ABIDJAN, Côte d’Ivoire – This review of the cocoa market situation from the Internatonal Cocoa Oraganization (Icco) focuses on the prices of the nearby futures contracts listed on ICE Futures Europe (London) and ICE Futures U.S. (New York) during the month of February 2020. It aims to highlight key insights on expected market developments and the effect of the exchange rate on the US-denominated prices.

Chart I shows the development of the nearby futures prices on the London and New York markets at the London closing time. Both prices are expressed in US dollars. Chart II depicts the change in the US dollar-denominated ICCO daily price index and the US dollar index in February.

Chart III presents monthly average cocoa butter and powder prices in Europe and the United States since the start of the 2019/20 crop year. 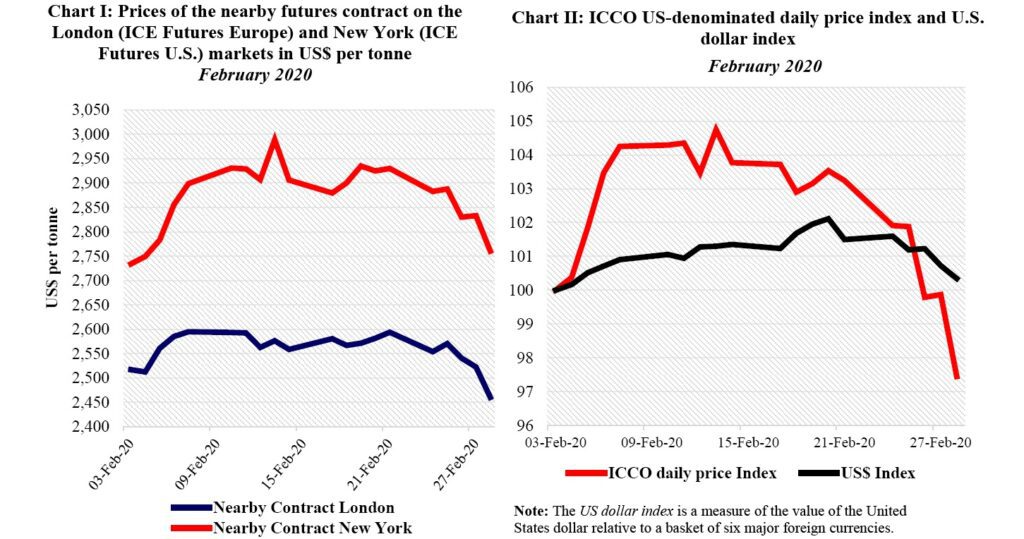 This bullish stance was a market response to the less conducive meteorological conditions that prevailed in West Africa’s cocoa growing regions.

Thereafter, cocoa futures prices remained virtually flat on both sides of the Atlantic during the time frame 12-21 February. In the course of the last trading week of the month under review, prices plummeted by 4% on both the London and New York markets.

Indeed, they dropped from US$2,554 to US$2,460 per tonne in London while in New York, they ebbed from US$2,883 to US$2,760 per tonne. At the time, market participants were anticipating an improvement in weather conditions in Côte d’Ivoire as well as a slowdown in the demand for commodities (including cocoa) as the spread of the Coronavirus created concerns for the world economy.

Moreover, the differential in prices on both the London and New York markets averaged US$313 per tonne and ranged between US$217 per and US$413 per tonne.

During the period under review, the MARCH2020 contract traded in contango vis-à-vis MAY-2020 in London.

Moreover, the share of certified stocks in the total stocks of cocoa beans held by the European Exchange licensed warehouses increased from 67% or 104,130 tonne at the start of February to 72% or 110,390 tonnes by the end of the month.

On the contrary in New York, the MARCH-2020 contract priced with a premium over MAY-2020 during the analysis period. The percentage of certified stocks of cocoa out of the total stocks of the United States Exchange licensed warehouses, moved from 1% or 1,899 tonne on the first trading day of February to 3% or 7,173 tonnes on the last quotation session of the month under review.

Chart II depicts the US dollar index remaining virtually flat during the analysis period whilst the ICCO daily price index weakened by 2.5% compared to its value at the beginning of February 2020. Hence, the deterioration in cocoa prices was mainly fueled by market fundamentals other than currency movements. 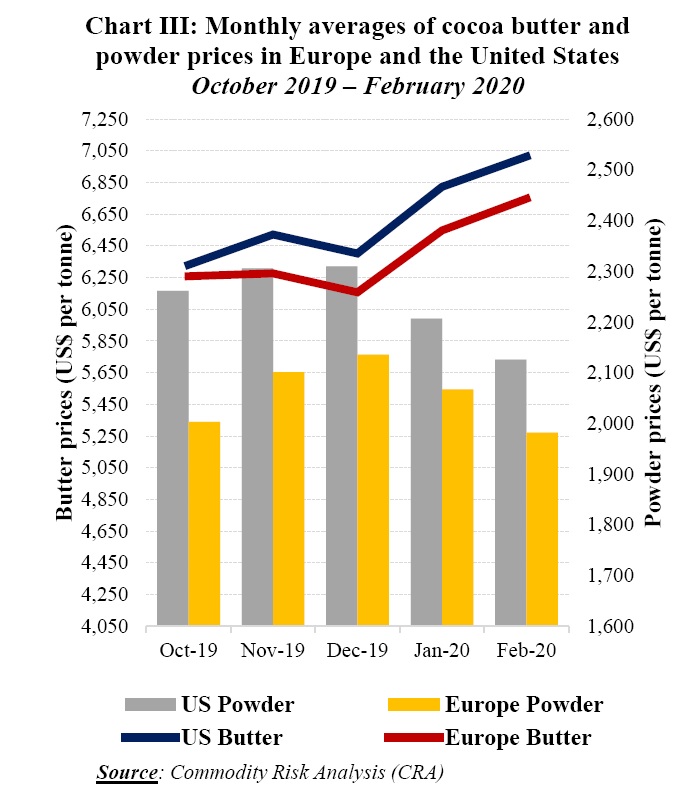 While the 2019/20 main crop draws to a close, arrivals data show stronger cocoa supplies from West Africa. Indeed, Côte d’Ivoire port arrivals indicated that the country is running towards another year of record production.

As at 08 March 2020, cumulative arrivals at Ivoirian ports were seen at 1.567 million tonnes, up from 1.564 million tonnes recorded during the same period last season. In Ghana, the production is forecast to experience a precarious recovery to 850,000 tonnes, despite the acute prevalence of cocoa-related diseases and other challenging issues.

The first forecasts for the 2019/20 cocoa season published by the ICCO Secretariat in its latest issue of the Quarterly Bulletin of Cocoa Statistics reveal an anticipation of a lower growth in grindings compared to the previous cocoa season. Grindings are expected to expand to 4.861 million tonnes, up by 56,000 tonnes.

This higher forecast reflects the continuous increase in demand which is mirrored by the steady growth in cocoa processing in origin countries as well as an increase in the demand for chocolate with high cocoa content.

It is projected that processing activities will grow by 6.9% to 1.237 million tonnes in Asia and Oceania whereas a growth of 1.9% to 1.054 million tonnes is anticipated in Africa.

On the contrary, in the Americas, processing activities are forecast to shrink by 3.4% to 870,000 tonnes while a 1.5% drop to 1.700 million tonnes is envisaged in grindings activities for Europe as compared to the level attained in the same period of the previous season.