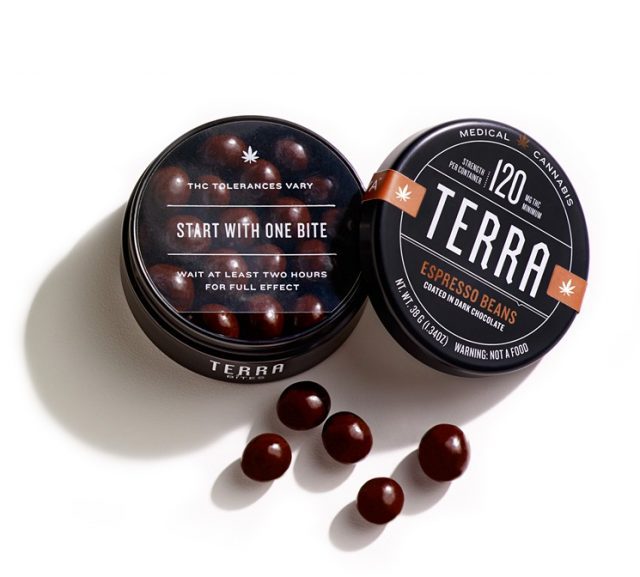 The first time you twist open the lid on a tin of Kiva Terra Bites, the stickers on its sides crack. When the seal breaks, you’ll discover a thick cellophane disk placed gently atop the chocolate covered espresso beans inside.

On its face, written in elegant font, is the courteous instruction, “THC tolerances vary. Start with one bite. Wait one to two hours for full effect.”

It’s at once an invitation to nip on one of the glazed chocolate beans rattling in the tin below and an unstated assurance: These will not be one of those edibles that leaves you unexpectedly useless in the middle of a Wednesday. We know you have shit to do.

According to Kristi Knoblich one of the COOs of Kiva, the typical user of Terra Bites espresso beans, is someone “who is concerned about getting the right amount of cannabis because they probably have kids or a job where they have the right amount every time.”

The beans, which contain 5 mg of THC each, were, according to Knoblich, born of patient demand for an easy way to obtain a small, reliable dose. They are also, of course, made out of coffee, which may make them the ideal edible for productive patients and stoners.

The caffeine aspect of the beans is essential to the “niche market” that Knoblich says the company is targeting with the beans. She has been told at trade shows and dispensaries that they are a favorite in Silicon Valley, where engineers like to use the beans while coding.

However, the largest market for the beans is Southern California. Nearly 70 percent of the bean’s sales are to Los Angeles-area dispensaries, where she says creative types have used them to expand their minds while meeting their deadlines.

“A lot of people report that it’s a nice combination that helps them focus,” says Knoblich. “It’s an awesome delivery system that gives you that perfect amount of cannabis and caffeine.”

The amount of caffeine in a single espresso bean is actually relatively small, especially for someone who’s no stranger to pulling all-nighters.

Each bean contains only 5-8 mg of caffeine, or about 10 percent of what’s in a single cup of joe. Still, most coffee drinkers are familiar with the way the mind percolates at the mere smell of java.

That earthy scent is a cue to your brain that it’s time to get to work. Some studies have also indicated that THC itself, when used in small doses, may improve focus in individuals with ADHD.

Kiva’s flagship products are its upscale chocolate bars, and the company refers to the process of coating the beans in chocolate as an “art.”

Knoblich and her partner were taught the craft of “panning,” as its called, by an Ohioan named Kevin Dolan, who Knoblich refers to as the “panning guru.” He recently passed away, but for years, Dolan remotely mass-produced chocolate for a number of major corporate candy companies.

In his free time, he used the same equipment to teach people like Knoblich the delicate art of panning: first, chocolate is carefully weighed, melted down and mixed with THC oil. The beans are then placed into a tumbler, which resembles a cement mixer. As they whirl around around, the melted chocolate is drizzled over them and spun continually until each bean is evenly coated, or “engrossed.”

Indeed, the uniquely focused buzz that these beans offer seems to be rooted in this synergy between caffeine, THC, sugar, and the placebo effect.

Users have reported the effect of these beans to be light and slightly euphoric. The mild and energetic high is also conducive to Los Angeles’s physically and socially active culture. These edibles will not render you too sedentary to go on that hike or so awkward you can only socialize with the cheese plate at the party.

According to Knoblich, even the packaging was designed with a “doer” on mind. “It’s a simple pop off of the lid, grab a bite, put the lid back on. There’s no unwrapping. There’s no breaking up. It fits a productive, busy lifestyle,” she explains.

InventHelp inventors develop convenient cup holder for use when enteri...