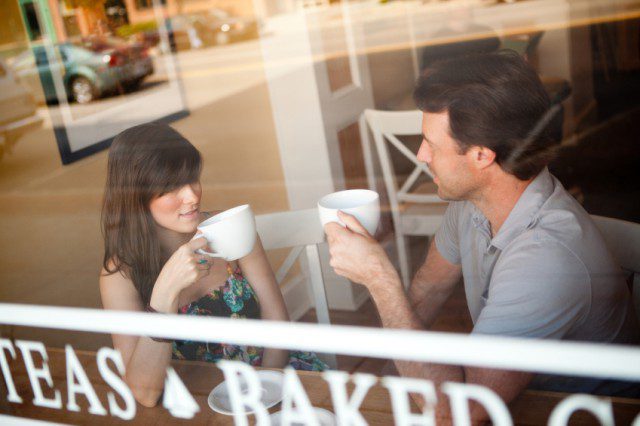 Recent findings from a survey by Starbucks Canada*, reveal  that café connections are alive and well, with more than one quarter (26 per cent) of Canadians surveyed saying they would consider their barista a friend.
Just in time for National Coffee Day on Monday, September 29, 2014, the survey of 1,000 online responses from the Canadian adult Internet population found that for many Canadians, cafés are more than just a place to pick up your daily brew:
Barista buddies: Nearly 40 per cent of respondents said they spend time interacting with their barista after they place their order. In fact, almost 20 per cent say they’ve shared personal stories with their local barista.
Love is brewing: Cafés are still a hot spot for date night. Fifteen per cent of Canadians said they would have their first date at a café, and nearly 30 per cent said they went to a café during their last romantic outing
Meet you there: More than 35 per cent of respondents said they have chosen a café for business, while almost one in four say they almost always choose a café as a place to meet with friends. They are also staying a while, with nearly one-third of respondents saying they’ve recently spent more than 30 minutes in a café.
Make it your own: More than 20 per cent of respondents said they customized their beverage on their last visit to a café, with almost one-quarter of those who personalized their drink doing so with the help of their barista. At Starbucks, there are more than 170,000 ways to customize your beverage and Starbucks baristas can help make it your own
At the heart of the personal connection Canadians have with their local cafés is their love of coffee. Data from the 2013 Canadian Coffee Drinking Study conducted by the Coffee Association of Canada found that coffee is the most consumed beverage (65 per cent) next to tap water (63 per cent) in Canada. The report, which looks at past-day consumption, also found that brewed coffee continues dominate the market. Approximately two-thirds of adult Canadians (65 per cent) said they consumed coffee in the past day.
Last year, Canadian Starbucks customers consumed enough brewed Starbucks® coffee to equal more than 31 million litres of water flowing over Niagara Falls. In fact, taking all the Tall (350 ml) cups of Starbucks® brewed coffee that Canadians consumed in 2013, stacked end-to-end, would equal the height of 5,707 CN Towers or the distance of 140 Vancouver Seawalls.
This National Coffee Day, Canadians can visit participating Starbucks® stores across Canada to sample Starbucks Thanksgiving Blend™. Starbucks Thanksgiving Blend™ is a flavourful combination of full-bodied beans from Sumatra, with hints of fine herbs, and beans from Guatemala, which add subtle spice, notes of cocoa and a pleasant sparkle. A spicy bold brew, Starbucks Thanksgiving Blend™ reveals subtle herbal notes when paired with turkey and stuffing and is also perfect with pumpkin pie.
About Starbucks National Coffee Day Survey
* The survey was written by Starbucks Canada and conducted using Google Consumer Surveys, September 9 – 14, 2014, based on 1,000 online responses of the Canadian adult Internet population.

Jde Peet’s announces the anticipated closing of the offer period