MILAN, Italy – The Board of Directors of Italmobiliare S.p.A., the mother company of Caffè Borbone, on July 29, 2020, reviewed and approved the consolidated interim financial statements at June 30, 2020. Italmobiliare S.p.A. is an investment holding company listed on the Milan Stock Exchange owner of a majority stake of 60% in Caffè Borbone, one of the top names on the national market and a leading supplier of single serve coffee. The remaining 40% share is held by the founder and Executive President of Caffè Borbone Massimo Renda.

The main changes in NAV are due to the distribution of ordinary and extraordinary dividends for a total of 76 million euro, the reduction in the market value of the investment in HeidelbergCement AG (-59.1 million euro) and other listed investments (-7.6 million euro, mainly attributable to the investment in Fin.Priv., a finance company that holds Mediobanca shares) against an overall increase in the value of the Portfolio Companies (+42 million based on the same scope of consolidation).

Taking into account the impacts of the Covid crisis on financial markets, for Italmobiliare S.p.A. the first half of 2020 closed with a negative result of 16.6 million euro (positive for 9.2 million euro at June 30, 2019).

Net income and charges from equity investments are positive for 8.6 million euro, down on the 10.1 million euro at June 30, 2019, mainly due to the lower dividends collected or approved (-11.5 million euro, mainly due to postponement of the distribution of dividends by Caffè Borbone following the Covid-19 risk, which should be distributed in the second half of 2020), partially offset by lower write-downs of certain equity investments.

Net gains on investments of cash and cash equivalents show a negative balance of 10.9 million euro (positive for 12.1 million euro at June 30, 2019). The change is mainly due to the performance of trading investments and investment funds penalized by the negative performance recorded by international markets because of the pandemic. 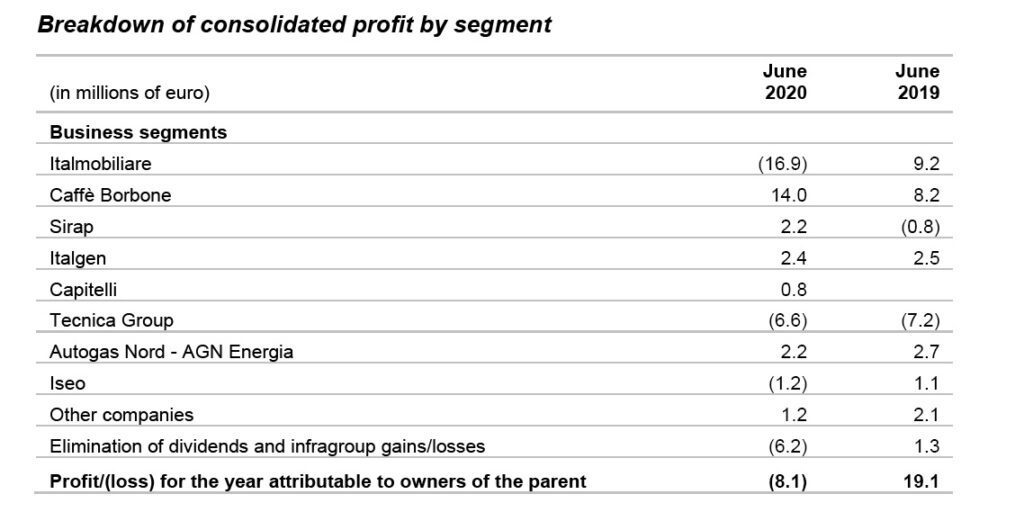 Performance of the main Group companies 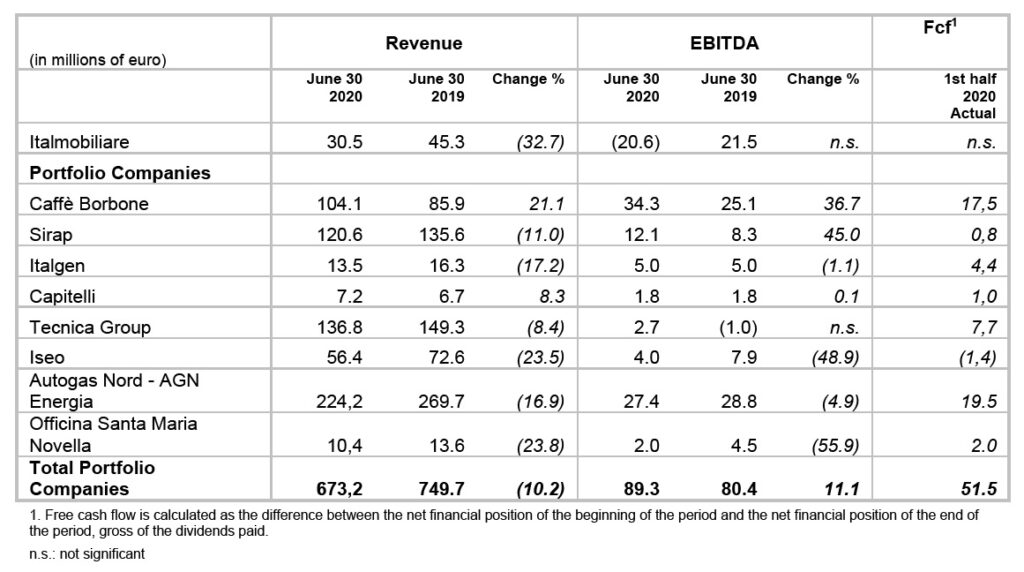 Overall, the first half of the year showed that the Portfolio Companies had a significant degree of resilience, brought about by the constant and proactive focus on the operating performance of the individual businesses and by a diversified mix of investments, which made it possible to limit the negative effects on the activities most exposed to the fallout caused by the Covid pandemic. Overall, despite a reduction in aggregate revenue, operating results improved compared with the situation in mid-2019.

In general, the half year for Caffè Borbone was characterized by a very positive performance on the part of the capsule business, while at channel level the growth trajectory of the online channel and large-scale distribution continues.

Despite the half year characterized by the effects of the global pandemic, performances benefited from some specific features of the company compared with its competitors, such as the excellent quality/price ratio, its strength in the online channel and the very low weighting of the Ho.Re.Ca. channel. In the first half of 2020, Caffè Borbone recorded a turnover of 104.1 million euro, an increase of 21.1% compared with the same period of the previous year.

The gross operating profit for the first half of the year came to 34.3 million euro, with a margin of 32.9% of turnover, a marked improvement compared with the first half of 2019 (+3.7%), mainly thanks to the effect of economies of scale on overheads.