The results of the research show that approximately two-thirds of adult Canadians (65%) consumed coffee in the past-day.

Specialty Coffee beverages and iced/frozen coffee are strongest among ages 18-34. Those aged 18-24 are less likely to drink coffee yesterday. In addition, those 18-24 year olds who do drink coffee tend to drink fewer cups. 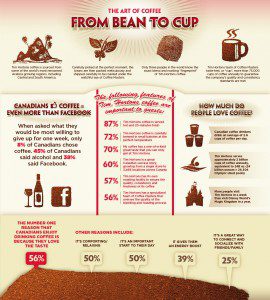 “One of the features of the out of home Canadian coffee market is accessibility through the high number of outlets per capita,” says Sandy McAlpine, CAC President. “In fact, coffee is second only to Italy in terms of menu importance for away from home coffee consumption.

Further, the single cup phenomenon has dramatically changed the grocery store shelf and the at home coffee drinking experience for many Canadians.”

The primary objectives of this study in 2013 were to:

The CAC is the primary advocate for the coffee industry in Canada.

The Association exists to undertake a leadership and spokesperson role to effectively address collective industry issues and enhance the coffee beverage experience by providing members and consumers with opportunities to improve coffee beverage knowledge and skills.

For over 20 years we have advocated on behalf our membership on government policy and regulations.  We work with all levels of government and in partnership with other related industry associations to influence outcomes, ensure our objectives are met and that our interests are both promoted and protected.

We endeavor to be a credible, comprehensive and accessible source of information and provide useful resources and valuable knowledge through targeted research and communications. This advocacy is funded by and depends on the commitment and the dedication of our membership.