Sales abroad of processed coffee were flat at 355,325, mostly of Robusta.

From January to November, Brazil exported coffee to 121 countries. The United States remain at the top ranking, Germany is in second place, Italy in third, Belgium in fourth, and Japan is in fifth place. 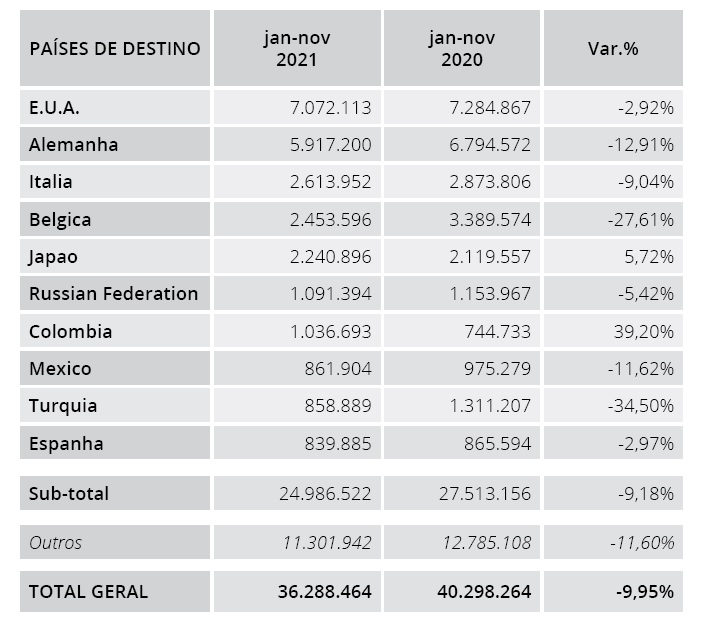 From January to November 2021, Brazilian coffee exports reached an accumulated revenue was $5.4 billion, a 5.9% growth compared to the same period in 2020.

The positive performance in revenue is due to a scenario of high exchange rates and international coffee prices, according to the president of Cecafé, Nicolas Rueda. “We have been experiencing moments of very high volatility in the market, with prices approaching historical record levels in the local currency (Brazilian real).

The average export price in 2021, USD 148.81 per bag, is the highest since 2017. Along with this, the dollar remains heightened against the Brazilian real, favoring the growth in the inflow of resources to Brazil with coffee shipments,” he explained in a note.

The drop in export volume is a result of logistical bottlenecks in global sea trade and the smaller crop harvested by Brazil in 2021, according to the president of the organization.

“We continue to face a dispute for containers and for space on ships amid successive cancellations of bookings, cargo rollovers and extremely high freight charges,” said Rueda.

“This scenario is worrisome because industry experts indicate that it will drag into 2022 due to the large volume of agricultural products accumulated in the ports of Brazil, which will impact the performance of our shipments,” Mr. Rueda concluded.