This is an increase of 0.5%, or a little more of 200,000 bags, compared to the third estimate released in September.

For the first time in more than 20 years, Brazilian output has fallen for two successive seasons. The drop in production was primarily due to the severe drought that affected most of the main coffee-growing areas during the summer season. 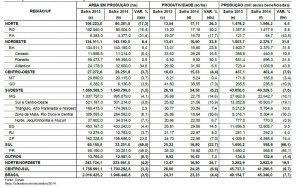 Despite lower productivity, Sao Paulo – the second-ranked Arabica-growing state after Minas Gerais – witnessed a 14.4% surge in production to 4.59 million bags thanks to the increased planted area revealed by the most recent field survey.

Bahia recorded the biggest jump in production (+31.8%) with a harvest reaching 2.3767 million bags. Output rose also in Rondonia (+8%), while Parana reported the largest drop in production, hurt by frost last year as well as drought in early 2014.