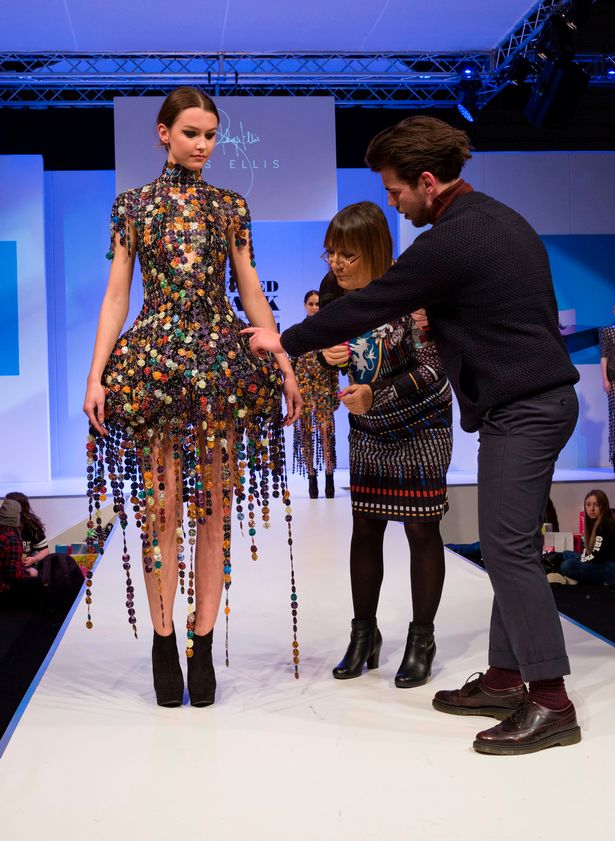 BIRMINGHAM, UK – Birmingham designer Rhys Ellis has come up with a novel way of recycling coffee pods – by turning them into stunning catwalk dresses.

His quirky collection, each of which features 6,000 repurposed coffee capsules, is now being showcased at Selfridges in Birmingham.

Rhys came up with the novel idea after spending time in Milan as part of his undergraduate degree in Fashion Design at Birmingham City University.

Whilst there he studied at the Politecnico di Milano design school alongside world-renowned tailor, Guiltiero Fornetti.

“The year in Italy was a great experience for me,” says Rhys, 25, who is originally from Kings Norton and now living in Shoreditch, London.

“Not only was I being trained by one of the world’s most distinguished and experienced bespoke tailors who, at the age of 74, teaches some of the most up-and-coming talent from brands such as Armani and Versace, but there is a coffee culture that I hadn’t seen before.

“It was while I was in one of the markets that I saw a lady making very simple jewellery from these coffee pods and something just clicked and I knew that I could create dresses this way.

“I also liked the idea of using material that would otherwise be thrown away.”

Rhys creates each of his dresses by hand, and this collection is based on the theme of underwater and the environment.

The dresses will be on display at Selfridges for the next three months as part of Selfridges’ Material World project which looks at how materials are made and how to make them more sustainable.

“To see my work on display at Selfridges is just incredible,” adds Rhys.

“I used to work in one of the concessions at the Birmingham store when I was studying and now to see my work on display in my city just makes me so proud.”

Sam Watts, general manager at Selfridges Birmingham, said: “The dresses have only been on display for a few days and already many of our customers are stopping and noticing them.

“For us to be able to proudly display and support the work of an upcoming and talented Birmingham fashion designer in his home store is an honour.

“We know that Rhys is going to be moving onto incredible things in his future. We’ll be proud to have been able to help in our own way.”