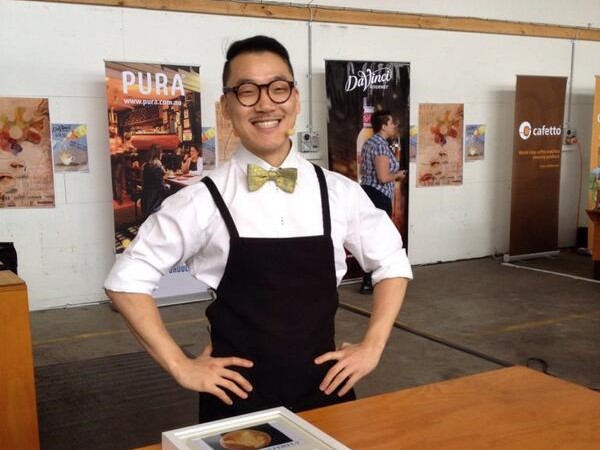 A jubilant Caleb Cha, Australian Latte Art champion from Cafenatics in Melbourne competed, and won, in the solid favourite WLAC in front of an admiring world audience and an elated Australian home crowd on livestream, taking the country’s winnings to two World championships this year.

Norway also took home two World titles from the event, WBrC and WCRC. Current World Barista Champion Australian Sasa Sestic, an avid supporter, was present at the finals performance in Gothenburg. Caleb’s victory was made even sweeter after he proposed to his girlfriend and coach, Alice Jeong, on the World stage, and she said ‘yes!’

His win is an amazing feat when you consider he only entered his first Latte Art competition a year ago, in which he competed and placed runner up in both the Victorian and Australian Latte Art championships. It was enough to motivate him to continue and ultimately achieve this great result in Gothenburg, all within a year, an event that will propel his coffee career forward.

Caleb always puts it down simply to practice. “The more you practice and repeat, the better and sharper your patterns become. And, the more confident you become, pouring becomes second nature and you develop steady hands. This lets you work faster with less errors”, he says.

“I can thank Erin Sampson for sharing her tips and tricks with me during last year’s competition prep[aration], and again this year both Erin and Jade (from Veneziano) helped me out with some competition style run-throughs, it definitely helped”, explains Caleb.

When we spoke to Caleb after the heats he reported he was feeling great, though he felt his now famous zebra pattern could have been better. “It [the zebra design] could have been more perfect, but I am aiming to improve it for the finals. I’m aiming for better contrast, more definition… You will see the best design ever!” he said with confidence. When asked if he’d take some time off after the competition he replied with, “Oh no, I must get back, my bosses [at Cafenatics] need me, they were good enough to give me the time off to come here and be a part of it all.”

However since his win, it appears things may not go back to normal as he’s intended, as he was immediately surrounded by sponsors and inundated by fans for photos and ‘selfies’. At the time of the announcement, his initial reaction was one of disbelief, but he eventually came to. After his win, we asked him again, “What are your plans now?”. “I don’t know”, he replies, with a smile. And, we believe him.

Caleb thanks all who supported him including his number one support Alice, his bosses at Cafenatics Equitable Place and 367 (Melbourne), Joseph Haddad and the team at Code Black Coffee Roasters, Australians Lance Brown and Jeremy Regan judging at WLAC, and everyone at Veneziano.

He also gives a huge thanks and appreciation to Cafenatics, Pura Milk, Cafetto, Service Sphere, Mahlkönig and MICE2016 for their generous support in getting him to Sweden.