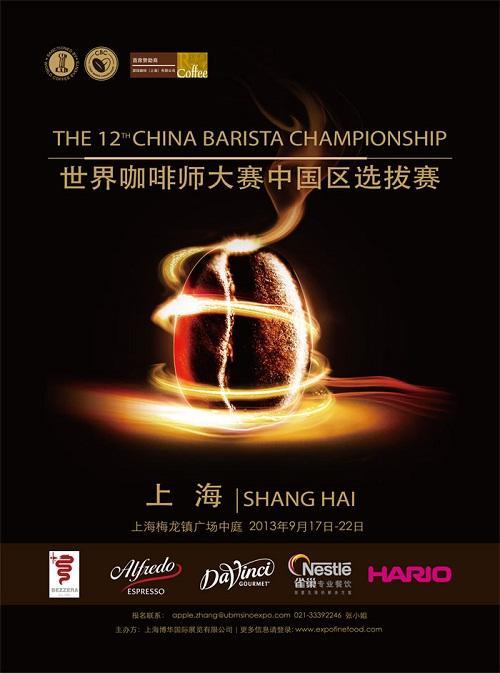 SHANGHAI, People’s Republic of China — China Barista Championship (CBC), Shanghai Division will officially kick off on September 17th-22nd at Shanghai Westgate Mall as one of the featured events of Shanghai Tourism Festival.

For the entire 6 days, visitors have the opportunity to appreciate the finest coffee products from Italy, Switzerland, Japan and Brazil, as well as exposure to a series of bartending master classes and gelato sample tasting.

Battle of Shanghai for Coffee

As usual, CBC Shanghai Division will have three days to battle out the winners for the China final to be held in April 2014.

From September 18 to 20, visitors will have the chance to enjoy performance and coffee art created by top contenders coming from Shanghai and surrounding regions.

Each competitor will prepare 4 espressos, 4 cappuccinos and 4 original signature drinks within 15 minutes. Each drink will be judged upon its taste, clarity, creativity and skill.

China Barista Championship is proudly supported by A players among the coffee industry including HARIO, WEGA, Lavazza, Alfredo, JASCAFFE and Nestle in order to provide first grade ingredients and equipment to baristas throughout the competition.

China Barista Championship (CBC) is the exclusive professional competition authorized by World Coffee Events (WCE). CBC aims to provide a platform for coffee professionals and enthusiasts to share, compete and celebrate. CBC was introduced to China by Shanghai UBM Sinoexpo in 2003. It has become the cradle of up-rising young coffee professionals in China. CBC has marched into her 12th year with 20+ division competitions covering East, North, and Southwest region of China. Champions representing 20+ division competitions will gather at HOTELEX Shanghai 2014 to battle it out for the exclusive spot to compete at World Barista Championship 2014.