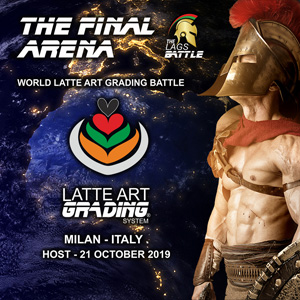 MILAN, Italy – Coffee, with its irresistible aroma and the shot of caffeine that keeps the body energised and the mind alert, seems an ideal subject for a challenge, which is after all a championship is all about. And as usual you could almost feel the adrenalin pumping in halls 14, 18, 22 and 24, where a variety of competitions were held to find the best “baristas”.

One of the most crowded events, one that attracted a huge amount of interest, was the World Latte Art Battle Championship.

The discipline, which is all about creating intriguing, complex patterns in frothy milk, is clearly growing in popularity. This year’s champion was home country Italy, which beat China – the winner of the last edition – with a heart-stopping challenge, in which the judges even had to resort to VAR (Video Assistant Referee) before they could agree on one point.

The eventual winner, outclassing all the rest here as in many other international competitions, was Italy’s very own Manuela Fensore, whose highly personal style won her the title of World Latte Art Grading Champion 2019. The winners in the other levels included Paola Torres, Maurizio Boi and Fabio Scacciaferro.

And Hostmilano also saw the crowning of other champions. One of these was in the Milano Latte Art Challenge, for which South Korea’s Um Paul was declared the winner, repeating his success at the 2017 edition of Host.

Last but not least, the Villaggio del Caffè Altoga was the setting for the 6th Italian Café Gran Prix, the winner of which was Paolo Rossi, who beat Fabio Dotti and Francesco Sussarellu. This is a “historic” prize, the first edition of which was held at HostMilano no less than 12 years ago.