We’ve all had crappy coffee before, but a cup of this one costs $10 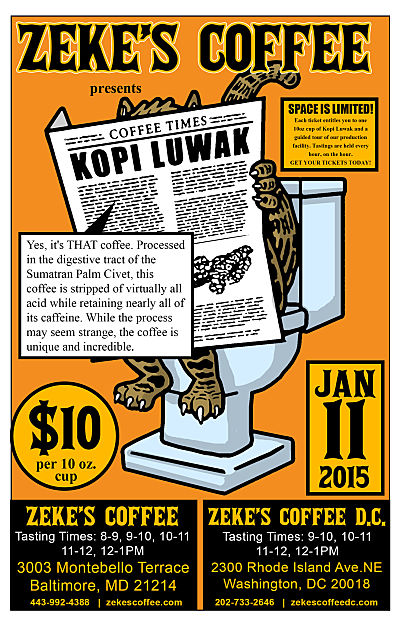 By Tim Carman
Blame it on “The Bucket List.”

The 2007 buddy flick starred Morgan Freeman and Jack Nicholson as two terminally ill dudes trying to pack their final days with all the adventures they had skipped during their healthy years. One of the comedy’s recurring bits involves the Nicholson character, a health-care tycoon, and his pompous affection for kopi luwak coffee, “the rarest beverage in the world,” as he calls it.

Despite learning his beloved beverage is brewed with beans that have coursed through the digestive tract of wild Asian palm civets — a, ahem, crappy process that’s supposed to mellow the coffee’s acids — Nicholson’s character apparently launched an international craze for kopi luwak. That, in turn, has led to fraudulent products and, even worse, to poor captive civet cats going loopy in their cages, all so a privileged few could say they sipped on rare Indonesian “cat s— coffee,” as the pricy product is (sort of) affectionately known.

John Kepner, owner of the Zeke’s Coffee on Rhode Island Avenue NE, promises his kopi luwak tasting on Jan. 11 will have no beans sourced from these unfortunately confined cats fed a poor diet of only coffee cherries. Kepner’s civet coffee, going for $10 for a cup, will be brewed from beans collected in the wild. Or to be more precise (and graphic), from the civet droppings collected in the wild and then cleaned and processed.

“Some poor guy is collecting it under the coffee trees,” Kepner deadpans.

The Zeke’s location in Baltimore started hosting kopi luwak tastings in 2008, but this is the first one at the D.C. shop. Kepner says he and his family have been buying from the same source from the start: Luwak Coffee, a boutique roaster based in Bali, Indonesia. Zeke’s buys civet-digested green beans from Sumatra for a $180 a pound, which is still $50 cheaper than the roasted beans that Luwak Coffee peddles (although, as Kepner notes, there is some weight loss when roasting a pound of green beans yourself).

At those kind of prices, this coffee has to taste better than the pre-ground, cat-processed manure I reviewed almost three years ago (and which gets quoted around the ‘Net as if it were the last word on all kopi luwak, which it is certainly not). Kepner says his beans, roasted to a medium-brown “city” roast, remind him of Kona coffee or “an extra-smooth Indonesia coffee.”
“If your favorite coffee is a bright, lively, acidic coffee, it’s not the coffee for you,” he says. “You’re doing it more for the experience.”