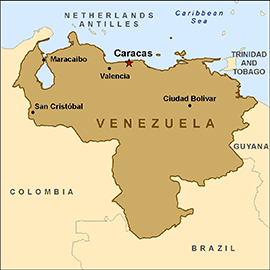 MILAN – The Venezuelan coffee sector is struggling with shortages of fuel, agro-chemicals, and replacement parts, says USDA’s Foreign Agricultural Service in its latest report on Venezuela. In MY 2020/21, post forecasts continued decreases in production based on input limitations.

Post also forecasts sharp decreases in imports of green coffee beans as the Maduro government focuses its limited resources on purchases of staple foods over coffee.

Tight supplies of coffee are driving up prices, out of the reach of most consumers. Consumption in the current and forecast years is down sharply. The current situation will likely persist until a shift in the policy environment allows for access to agro-inputs and capital markets.

In MY 2020/21, post forecasts that production will fall to 480,000 bags. [Note: One bag contains 60 kilograms, unless otherwise noted.] The forecast level is a decrease of 70,000 bags, or 13 percent, from post’s MY2019/20 estimate of 550,000 bags. Ongoing shortages of fuel and agro-inputs all but guarantee decreases in coffee production. Necessary fertilizers, herbicides, and fungicides are not currently available due to the country’s macroeconomic situation. Without these inputs, established trees will produce lower yields and many young trees may die. Additionally, continued fuel shortages will limit farmers’ ability to bring harvested beans to market.

In the current year, post is decreasing production to 550,000 bags, down 50,000 from USDA’s official estimate of 600,000 bags. The decrease is explained by shortages of fuel and agro-chemicals, as well as a 20-day break in rainfall during a pivotal time for plant development. Industry contacts report that many trees lost foliage this season due to water and disease stress.

Coffee rust remains troublesome across Venezuela. Older trees have proven more resistant to the disease. Younger plantations, however, can be quickly damaged by the fungus if left untreated. With the current shortages of fungicides, rust is expected to not only tamp down current year production, but also to damage young trees negatively impacting future production.

Acute fuel shortages in the current year also bode poorly for Venezuelan coffee production. Industry associations assert that they no longer have access to enough fuel to efficiently harvest and transport crops to market. This has become a common complaint across all sectors of Venezuelan agriculture. Shortages are expected to continue, as the Maduro regime’s fiscal shortfall limits its ability to import refined petroleum products. Coffee production in the forecast year will depend heavily on how the regime manages these shortages.

Post estimates current year area planted at 200,000 hectares and area harvested at 170,000 hectares. FAS Caracas is not proposing changes to USDA area or tree estimates for MY 2018/19. Those estimates remain unpublished.

As alluded to above, Venezuelan is currently facing massive shortages of agricultural inputs including, fungicides, herbicides, fertilizers, machinery, and fuel. Venezuela once produced a majority of its agricultural inputs. However, consecutive socialist governments nationalized those firms producing inputs and, once under public ownership, production began to wane. In recent years, imports of fertilizers, agrochemicals and even fuel replaced domestic production. Currently, the Maduro regime finds itself without the necessary capital to import agro-inputs, some of which are now subject to international sanctions.

Coffee production specifically suffers from a lack of fertilizers to boost flowering, herbicides to limit competing plants, and fungicides to protect trees from coffee rust. Furthermore, a dearth of fuel and replacement parts for equipment mean that tractors are not operating and the trucks that would have brought coffee to market are either not operating or focused instead on transporting staple food products.

The input shortages described above are pushing yields downward in both the current and forecast years. Young trees, intended to boost future production, are being damaged or killed by rust, while older trees’ yields continue to decline without additional fertilizer. Yields will continue to drop, until the policy environment allows for the import or production of necessary agro-inputs.

There are three major buyers of coffee in Venezuela: Paramo, Inversiones Botalon, and Inversiones Amanecer. While a hodgepodge of policies once controlled the sale and distribution of coffee, it is unclear that those measures are still being enforced. For example, the Maduro regime historically required producers to deliver 20 percent of their product to government roasters. Additionally, coffee could only be moved with permission from Sunagro (Superintendencia Nacional de Gestión Agroalimentaria). These policies seem to have fallen into disuse.

On Friday, April 24, 2020, the Maduro government established a list of 27 products subject to price controls The regime claims to have the statutory authority to set price controls under the Agreed Prices Law of 2017, as well as the authority to limit private sector profits under the Fair Prices Law of 2013. Coffee is among the 27 products. Initially the retail price was set at $1.00, or 171,072 Bolivares, per 500 gram package. The list has been subject to several price increases since the initial announcement. It is unclear if and how these prices will be enforced.

Post forecasts that domestic consumption in MY 2020/21 will fall to 484,000 bags on continued tight supply and high prices. Post is also decreasing USDA’s official consumption estimates for MY 2019/20 downward from 1,197,000 bags to 553,000 bags. The sharp decrease in the current year is based on the Maduro regime’s near complete cessation of green bean imports in MY 2019/20. The current tight supplies when combined with other inflationary pressures on the Venezuelan currency have driven coffee prices up sharply.

Coffee prices in MY 2019/20 are out of reach for most Venezuelan consumers. Currently, one kilogram of coffee retails for around $8.00, while the Venezuelan monthly minimum wage is approximately $2.50. Only the wealthiest few percent of Venezuelans can purchase coffee. Lower quality products, often a mix of roasted coffee and corn, are replacing coffee for many consumers.

Like others in the region, Venezuelans typically drink coffee. As their purchasing power has eroded, consumers have been forced to use their limited resources on food products. Similarly, the Maduro regime’s deteriorating financial situation has forced it too to focus on imports of staple food products. Until Venezuelan coffee producers ramp up production or imports resume, domestic coffee consumption will stay well below historic levels.

In MY 2020/21, post forecasts that coffee bean imports will fall to 20 metric tons, or 333 bags. Without a new source of revenue, the Maduro administration will forgo coffee bean imports to focus on purchases of staple food products. The limited imports that do arrive will be imported by private sector retailers catering to wealthy consumers. These same firms are expected to import 200 metric tons (3,967 bags GBE) of roasted and ground coffee, as well as 50 metric tons (2,167 bags GBE) of soluble product.

In MY 2019/20, post estimates that coffee bean imports will reach only 400 bags, well below USDA’s official estimate of 600,000 bags. Private sector importers are expected to import 234 metric tons (4,641 bags GBE) of roasted and ground coffee, and 54 metric tons (2,340 bags GBE) of soluble product. The current year totals are based on actual shipments to date. The fiscal constraints on the Maduro regime have all but halted shipments of coffee beans to Venezuela.

As inputs have become scarce, the quality of Venezuelan coffee has suffered, making it less competitive on export markets. Quality issues and tight domestic supplies explain the drop in exports.
The only potential exception will be cross border trade with Colombia and Brazil. With fuel shortages making delivery to Venezuelan roasters all but impossible, farmers near the border will likely opt to move some product to neighboring countries.