Arabica production is estimated at 39.9 million bags, down 1.1 million bags compared to the previous estimate, due to lower than expected agricultural and de-husking yields, as well as lower than average coffee screen sizes in major Arabica growing areas.

Despite the concerns about the frost that occurred last July in Arabica producing regions in southern and southeastern Brazilian states, it virtually caused insignificant damage to the coffee output. Robusta production is estimated slightly down at 18.1 million bags, a 200,000 bags drop compared to the previous estimate. The MY 2018/19 coffee crop estimate remains unchanged at 64.8 million 60-kg bags.

The harvest of the Robusta and Arabica beans is over and post contacts report that approximately 50 to 60 percent of the current crop has already been marketed by producers.

Coffee traders report the Robusta bean and cup quality to be average and similar to the previous season, whereas the Arabica bean and cup quality are reported below average. ATO/Sao Paulo estimates for area harvested and tree inventory remain unchanged from previous figures. The table below shows production estimates by state from MY 2015/16 through MY 2019/20. 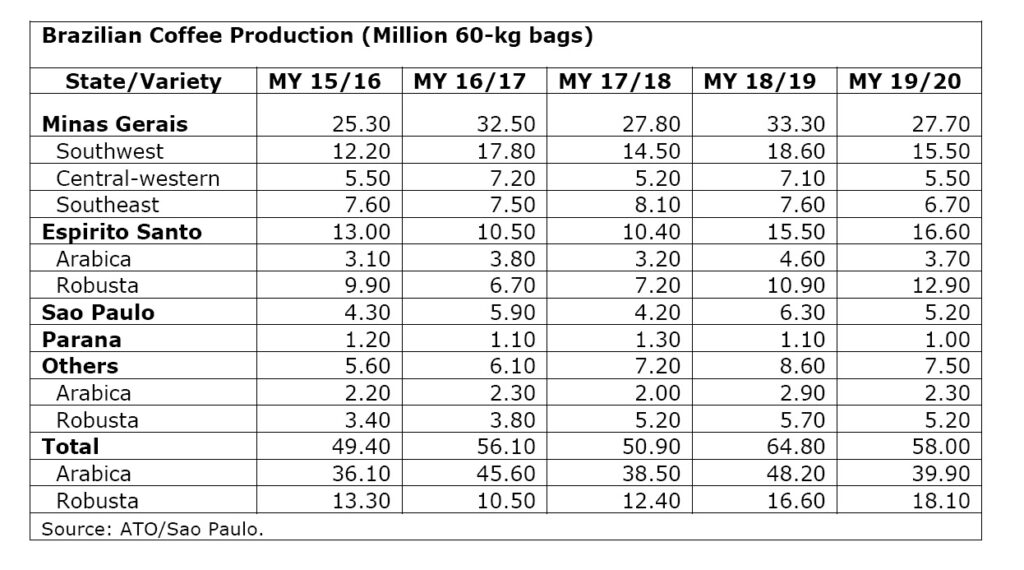 Post revised the Brazilian coffee yield for MY 2019/20 down to 28.43 bags/hectare, a one percent reduction relative to the previous estimate. Overall, higher production costs associated with stagnant coffee prices led to decreased crop management and use of inputs (herbicides, pesticides and fertilizers); therefore, affecting to some extent agricultural yields during the 2019/20 crop.

Irregular weather conditions in some producing areas also contributed to drive yields down. The graph below illustrates the evolution of coffee yields in Brazil since the 2010/11 crop.

In September 2019, the Brazilian government (GOB), through the National Supply Company (CONAB) of the Ministry of Agriculture, Livestock and Supply (MAPA), released the third official coffee production estimate for MY 2019/20. As reported by CONAB, coffee production is estimated at 48.99 million bags (34.47 million bags for Arabica and 14.52 million for Robusta coffee), a drop of 12.67 million 60-kg bags vis-à-vis the previous crop year (61.66 million bags).

The September 2019 coffee production estimate for MY 2019/20 released by the Brazilian Institute of Geography and Statistics (IBGE) shows the production of 3.017 million metric tons of coffee, or 50.3 million 60-kg bags (35.1 million bags for Arabica and 15.2 million for Robusta coffee), a decrease of 16 percent relative to the previous MY (59.88 million bags).

Both CONAB and IBGE use a different methodology to forecast coffee production than Post, and both are consistently lower than Post’s estimates. No official forecast has been announced for the MY 2020/2021 coffee production by CONAB or IBGE. Initial projections made by the coffee industry forecasts a significant larger crop in Brazil, mainly due to the on-year of the biennial production cycle of Arabica coffee plants.

Coffee Prices in the Domestic Market

The tables below show the Arabica and Robusta Coffee Index Price Series released by the University of São Paulo’s Luiz de Queiroz College of Agriculture (ESALQ). Average Arabica coffee prices in the local currency, the Real, during the 2019 harvest (June-September) remained virtually unchanged from the same period the year before, both in the local currency, the Real, and in US$ dollar terms, given that the exchange rate did not fluctuate significantly during these periods.

In spite of the lower coffee supply for 2019, Brazil’s coffee industry has already priced the value of the coffee bag for the current crop based on the expectations of abundant supplies next year. Given that the Arabica trees will be on the on-year of the biennial production cycle, production is expected to be higher. Therefore, current prices have remained stable.

The price spread between both varieties has consistently increased since 2017 due to the continuous recovery of Robusta production after years suffering from drought, thus pushing prices steadily down. The average price differential is R$ 122.80/bag for the April-September 2019 period compared to R$ 45.85 during the same period in 2017.

Euromonitor, a market research consulting company, has recently released a study that estimates total domestic coffee consumption for Brazil at 1.2 and 1.4 million metric tons of coffee (after roasting and grinding) for 2019 and 2024, respectively. ABIC has not yet released the November 2018-October 2019 coffee consumption survey.

Coffee exports for MY 2018/19 reached the highest export volume ever. Record figures were revised upward from 39.72 to 41.42 million 60-kg bags, green beans, to reflect updated information from the Brazilian Green Coffee Association (CECAFE). The volume represents record exports for the Brazilian industry. Green bean (Arabica and Robusta) exports are estimated at 37.38 million bags, whereas soluble coffee exports are estimated at 4.02 million bags. Brazil remains extremely competitive in the international market and the weak exchange rate has consistently encouraged exports. The Port of Santos in the state of Sao Paulo concentrates the majority of shipments, roughly 80 percent of total export volume.

According to the September 2019 coffee trade statistics released by the International Coffee Organization (ICO), total world coffee consumption for 2018/19 is estimated at 164.82 million bags, up 3.4 million bags relative to 2017/18 (161.42 million bags). Brazil represents over a 30 percent of total world exports and approximately 15 percent of the world consumption. 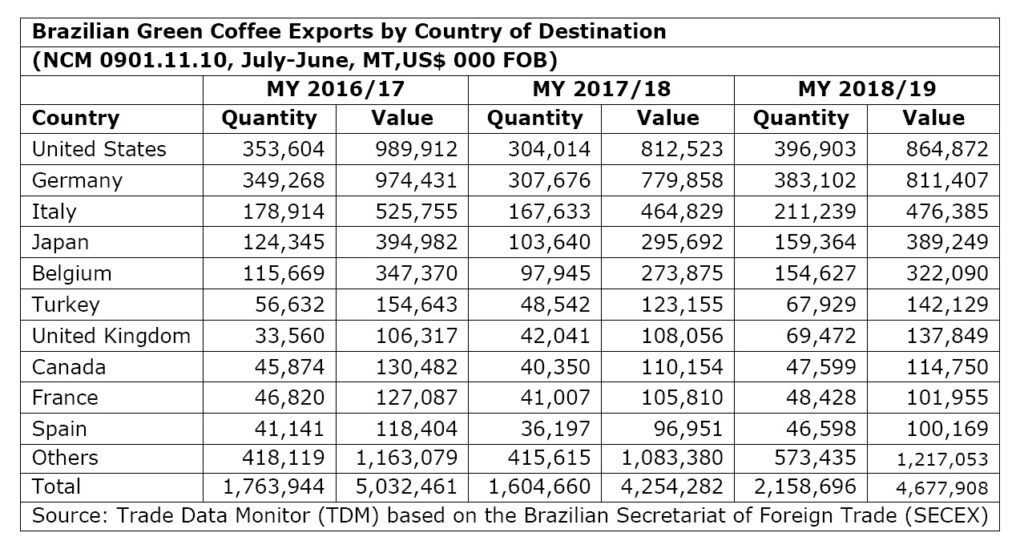 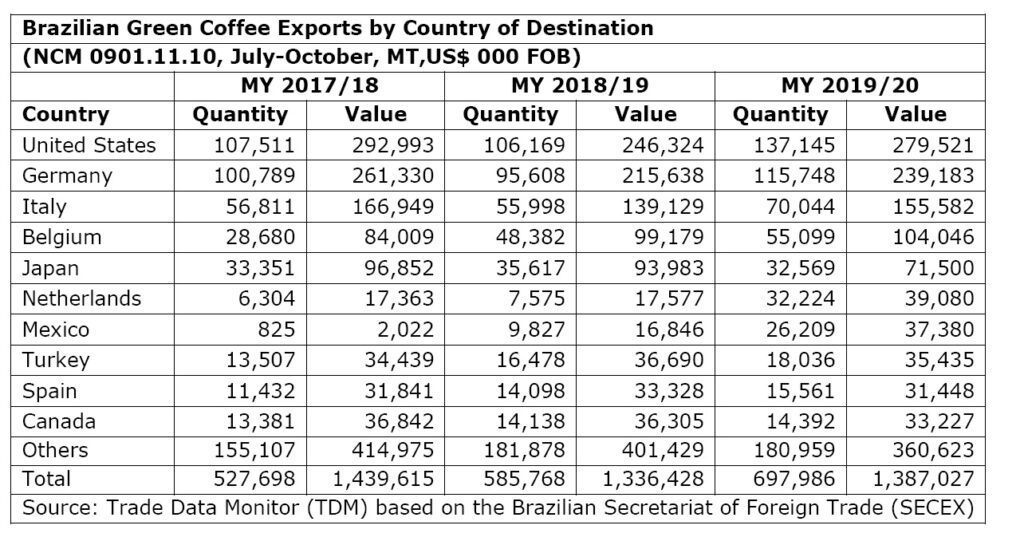 ATO/Sao Paulo estimates carry-over stocks for MY 2019/20 at 1.38 million bags, a decrease of 783,000 bags compared to the previous season, due to the lower coffee availability in the current season.

On October 17, the Ministry of Agriculture, Livestock and Supply (MAPA) successfully intervened for the coffee industry and the Brazilian government recreated the Coffee Policy Deliberative Council (CDPC), through Decree # 10,071. CDPC had been previously extinguished through presidential decree # 9,759 in April 2019, as part of the government overall strategy to eliminate and/or limit the action of all collegiate bodies in the public administration, which included CDPC as well.

CDPC is responsible for: approving the coffee crop plan, approve coffee agricultural and marketing research, approve crop forecasting, evaluate the market supply and demand, set technical and financial cooperative projects, both domestically and internationally, approve the use of the Coffee Economic Defense Fund (Funcafe) funds, among others. Recently, the Brazilian government reported a total of R$5,071 billion (US$ 1.26 billion) to finance the coffee sector during the 2019/20 crop season using funds from the Coffee Economic Defense Fund (Funcafe).

On June 28, the European Union (EU) and Mercosur reached a provisional agreement on a Free Trade Agreement (FTA), concluding two decades of talks. The final text and market access schedules still need to be determined. The EU will become the first major partner with which Mercosur has struck a trade agreement. The European Union is already

Mercosur’s biggest trade and investment partner and it’s second largest for goods trade. The four Mercosur governments, the 28 national governments of the EU and the European Parliament will have to ratify the deal before it enters into force.

According to the agreement, the EU would eventually abolish 82 percent of the taxes on Mercosur imports. Mercosur would gradually eliminate its duties on 91 percent of EU goods. The coffee industry is expected to directly benefit from the elimination of the current EU tariffs for soluble coffee (9 percent) and roasted and ground coffee (7.5 percent) in a 5-year phase out period. The Brazilian Soluble Industry Association (ABICS) forecasts an increase of 35 percent in sales after the import tariff is removed.