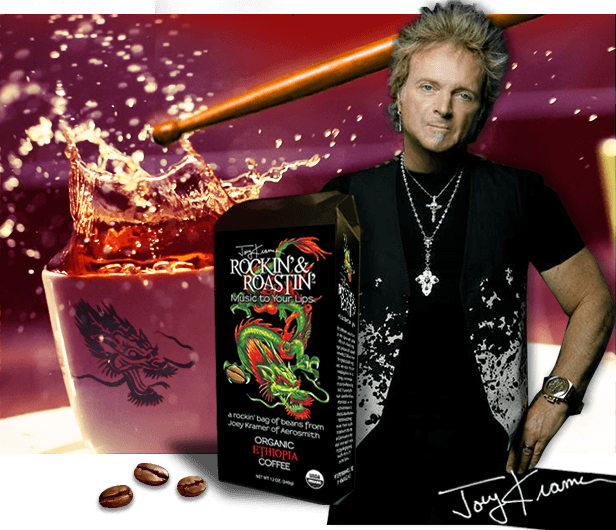 BOSTON, MA – Aerosmith drummer, Joey Kramer, soon will be Rockin’ & Roastin’ with the House of Blues throughout the country.

House of Blues Entertainment LLC is a network of live music concert halls and restaurants in major markets throughout the United States.

House of Blues first location opened in the Harvard Square neighborhood (Cambridge, MA) in 1992 by Isaac Tigrett, co-founder of Hard Rock Cafe, and Dan Aykroyd, co-star of the 1980 film The Blues Brothers.

The company was originally financed by Aerosmith, Paul Shaffer, River Phoenix, James Belushi and Harvard University. Today, the House of Blues is operated by Live Nation while Aykroyd and Belushi remain actively involved.

Felix Mussenden, Executive V.P. House of Blues Entertainment, said, “Joey is one of the world’s legendary drummers and Aerosmith has a long history with the House of Blues family. It was only natural for us to team up with Joey by bringing his Rockin’ & Roastin’ coffee into our House of Blues venues.”

“Becoming the official fresh brewed coffee of the House of Blues is an extreme honor,” said Frank Cimler, Kramer’s Rockin’ & Roastin’ business partner. “It has been a pleasure to facilitate this sponsorship and to have Rockin’ & Roastin’ present in one of the country’s most recognized and celebrated music establishments.”