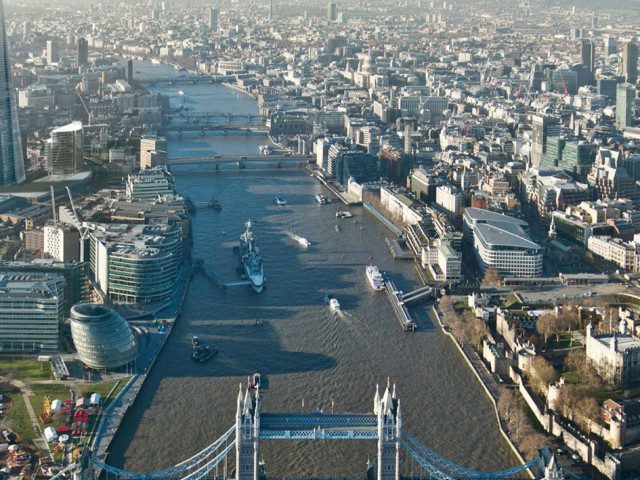 The scheme introduces coffee cup recycling facilities across the City and aims to collect and recycle half a million cups in the City of London throughout April, rising to 5 million by the end of the year.

Over 100 high street coffee retailers are offering recycling facilities and accepting coffee cups in their stores, regardless of where they were purchased.

There are unmissable Square Mile Challenge bins in the shape of bright yellow coffee cups in place on the City’s streets and cups will be collected at both Liverpool Street and Cannon Street stations during rush hour every week day throughout the month.

Employers are playing their part, with over 30 organisations based in the City including Lloyd’s, Deloitte, Prudential, The Barbican Centre, London Metropolitan University and major business premises such as The Leadenhall building (“The Cheesegrater”) collecting paper coffee cups in their offices, helping divert them into a new waste stream.

Every day up to seven million coffee cups are thrown away across the UK, with less than 1% of these cups thought to be recycled.

The tricky issue to date has been the plastic film on the inside of the paper cups, which means that the cups can rarely be recycled with other mixed recycling.

The recycling methods used for the Square Mile Challenge will process the cups to create either a plastic or recovered fibre material which is made into new products, some of which will be donated to a new outdoor community space and cafe opening in the City next year.

“We are delighted that so many organisations, including the local authority, Network Rail and businesses that are usually in competition with each other, are collaborating to tackle this issue.  We hope that other parts of the UK will follow suit and eventually reach a point where recycling levels for coffee cups are on a par with those for drinks cans and bottles.

“It would be easy to suggest that everyone should use reusable cups for our hot drinks, but the reality is that disposable cups are being used in their millions and so we have to deliver a solution to this issue.

Alongside their participation in the development of recycling solutions, it’s great to see that many retailers are also now providing discounts for customers using reusable cups and are investigating finding long-term solutions to ensure cups can be more widely recycled in the UK”.

“Until now there has been no consistent, reliable way to recycle coffee cups in the heart of London and so the Square Mile Challenge is a big step forward.  We’re committed to making London cleaner, reducing waste and boosting recycling.  I hope this scheme is a success and will encourage local authorities and businesses to start recycling coffee cups across the capital.”

“It’s great to see the range of businesses that have signed up so far to the Challenge and we look forward to seeing more joining throughout the campaign.  The City Corporation is committed to maintaining London’s position as the leading financial and professional services centre in the world and strengthening our competitiveness on the global stage.

A big part of this is ensuring that we manage our waste both sustainably and responsibly.  We spend £3.8million a year cleaning the City’s streets and more than 400,000 people commute and into the City of London every day.

“We urge the people who live, work or visit the Square Mile to be conscious of where they throw away their coffee cups and keep an eye out for the recycling points across the City.”

People working or living in the city are encouraged to view the Square Mile Challenge map to locate their nearest recycling point and look out for yellow stickers in the windows of participating organisations.

This initiative has been made possible with the support of coffee retailers: Caffè Nero, Costa, Marks & Spencer, McDonald’s, Nestlé, Pret A Manger, Starbucks, Bunzl Catering Supplies and coffee cup manufacturers: Benders Paper Cups, Dart Products Europe, Huhtamaki and SEDA International Packaging Group.  It follows the launch of the Paper Cup Manifesto in June 2016, which garnered over 40 signatories from companies involved in the coffee industry, committing to improve recovery and increase recycling of paper cups.