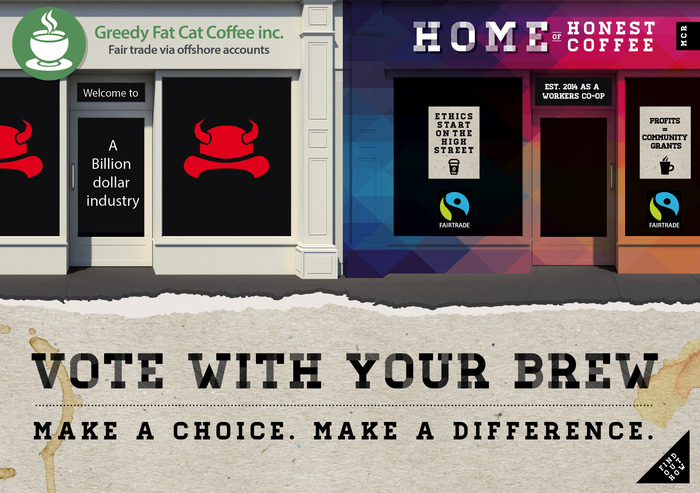 MANCHESTER – It’s a novel approach and a noble one, to say the least. Mark Ashmore and his organization, Future Artists, are looking to compete with the well-known, high-priced coffee retailers of the world.

But instead of trying to out-market and outsell them, he wants to provide a cafe that not only serves hot beverages – but gives something back to the community. And he wants this to happen right in the center of Manchester, UK.

“We think we can build a new type of coffee shop franchise,” says Ashmore. “It would be an amazing space that looks great, sells fair trade goods and runs as a co-op. The shop would provide a fair deal for the workers, our suppliers, and our customers. We will share the profits with those who use the space.”

Welcome to The Home of Honest Coffee, a prospective community space that functions in a multitude of ways. It’s a coffee shop, a workspace and source of grants for individuals and small businesses.

The plan is for the venue to produce enough revenue so that it can provide 100,000 pounds in grants annually.

“This would enable exploration of the arts and sciences, benefiting health and well being,” Ashmore says. “It would also be a place to meet, share and create.”

Members of the co-op would decide how the funds are to be divvied up. In addition, The Home of Honest Coffee would also offer workspace for up-and-coming artists, entrepreneurs and freelancers – with no obligation to purchase any food or drink.

For 5p a minute, the co-op would provide a full-sized desk, electricity, free Wifi and complimentary refreshments. There would be no limit on time spent in the café.

It’s truly a coffee shop of the people, by the people and for the people. Thus the source of funding for this project is one and the same: the people. Future Artists has launched a Kickstarter campaign to raise the necessary start-up capital.

The Kickstarter page can be accessed at www.kickstarter.com/projects/futureartists/the-home-of-honest-coffee-manchester.

Depending on their donation levels, backers can pre-purchase cups of coffee, become members of the co-op or receive an invite to the opening night party.

Future Artists, which bills itself as “an old-school co-op with ethical values,” has been presenting free workshops and events for the past three years. Now the organization is working on its biggest project by far, a totally new concept in community venues.

The incentive to support this kind of venture is rather obvious. “The more coffee you buy from us, the more community grants we can give out,” says Ashmore.

For further information about The Home of Honest Coffee, visit www.kickstarter.com/projects/futureartists/the-home-of-honest-coffee-manchester or the Future Artists website, www.futureartists.co.uk.