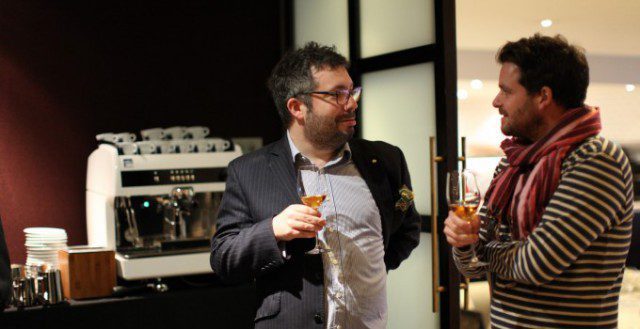 Last week the Slow Food Chef Alliance, in partnership with its sponsor Lavazza, hosted a special lunch at Sartoria Restaurant in London with 12 prominent chefs from around the UK.

The meal was completed with a special dessert carefully created by Pfaff with Lavazza’s special KAFA blend.
Providing the perfect setting to plan the continued championing of Slow Food UK’s valuable work into 2015, its Slow Cheese campaign was discussed following recent consumer and media debate around raw milk.

The Slow Fish campaign was also a key focus, currently supported by Lukas Pfaff who is proactively raising funds via a special Slow Fish sharing dish available at his restaurant throughout November, using wild and sustainably caught and local fish.

In addition, the Slow Meat campaign that is due to kick off in the UK in 2015 was high on the agenda. This project will encourage the eating of less but better quality meat, as well as drive awareness of increased animal welfare through small-scale production.

“Since joining Slow Food UK’s Chef Alliance back in 2013, I’m really proud to be part of such an important global movement, both delighted and honoured to host the Chef’s Alliance lunch at Sartoria. It was great to see so many British based chefs actively supporting this vital cause to promote good quality and sustainably produced food.’’

“It was good to see so many members participating in the Chef Alliance lunch: chefs nowadays have huge media exposure and, with it, a great responsibility to endorse movements such as Slow Food, who champion good, sustainable and local products. We should all be promoting projects like the Ark of Taste and supporting campaigns such as Slow Meat and Slow Fish. It is all about knowing where your food comes from, its heritage and history, because ultimately, we are what we eat.”

La Marzocco in the spotlight at Intergastra with Modbar and the new Sw...