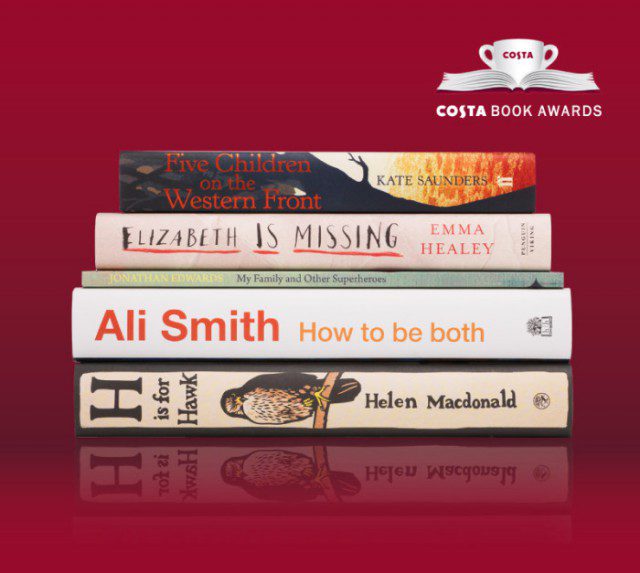 Originally established in 1971 by Whitbread Plc, Costa announced its takeover of the sponsorship of the UK’s most prestigious book prize in 2006. 2014 marks the 43rd year of the Book Awards.

The five winning authors who will now compete for the 2014 Costa Book of the Year are:

Ali Smith, who triumphs in the Costa Novel Award category for the second time for her sixth novel, How to be both. She first won the Novel Award in 2005 for The Accidental

29-year-old debut writer Emma Healey, who collects the Costa First Novel Award for Elizabeth is Missing – a story narrated by Maud, an octogenarian whose progressive dementia is complicating her ability to solve a mystery from the past

Helen Macdonald, who takes the Costa Biography Award for H is for Hawk. Part memoir, part nature book, it is her personal account of training a goshawk as a way of dealing with grief following her father’s death

Welsh poet, teacher Jonathan Edwards, who scoops the Costa Poetry Award for his ‘joyous and brilliant’debut collection My Family and Other Superheroes

Author and journalist Kate Saunders, who wins the Costa Children’s Book Award for Five Children on the Western Front. Called ‘a modern masterpiece’ by the judges, it’s a moving sequel to E Nesbit’s Five Children and It, and transplants the main characters into the trenches of World War I.

“What a fantastic collection of books,” said Christopher Rogers, Managing Director of Costa. “The Costa Book Awards are all about recognising great writing and a good read and this year’s winners are, as always, superb examples of this.”

The five Costa Book Award winners, each of whom will receive £5,000, were selected from 640 entries, and the books are now eligible for the ultimate prize – the 2014 Costa Book of the Year.

The winner, selected by a panel of judges chaired by Robert Harris, and comprising authors and category judges Maggie O’Farrell, Bernardine Evaristo, Jonathan Stroud, Owen Sheers and Wendy Moore, joined by Dame Diana Rigg, Robert Peston and Samantha Bond, will be announced at an awards ceremony hosted by presenter and broadcaster Penny Smith at Quaglino’s in central London on Tuesday 27th January 2015.

The 2013 Costa Book of the Year was The Shock of the Fall by debut novelist Nathan Filer.

The winner of the Costa Short Story Award – voted for by the general public and now in its third year – will also be announced at the awards ceremony. Voting is open until Friday 16th January until which time the identity of the authors remains anonymous.

Culture To Be Fixed

Culture To Be Fixed

“Scent of a Dream” – A journey in the world of coffee