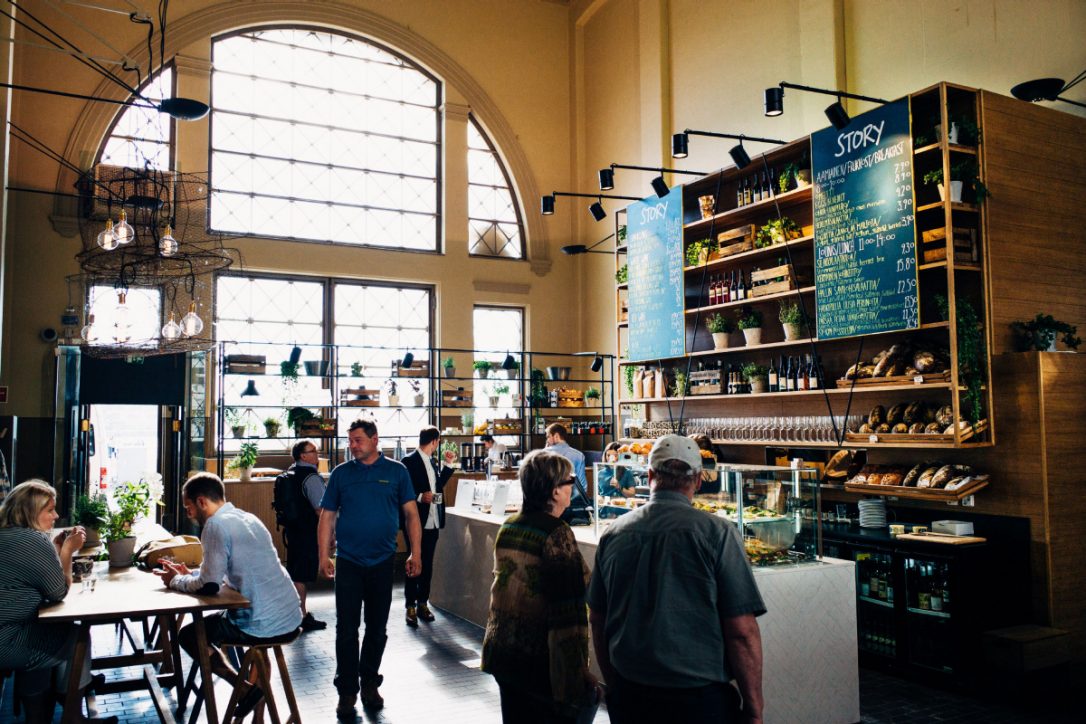 HELSINKI, Finland – In Helsinki’s 60-year old Café Succès, I watched a couple old Finnish women chatting over coffee and pastries by the window. Beside them, an anxious businessman checked his phone as he sipped an espresso.

This cross section of café customers is no surprise, because in Finland, everyone drinks coffee.

All the time. In fact, the country drinks more cups of coffee per person, per day (2.6) than anywhere else on Earth.

Each citizen consumes an estimated 12 kilograms of coffee annually, over double the amount of the average Italian. Many typical Finnish adults say they average 6 to 8 cups daily.

I spent a few days café-hopping through Helsinki, exploring Finnish coffee culture, to find out why they drink so much, how the experience differs from that in the United States, and to see if anyone ever gets any sleep.

Opened in 1891, Fazer impresses with its art deco design, two large dining areas, and stacks of confections and pastries for sale. The café recalls prewar Finnish coffee culture, appropriated from central European sophisticates who gathered in cafés to discuss the latest news, culture, and politics.

Fazer still has a regular clientele of local businesspeople, families, and what looked like a women’s reading group on my Tuesday morning visit. Helsinki features a dozen other classic cafés, including Café Regatta, a little wooden ski shack in an urban park, and Café Ekberg (established 1852), with ornate mirrors and thick yellow curtains that make it seem like you’re visiting your grandma’s living room.

A visit to your grandma’s (or neighbor’s) living room for a coffee was the heart of Finnish coffee culture in the 1950s. In those tight postwar years, coffee was a symbol of well-being and hospitality. Finns even have an expression “kohteliaisuuskahvi,” meaning “a politeness coffee,” referring to the obligation they have to always offer, and drink, a cup of coffee in a welcoming setting.

Like the British with their tea, Finns began to treat coffee as an essential part of their daily life, not only as a warm caffeine injection during dark, gloomy winters, but as a habit of greeting and meeting protocol, always presented in proper cups and plates with a sweet snack.

During the birth of Finland’s coffee culture, the specific beans, roasts, and styles weren’t as important as the ritual of sharing a cup and the basic qualities of coffee being warm and keeping you alert. “It was all about quantity, not quality in those days,” Alan Grosvenor, the Seattle transplant leading operations at Helsinki’s Kaffa Roastery told me. “Think gas station coffee,” he added, with a sour expression.

In the past six or seven years, Finland has seen a dramatic change in its coffee culture. There are more fancy drinks, a variety of local artisanal roasts, and a heretofore unseen habit of take-out coffee. “We saw it on American TV shows,” one Finn told me, “and thought that must be the cool way to do it.”

Rather than a place to grab a cup for fuel, or a spot to meet grandma, Finnish cafés are now becoming hangouts where younger people come to work and socialize. “We have sort of a scene here,” said Matthias Merikuuka, manager of Sävy in Kavila, the “hipster neighborhood” of Helsinki.

Twenty-somethings populated the stylish interior, working on laptops, chatting on high-design couches as 50s jazz played from vinyl on a turntable. “A lot of different types of people here, almost a little bit of Berlin feel is coming,” he added.

Julia Reinhard, a New York expat managing Kavila’s Good Life Café agrees that the Finnish café scene is converging with the global one. “We roast our own beans, do a lot more lattes and cappuccinos nowadays. And it’s almost like an international living room here,” she said, as I heard conversations in multiple languages around me.

But the Finnish feel remains pervasive, with traditional local light roasts and filter coffee dominating the market. No more so than the chain of Mumin Cafes (based on the classic Finnish children’s book characters), with cobranded local bean blends, and kids play areas to occupy the little ones while adults caffeinate to keep up.

Perhaps the most unique part of Finnish coffee culture? Despite the huge demand for the product, there are still only two Starbucks in all of Helsinki.