The Nordic World of Coffee ends on a high 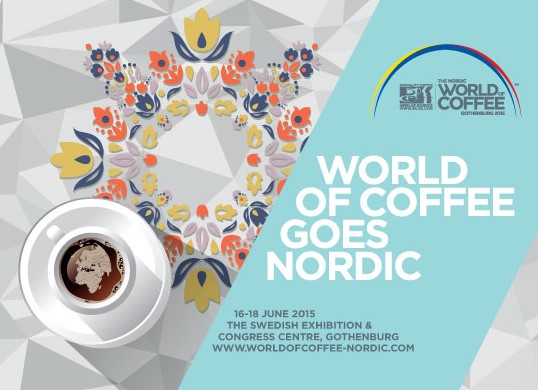 Five new World Champions were crowned, thousands of coffee professionals were educated and inspired, more than 4,000 visitors met with 1,000 exhibitors, and one new World Champion got engaged when the Nordic World of Coffee arrived in Gothenburg last week.

While Europe was cheering when three new World Champions were announced, including two for the Nordic region, 2015 World Latte Art Champion, Caleb Cha, from Australia, had an even bigger reason to celebrate when he dropped on one knee and proposed to his girlfriend on stage. (She said yes!)

Joining Caleb in the Winners’ Enclosure at World of Coffee were:

Leaders in the SCAE Community were also celebrated at the event, when the SCAE Excellence Awards were announced on Wednesday, 17 June.

Proudly sponsored by Demus S.P.A., the Awards are judged by the SCAE International Development Committee and honour members of the coffee community who have contributed to the success of the industry through education, innovation, sustainability and entrepreneurship. This year’s winners are:

New Product of the Show Awards

The New Product of the Show Awards, sponsored by Wilfa, were announced on Tuesday, 16 June and recognised the most exciting new innovations to enter the market over the last 12 months. The winners were:

World of Coffee in Numbers

The Nordic World of Coffee attracted 4,073 unique visitors from 81 countries, over 50% of whom returned on days two and three of the show, where they met with more than 1,000 exhibitors on 155 stands in the 3,000sq.m. exhibition.

All eyes are now on Dublin when World of Coffee moves to the Irish capital in 2016, where it will also host the World Barista Championship and the World Brewers Cup. Bookings for World of Coffee Dublin opened in Gothenburg and over the three days of the show two-thirds (66%) of the available stand space for 2016 were booked.

David Veal, Executive Director of the Speciality Coffee Association of Europe, is delighted with the response to the event. ‘The Nordic World of Coffee was a huge success for SCAE and I have been overwhelmed with all the positive feedback we received over the three days here in Gothenburg.

From the inaugural Re:co Speciality Coffee Symposium on the eve of the show, to the exciting competitions, inspirational seminars and talks, and the thriving exhibition brimming with ideas and innovations, World of Coffee proved once again that it is Europe’s greatest coffee event.

We are looking forward now to Dublin in 2016 and our local working group in Ireland, led by SCAE’s new President, Paul Stack, are already at an advance stage of planning.

I would like to sincerely thank the working group here in Gothenburg who have worked so hard to make the Nordic World of Coffee the best ever, and I am particularly thankful also to our sponsors BWT water+more, Indonesia Specialty Coffee, Demus S.P.A., Wilfa and KeepCup, whose support has enabled us to stage such a great event.’