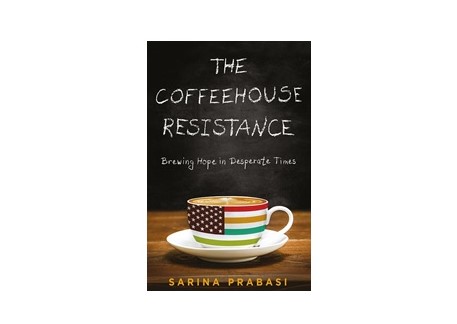 NEW YORK, U.S. — Greenwriter’s Press announced today that it will be releasing a powerful new memoir this Spring, written by immigrant, coffeehouse owner and nonprofit leader Sarina Prabasi, The Coffeehouse Resistance: Brewing Hope in Desperate Times chronicles her family’s journey from Addis Ababa to New York City, where they start and grow a thriving coffee business.

After the 2016 election, they are suddenly unsure about their new home. Part coming-to-America story, part lyrical memoir, and another part activist’s call to action, Greenwriter’s Press describes The Coffeehouse Resistance as ‘timely, funny and poignant.”

Written in short, extremely readable vignettes, the book starts with Prabasi’s globe-trotting childhood, and weaves between Addis Ababa and New York. As their business finds roots in their local community in Upper Manhattan, Prabasi tries to reclaim the history of coffeehouses as places where people come together, where ideas are debated and where neighbors organize their communities. Ultimately this is a hopeful book and powerful call to action to reclaim the America Dream. The book will be out on April 9, 2019.

“Prabasi draws on the hard-won wisdom of a mother, entrepreneur, and global executive to deliver a compelling account of the deep and nuanced experiences that make up the American Dream,” said Greenwriter’s Press.

Pulitzer Prize-winning playwright and composer, Quiara Alegria Hudes has described the book as “… soaring with political and personal ferocity…”

The Coffeehouse Resistance retails for $19.95 and is currently available for pre-order at local bookstores or on Amazon, Indie Bound, Books-A-Million or Barnes & Noble.