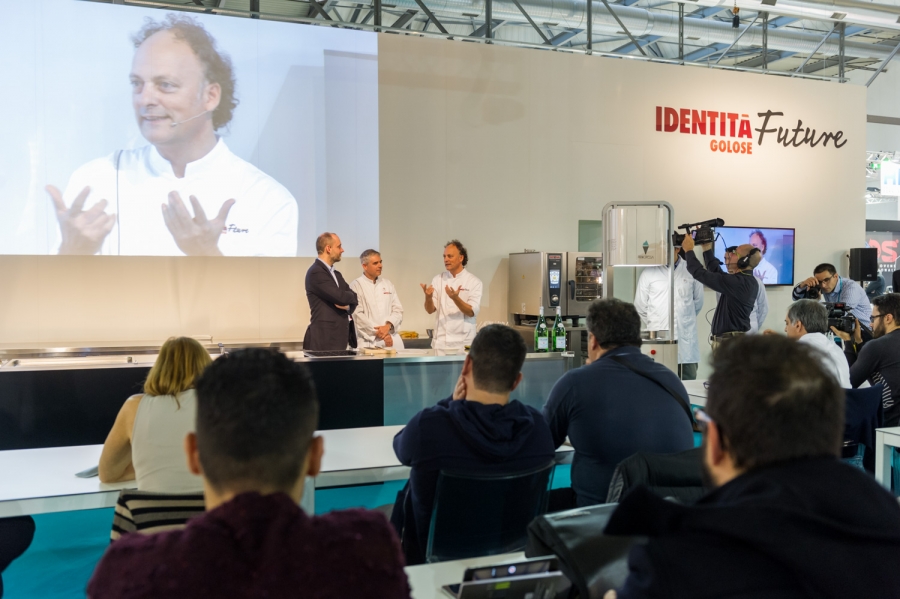 MILAN- Everything to do with the kitchen: from new products developed by exhibitors to the latest innovations in food equipment, from the most recent food processing and preservation techniques to an in-depth look at the culture of food.

HostMilano 2017 will be back at fieramilano October 20 through 24 for everyone who wants to learn more about the catering industry of the future, from young people just setting out in the industry to professionals in search of the latest new developments and new sources of inspiration.

With b2b events, meetings with today’s top chefs and updates on a continually changing world, the Catering area, along with the Bread, Pasta and Pizza area, promises to be the liveliest part of the Milanese trade fair once again.

A place to go for updates, an essential landmark in an industry which has not suffered from economic crisis, either in Italy or abroad.

Italians eat out more and more often, with dining out now accounting for over one-third of families’ food expenditure, about 35%, equal to € 75 billion. The figures emerging from a study entitled “Catering, luxury and territory: Drivers of the Italian way of living” (promoted by HostMilano and conducted by Magda Antonioli Corigliano, head of the Master’s Programme in the Economics of Tourism at Bocconi University, with Met Bocconi researcher Sara Bricchi) indicate that the industry has started growing again in the past three years, with more than 325 enterprises in operation in the sector (according to Fipe figures for 2016).

Italy has more catering enterprises per square kilometre than any other country in the world; more than half of these (53.1%) are restaurants, though the category also includes mobile catering enterprises, such as food trucks. According to the Fipe 2016 Catering Report, 39 million Italians ate out in 2016.

The news is good in Italy’s food production industry too. The latest ANIMA-Assofoodtec figures state that the industry was worth €4.92 million in 2016 (66% of which was represented by exports, worth €3.26 billion); the forecast for 2017 indicates a positive trend, with a value of €5.1 billion and growth in both production (+3.8%) and exports (+3.6%).

Speaking of exports, the year 2017 also exceeded expectations in the USA, one of the three target areas that are the focus of this edition of HostMilano, according to the National Restaurant Association. Sales were up over the previous year in the industry as a whole, to $798.7 billion (+4.3%), with 3.5% growth in the tableservice-restaurant segment, where sales totalled $263 billion.

In addition to a well-established business platform, HostMilano 2017 will be a true observatory where the whole world can discover the latest trends in new generation catering. In restaurants, pizzerias, bars, delis, fast food outlets, cafeterias and all other food-related businesses, technological innovation and knowledge of new catering models have become essential assets.

This is even truer in an age such as our own, in which globalisation has affected individual gastronomic traditions, bringing changes throughout the catering industry and forcing professionals in the industry to address unprecedented challenges.

After all, as revealed by the Bocconi study for HostMilano 2017, the very meaning of food has changed: from its primary function of nourishing, everything that is food now plays an increasingly important role in social identification.

Styles and choices such as health trends, vegetarianism, and food fads have an impact on “what” we eat and “how” we eat it , though nobody wants to give up the dishes we associate with enjoyment and conviviality.

People are increasingly using advanced technologies when they eat out: going onto the Internet or social media to read locals’ reviews when deciding on a restaurant, or using smartphones and new electronic payment methods.

Not to mention the fact that new food equipment technologies in the kitchen are permitting creation of recipes that were once unthinkable, thanks to new hi-tech ways of treating, preserving and cooking ingredients.

And that’s not all: the decision “what” to eat and “how” to eat it is a part of our culture, and Italian cooking is a true ambassador of the Italian way of living. With the result that these properties make quality dining the ideal international showcase for Italian industry: from farming and food production to furniture and machinery for preserving ingredients and making them into food and wine.

The restaurant of the future, in hundreds of events

Always an essential appointment for anyone working in the catering industry, HostMilano looks at all the latest developments over the past two years with a packed calendar of events in 2017.

The focus will be on the most talented young people coming out of the country’s vocational schools, selected in a lengthy process which concluded in April in the “A BIT of Taste” area at Bit Borsa Internazionale del Turismo.

Another organisation that will be represented is the National #APCI Chef Italia Team, with five days of cooking shows featuring famous chefs and celebrity guests, tastings and debates. In collaboration with Lavoro & Turismo, interviews will be held with professionals in search of new career opportunities, who will be able to make themselves known and get to know key players in today’s restaurant and hotel industry.

Machinery and items used in kitchens and workshops will take centre stage at Identità Future, HostMilano’s area created by Identità Golose. “The goal is to underline what new things technology can allow us to do, that were very complicated if not impossible before,” notes Paolo Marchi, the man behind the Identità Golose initiative.

Cooks from the Chic – Charming Italian Chef – association will be advocates of sustainable cookingwith the utmost respect for our health and the environment for the first time at HostMilano with the ChicRespect brand. All the various production phases within the green approach to the premium catering sector will be analysed, with a focus on waste reduction and ethical consumption.

The Bread Pizza Pasta area will host the European Pizza Championships, organised by Pizza e Pasta Italiana magazine, with the involvement of more than 60 pizza-makers from all over Europe, taking a closer look at the traditional pizza of Naples and the health benefits of one of the world’s most popular Italian foods.

The Pane Pizza Pasta area will also see the return of Pillole di Primo Piatto, a series of free monothematic seminars on the various aspects of the professional pasta industry, organised by A.P.Pa.Fre.(Fresh Pasta Producers’ Association for Small and Medium Businesses) in collaboration with the PRIMO PIATTO pasta-making school. The third edition, “Il pastaio 4.0”, will focus on the latest new techniques and technologies.

AIC Lombardia Onlus (the Italian Celiacs’ Association)will be presenting an app for the increasingly relevant gluten-free segment, designed to help celiacs dine out, as well as cooking shows and gluten-free food tastings at a stand in collaboration with the Associazione Cuochi di Milano e Provincia (Milan and Province Cooks’ Association). In this area, Master Chef Giovanni Priolo will host a series of initiatives sharing a single common thread: the wealth offered by traditional Italian cuisine, old-fashioned ingredients and traditional grains.

A packed calendar of free events, updates on the latest technical and regulatory developments and an in-depth look at market trends will be available at ANIMA, an oasis of advanced Italian food technologies where visitors can obtain information from the professionals of the association representing producers of food technologies.

Lastly, the partnership between HostMilano and Fcsi, Foodservice Consultants Society International, continues with “A glimpse of the catering industry of the future”, where professionals can learn how to meet the demands of ever-changing consumers in search of new experiences and social events.