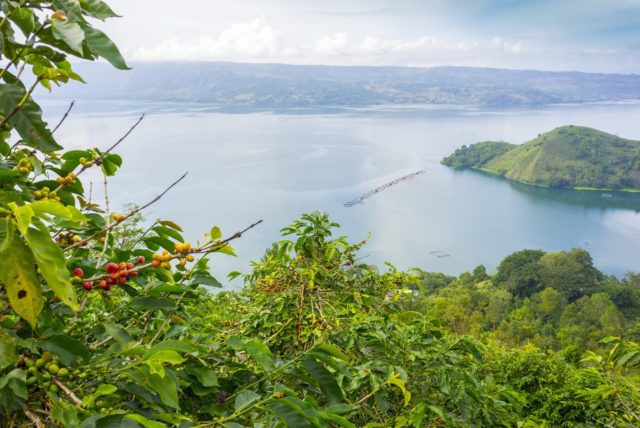 NORTH SUMATRA, Indonesia – Located near to the famous Toba Lake (PICTURE) in Muara sub-district, North Tapanuli district, North Sumatra, Hutaginjang village is the site of the annual Starbucks Original Experience 2017, in which some of the coffee chain’s employees visit a village to gain knowledge about coffee and interact with the locals, especially coffee farmers.

Thirty-five coffee farmers and 100 Starbucks employees from 50 countries in the Asia-Pacific region took part in the programme, according to kompas.com.

Starting from March 14 to 21, they transplanted 1,000 coffee seeds to polybags, seeded them together with lamtoro as the shade trees (pohon pelindung) and finished the construction of a compost house.

According to the 2016 Coffee Outlook publication from the Agriculture Ministry’s secretariat general, North Sumatra is known as the largest producer of Arabica coffee in Indonesia with an average annual production of more than 49,000 tons between 2012 and 2016.

Meanwhile, in 2014, North Tapanuli district was noted as the district that was home to the largest Arabica coffee producer in North Sumatra.

The area around Toba Lake is volcanic terrain that is rich with minerals and nutrients. This is one of the factors that determines the taste and aroma of the coffee beans, aside from how they are planted and processed after harvest.

Furthermore, according to a 2015 study from conservation institution Conservation International (CI), who has partnered up with Starbucks Coffee Company, the area around the Toba Lake will be suitable for Arabica coffee up to the year 2050.

“They pick the red coffee seeds and grind them for eight hours after being harvested. This causes the coffee to have a balanced flavor and aroma.”

This is not the first time that Hutaginjang Village has been selected as the location for the Starbucks Original Experience. In 2016, they visited the village on March 22 and 29.

The village has been chosen due to its proximity to the processing plant of PT. Sumatra Specialty Coffee or the coffee chain’s green bean supplier. The company also collaborates with CI to purchase coffee beans from CI’s target farmers.