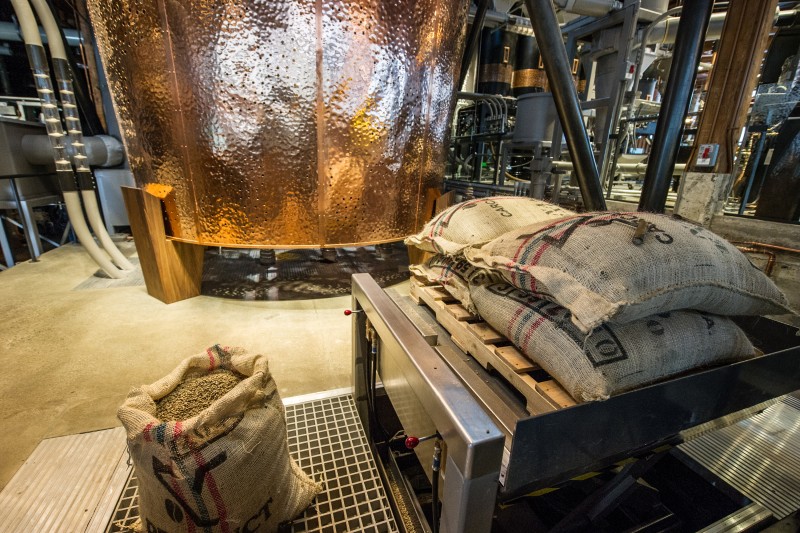 As the first anniversary of the opening of the Starbucks Reserve Roastery and Tasting Room approaches, the historic building has been awarded a new honor – LEED Platinum certification. The designation from the U.S. Green Building Council (USGBC) is its highest level of certification for environmental design and construction in the areas of energy, water, waste, materials, indoor environmental quality and innovation.

When the Roastery opened its doors for the first time on December 5, 2014, it was heralded as an immersive coffee experience unlike any other.

The 15,000 square-foot space featured both coffee roasting facilities and a café, bringing customers on the coffee journey. Just nine blocks from the first Starbucks® store, the opening of the Roastery also brought a historic building back to life and was recognized for its achievement in its restoration.

“The Starbucks Reserve Roastery and Tasting Room is a beautiful marriage of design and efficiency that takes into consideration both a retail and manufacturing environment,” said Liz Muller, vice president of Starbucks Creative & Design, who led the design of the Roastery.

Restoring a landmark building like the Roastery to such a high environmental standard would have seemed nearly impossible a decade ago, when Starbucks opened its first LEED® (Leadership in Energy and Environmental Design) certified store in 2005 in a modest shopping complex in Hillsboro, Oregon.

Then, the environmental building movement was still in its infancy with only two percent of non-residential construction projects built to LEED standards.

But Starbucks green building journey actually began years earlier in 2001, when they joined the USGBC and later helped develop the LEED® for Retail program, an effort to adapt the standards to new construction and commercial interior strategies for retail businesses.

Starbucks later became one of the first retailers to join USGBC’s LEED volume certification pilot program, providing a practical certification option for retailers of all sizes to implement LEED at scale.

“Starbucks has been one of our very earliest retail partners,” said Scot Horst, Chief Product Officer for the USGBC. “Starbucks really helped form the entire platform for LEED for Retail, and has been important to the evolution of green building around the world.”
Reaching to 1,200 LEED Certified Stores

With a store footprint spanning the globe, Starbucks success also became an opportunity to influence the retail sector. In 2007, Starbucks committed to designing and building its new company-operated stores to the LEED® standard, integrating green-building into its design process from the very beginning.

Building on early lessons from Hillsboro, Starbucks successfully achieved certification for its headquarters in Seattle and its roasting facilities in Carson Valley, Nevada; Sandy Run, South Carolina; and Augusta, Georgia.

In addition to addressing a large portfolio of new stores, the company’s design team also challenged themselves to think differently about green building, with innovative stores made from repurposed shipping containers and indoor-outdoor spaces.

Today, utilizing the talents of 300 LEED-accredited designers in its 18 in-house design studios around the world, Starbucks has more than 700 LEED certified stores in 19 countries.

That’s more than any other company in the world and Starbucks has committed to nearly double the number in 2016 with a total of 1,200 LEED certified stores.

“Our job as designers is to create spaces that reflect the communities we serve while anticipating its future needs so that we are designing for the longevity of the neighborhood as well as our business,” said Bill Sleeth, vice president, Store Design.

“Our responsibility is to do this in a way that integrates environmental sensitivity and local resources, so that we are also using our scale for good.”