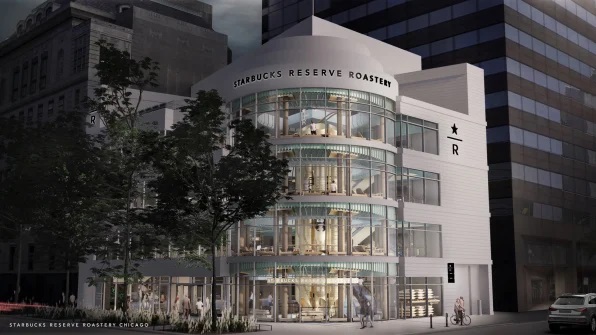 CHICAGO, Il., U.S. – The Starbucks Reserve Roastery, which opens its doors to the public today in the Windy City, marks the coffee giant’s sixth global Roastery an third one of its kind in the U.S. The chain originally announced the opening of the “Reserve Roastery” back in 2017 in a press release, mapping out its location on North Michigan Avenue and Erie Street on the Magnificent Mile.

The five-story building is the former Crate Barrel flagship store that closed last year and is the first Starbucks Roastery to be 100 percent wind-powered.

The Roastery employs nearly 200 people, many recruited from Starbucks locations across the country.

Starbucks largest-ever immersive coffee experience – across five floors and 35,000 square feet of retail space – celebrates the company’s heritage and is a tribute to the roasting and the craft of coffee.

Visitors will be able to see, hear and learn about coffee’s extraordinary journey through intentional and unparalleled design while enjoying a menu featuring unique beverages exclusive to this location.

Starbucks Roasteries only serve coffees that are roasted on-site, and this location is predicted to roast 200,000 pounds of beans per year.

“This roastery is a representation of the relationship that Starbucks has had with the city of Chicago,” Starbucks CEO Kevin Johnson said in a statement. “Chicago has been a market where we innovate and try new things.”

“For us, this is really a dream. The building history here is very unique,” Johnson added.

The Roastery dedicates a “love letter” to Chicago on the fourth floor.

“Chicago, you inspire us. Your people, your city, your architecture, your music, your art. Your neighborhoods and communities,” the wall art reads. “Thank you.”

Indian millennials relate to coffee as a companion, says a survey by L...