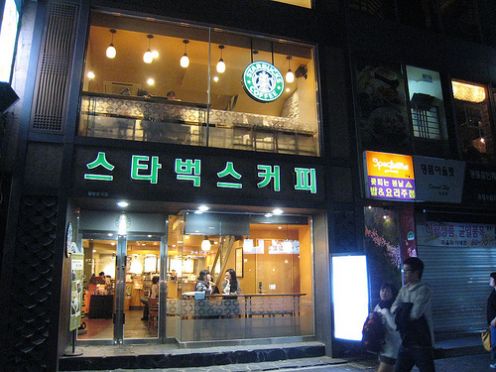 A Twosome Place, an affiliate of CJ Group, had 894 shops as of the end of September, up from 798 at the end of last year. Its main competitor Angel-in-us, which belongs to Lotte Group, had 810 shops, down from 843.

Starbucks remains the undisputed No. 1 in the industry, becoming the first coffee shop franchise in the country to surpass 1 trillion won (US$882.92 million) in sales. It had 1,080 branches across the country as of end of August.

Local brand Ediya has the greatest number of shops at 2,000, but its business is based mostly on small shops with low-cost selections. Its sales last year stood at a modest 153.5 billion won, leaving the most competitive race to A Twosome Place and Angel-in-us.

“Angel-in-us at one time had threatened the market leaders, supported by the capital and marketing strength of Lotte,” an industry official said. “But its downturn is becoming clearer. Unless there is some dramatic change, the trend will continue.”