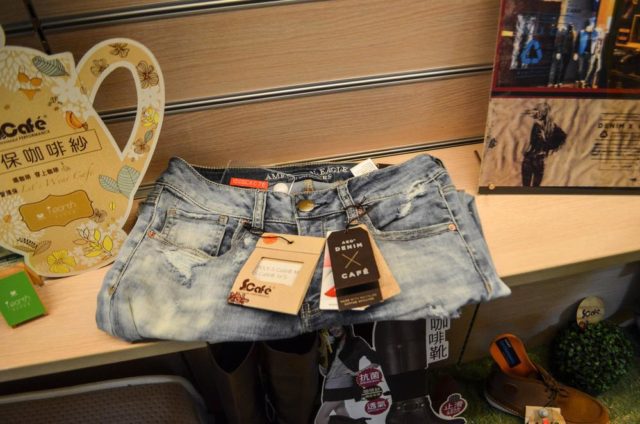 TAIPEI – Consider your morning cup of joe. To produce it, only 0.2 percent of the coffee bean was used. The remaining 99.8 percent became coffee grounds and was most likely thrown away, never to be seen again.

For the last decade, Taiwanese company Singtex has made a fortune from those grounds, creating fabric out of coffee waste.

The idea came up in 2005, when Singtex CEO and third-generation textile maker Jason Chen and his wife Amy were sitting in Starbucks. Sipping coffee, Amy noticed a group of old ladies collecting leftover coffee grounds from the counter.

“Hey, honey, it’s a good idea for you,” Amy joked. “Coffee grounds can take away the body odors.”

Jason took the suggestion to heart. Shortly after that conversation, he launched the brand S.Cafe, pouring in four years of research and $1.7 million of investment money. S.Cafe became the world’s first mill that converts leftover coffee grounds to fabric. Today, is has more than 110 clients, including Patagonia, North Face, Timberland, REI, Adidas, American Eagle, and Victoria’s Secret.

American Eagle used the ground-up java fiber to make jeans. Timberland used it in its shoe fabric, which helps with stinky feet.

“Coffee grounds [eliminate] odors, and [are] combined with polyester from recycled plastic bottles to make fabric,” Singtex marketing representative Mosa Wong says. “It also dries fast.” Additionally, coffee can protect pigments and fibers from ultraviolet rays, and it is great for waterproofing.

Here’s the process in a nutshell: Polyester is manufactured with recycled PET bottles. Roasted coffee grounds are mixed in with the polyester to create coffee yarn. Coffee-laced yarn is used to make fabric. Fabric is used to make clothes.

One T-shirt can be made with three cups of coffee grounds and five recycled plastic bottles.

The coffee is sourced, entirely free, from cafes and stores in Taiwan, such as Starbucks and 7-Eleven.

“Our employees will pick up the grounds on their way to work,” Wong says. “We reduce our carbon footprint this way.” She says that on a given day, an average of 500 kilograms of coffee grounds are picked up and used. It’s a small fraction of what Taiwan actually produces in coffee waste.

On the island alone, 30 tons of coffee grounds are produced every day from 6 million cups of joe.

Oil is extracted from the leftover bean and is sold to cosmetic and soap companies. It is also utilized to make waterproof film and foam pads.

Over the years, Singtex has become a model of sustainability in Taiwan. The company has a strict recycling system, uses natural gas instead of coal, and the cafeteria goes vegetarian once a week. According to Wong, the shift to eco-friendly initiatives really came about in 2009 when Chen attended a speech hosted by Patagonia.

“He heard the speech and was inspired by Patagonia to make Singtex into a more environmentally conscious place,” she says.

While S.Cafe only accounts for 10 percent of Singtex’s business, the technology has had an enormous influence over the textile industry. The coffee-laced fabric provides an alternative to cotton, a water-intensive crop. A single shirt of cotton requires 2,700 liters of water. Coffee grounds are free, and recycled plastic bottles have smaller carbon footprints than their non-recycled counterparts.

Mainly, however, the coffee-to-fabric concept is a business model that people around the world can replicate and potentially use as a source of extra income.

This has been done already in Columbia.

When the Colombian Federation of Coffee Farmers heard about S.Cafe, they invited Chen to help them create textiles using 100-percent Colombian coffee. The team partnered with Café Buendía in Colombia, which was incinerating up to 25 tons of coffee grounds a day. With Chen’s help, they were able to extract coffee oil and use the solids to create textiles. The clothes were then sold to the local market by the coffee shops owned by the coffee farmers.

“Whereas no farmer can ever dream of getting more than a thousand dollars per ton of coffee, its waste can now be converted into an input for fabric,” Gunter Pauli wrote in a case study about Singtex. Pauli is the author of The Blue Economy, a book on sustainable businesses around the globe.

And Singtex doesn’t seem to be stopping anytime soon. The company is constantly looking for different ways to use coffee grounds. In 2014, it launched Sepia, a textile line that combines wood pulp and coffee grounds to make biodegradable cloth.

“Yes, our coffee fabric is more expensive than regular [textiles],” Wang says. “But we’ve found that as the years go by, more people want eco-friendly products.”

Julius Meinl and Worldreader fight illiteracy one poem at a time this ...

Baristas share the weirdest situations they have ever seen in their co...