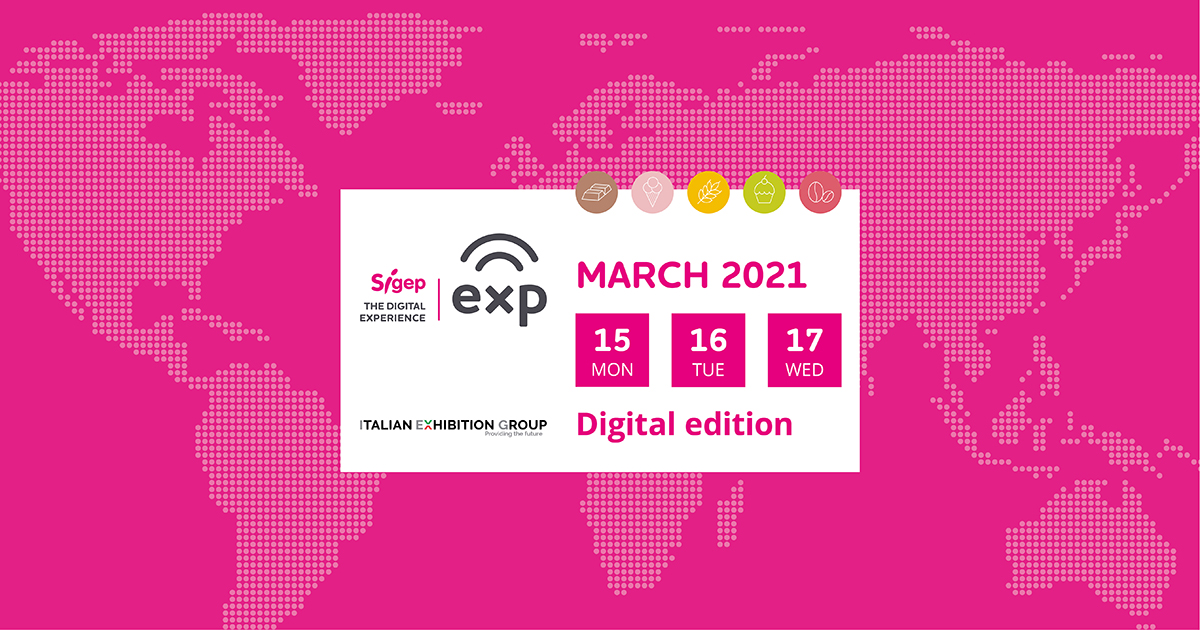 RIMINI, Italy – Sigep Exp – The Digital Experience with over 200 events organized by IEG and exhibitors in the Vision Plaza and the Sigep Lab wrapped up on Wednesday. While awaiting the live edition in January 2022 of SIGEP, this digital event enabled thousands of enterprises from the Italian and international out-of-home dessert and coffee food service world to digitally converge on the Sigep Exp platform to meet the community of professionals and companies of its four product chains.

Here is a round-up of the main events in the third day of the show.

Artisan gelato is the only food to which the European Parliament has dedicated an official day. In fact, March 24th is European Artisan Gelato Day. Sigep Exp dedicated a talk show to discovering the flavour of the year: Mantecado”, is a gelato with old-fashioned vanilla cream, streaked with orange sauce and decorated with dark chocolate chips. It is a flavour celebrating the gelato tradition of Spain, a country that is a crossroads of people and flavours. At the preparation of the gelato, by gelato maker Ciro Fraddanno, participants were vice president Domenico Del Monte, Silvia Chirico of Tenuta Chirico and biologist/nutritionist Marianna Rizzo, expert in food education and Mediterranean diet, who emphasized the health function of a food such as artisan gelato.

Out-of-home and digitalization: A winning combination for the entire food chain

Product and process traceability and transparency. Storytelling, communication and knowledge. Aspects common to the chains to optimize logistic effectiveness and provisioning processes. These are just some of the influence areas affected by the benefits of digitalization of the food chain and out-of-home trade. Also providing a response to the challenges caused by the pandemic.

A perspective outlined by Matteo Figura, Director, Foodservice Italy, NPD Group, Paolo Cibien, Foodservice Engagement Manager, GS1 Italy, and Virgilio Maretto, CEO and Co-founder, pOsti, on the second day of the program of Vision Plaza, the Sigep Exp format in streaming on Italian Exhibition Group’s digital platform. “Digitalization isn’t something new, but the change has been caused by the acceleration of the processes”, sums up Figura. “Foodservice players are exploring new possibilities of service for consumers that are pay increasing attention not only to product quality, but above all the consumption experience.”

Digitalization runs through the entire chain, from big data to business aspects, as Paolo Cibien stresses, “New directions must be taken in the b2b world: supply chain means improving the processes and here digitalization can do a lot for the provisioning and management of raw materials.”

A search for transparency and traceability that, bearing in mind the current scenario is expressed in the issues of safety and health for consumers that are increasingly aware and well informed “The blockchain”, states Virgilio Maretto “has been adopted from finance, but it is a concept that can be applied to all the supply chains in which there are exchanges between various parties, such as the food chain. We adopt a database that records unalterable guaranteed information, which then reaches consumers by means of storytelling that has the effect of a stimulus for informed purchasing, even in the case of delivery systems.”

After five years in Tokyo as pastry chef at the “BVLGARI Il Ristorante Luca Fantin”, Fabrizio Fiorani has returned to Italy to bring home his idea of contemporary pastry-making. Born in 1986 in Rome, Fiorani in an interview by Livia Chiriotti, managing editor of Pasticceria Internazionale, in the Sigep Exp Vision Plaza, outlined his idea of contemporary pastry-making with a reference to Oscar Wilde’s famous paradox: “Nothing is more necessary than superfluous. One doesn’t eat for hunger but for desire. It is therefore important to evoke an atmosphere round dishes”, says Fiorani, whose creations mix ingredients with ideas connected with the world of art, architecture and music.

“For me, avant-garde means looking beyond, putting technology at the service of taste, but without forgetting control and technique: the pastry chef’s head behind technological avant-garde is fundamental.” The pastry chef then gave a suggestion to youngsters wanting approach the pastry world: “Try, make mistakes and work in the kitchen rather than on social networks.”

From Pandemic to Pan Mania, how the perception of bread has changed

Long live bread, we have rediscovered it. If possible with a little extra virgin olive oil. The most classic Mediterranean breakfast there is. Perhaps a breakfast to be exported. A talk show that whetted one’s appetite, dedicated to the basic food and its companion, Extra virgin olive Oil from Assitol, today in the Sigep Exp Vision Plaza.

On the other hand, is the schiscetta has become the lunch box, reminds Palmino Poli, Vice President of the AIBI, then the opportunities of transformation for traditional products and sales channels are almost endless, and surprising if nothing else. For example, the local baker’s shop. AIBI president AIBI Giovanni Bizzarri says, “Bakeries are going digital, small shops make people feel safe because their entrances are controlled and they transmit trust over the counter.

But they must reorganize because smart working will remain a habit. So why not imagine that if it is possible to work in a coffee bar or in the park, work spaces can be provided in stores too? On the other hand, our neighbourhood stores have experimented and adapted to the new e-commerce channels.” Bread is also a symbol of solidarity, which travels on the digital channel and increases the supply even in times of lockdown and red zones. “We reacted well”, reminds Cesare Marinoni, historic Milan baker “also as far as solidarity between colleagues was concerned.

With the Pane in piazza group, with 500 bakers taking part all over Italy and exchanging products from different regions to vary the bread selection in bakeries.” The spotlight is now on export, comforted by a necessary optimism that is confirmed by the figures.

The importance of being a Raw Material. A topic that is often underestimated but, thanks to the newly founded “Alberto Pica” Accademia del Gelato Artigianale, is at the centre of a project to offer artisan gelato local suppliers of excellent raw materials.

This was noted by Claudio Pica, secretary general of the Associazione Italiana Gelatieri in the Vision Plaza, the format in live streaming to give a perspective to the professionals who are meeting at the digital edition of Sigep, being held by IEG from 15th to 17th March. “The gelato world is evolving thanks to the knowledge of raw materials and natural fibres. Nowadays, gelato makers are small chemists who put together the excellent materials to highlight Italy’s sweetness”, states Pica.

“Coldiretti outlines a growth process among producers on issues of sustainability and biodiversity to improve agriculture”, states Coldiretti Rieti President Alan Risolo. And the coordinator of the “Alberto Pica” Accademia, Aldo Pasquarella, describes the good practices for healthy gelato: “It is possible to obtain a gelato with low sugar and fat content, maintaining the quality of artisan gelato, by applying technical knowledge of the ingredients and appropriate use of technology: a few ingredients, efficient stock management, knowledge of the raw materials.”