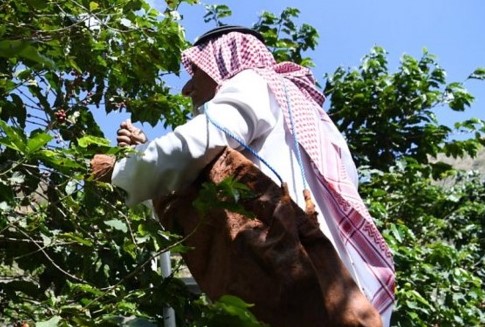 SÃO PAULO, Brazil – The coffee production in Saudi Arabia is expected to surpass 300 tons by the end of 2020 due to increased production in the Jazan region in the Southwest of the Arab country, near the border with Yemen, with just over 120,000 residents.

He added that Al-Dayer accounts for 80% of Jazan’s coffee bean production, and that the number of coffee farmers in the region has exceeded 700.

Coffee bean trees are planted and cultivated at an altitude of 800-2,000 meters above sea level. The higher the altitude, the greater the yield and quality. The bean trees need special care, and take up to five years from the time a seed is planted until production.

Hussain said coffee trees should be pruned properly, and their top branches should be cut off so the tree is not taller than 2 meters.

“Planting coffee trees in the kingdom of Saudi Arabia faces several challenges such as labor, water for irrigation and costs. There are no real capital investments in this field,” he told Arab News. “Farmers need support from the time they grow coffee beans to the yield stage in order to cover associated expenses and costs,” he finished.

The Saudi Heritage Preservation Society asked the United Nations Educational, Scientific and Cultural Organization (UNESCO) to provide protection for the ancient art of Khawlani coffee making in Saudi Arabia. The Arab tradition passed down from one generation to the next since the ancient tribes of the Khawlan, who cultivated Khawlani coffee beans over 300 years ago.