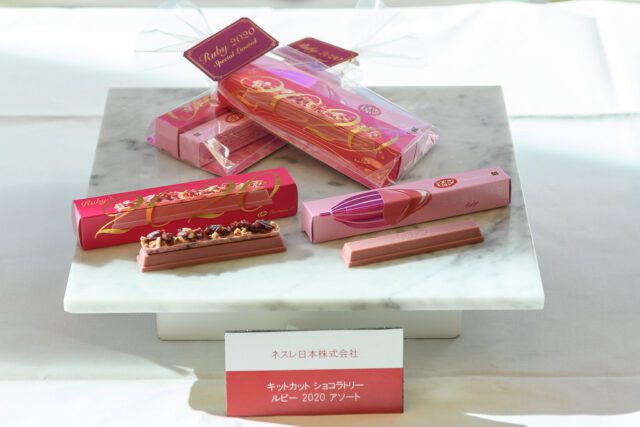 TOKYO, Japan and ZURICH, Switzerland – Two years after the global introduction of the first Ruby chocolate products for consumers in Japan, the fourth type of chocolate continues to make waves. Today, Barry Callebaut AG, the world’s leading manufacturer of high-quality chocolate and cocoa products, revealed that Japan is one of the biggest markets for Ruby chocolate.

With the coming of Valentine’s Day this year, consumers in Japan will be able to get their hands on around 100 different Ruby chocolate products from various international and Japanese brands — in formats including chocolate bars, bonbons, ice creams, biscuits and more.

Pascale Meulemeester, Managing Director for Barry Callebaut in Japan, said, “For decades, the Japanese consumers’ preferences and cultural inclinations have trail-blazed trends in the region and beyond. At first attracted by its unique look, the trendy Japanese consumers have truly embraced Ruby chocolate as the fourth type of chocolate and are extremely curious to try it.”

Research[1] shows that 42% of the Japanese population is aware of Ruby chocolate and over 6 million consumers have already enjoyed it, even though it was not available everywhere in retail until now. 82% say they are interested in tasting Ruby chocolate in the future. And The Nikkei Trendy, a popular Japanese magazine that tracks trendsetters, put Ruby chocolate on its ‘Top 30 Trends List’ in 2019.

“In the past year alone, we have witnessed the market embracing Ruby as a breakthrough innovation and is leading the world with ideas and applications that are setting a new standard for creativity and expertise in the market – and we are just scratching the surface,” Meulemeester continued.

Japan’s obsession with Ruby is here to stay and Barry Callebaut believes that its role is to facilitate the creativity of all brands and artisans alike and in doing so, shape the future of chocolate.

Chocolate manufacturers and artisan consumer brands are rolling out Ruby chocolate products in more than 50,000 distribution and sales points in supermarkets, convenience stores, train stations, hotels and pastry and chocolate shops across Japan this Valentine’s season.

At present, Ruby chocolate for consumption in Japan is being imported. With the increasing demand for Ruby chocolate in Japan, Meulemeester revealed that the company’s chocolate factory located in Takasaki (100 km northwest of Tokyo) is preparing to also produce Ruby chocolate locally for specific confectioneries and customers.

Considered by many chefs and experts as the biggest innovation in chocolate 80 years after White chocolate, Ruby chocolate ingested a new wave of creativity into the chocolate market, inspiring leading artisans and food manufacturers alike to introduce exciting products and applications.

Some of the new Ruby chocolate products that will be available in the market for this occasion:

This growing manifestation of indulging applications rides on Ruby’s promise of a completely new taste experience, which is a tension between fresh berry-fruitiness and luscious smoothness. Ruby is an authentic chocolate made from the Ruby cocoa bean. To create Ruby chocolate, no berries or berry flavor, nor color, is added.