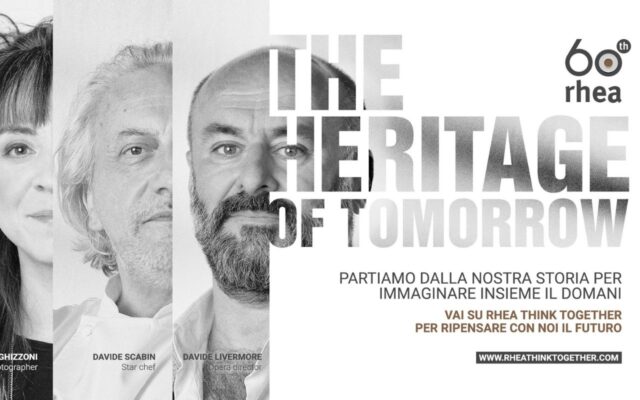 MILAN, Italy – To mark the 60th anniversary of Rhea Vendors Group, the management team at the helm of the company since 2018 has decided to celebrate Rhea’s values and vocation for innovation, social sustainability and corporate culture, as promoted by founder Aldo Doglioni Majer and his son Carlo. A widely respected intellectual and maestro of the opera and theatre, Carlo Doglioni Majer led the company with a vision that looked beyond the confines of vending, proposing innovative projects shaped by his ability to observe and interpret the social and cultural changes taking place around him.

The company’s 60th anniversary is therefore an opportunity to reinforce this social commitment with a project whose name, Think Together, reflects Rhea’s desire to form a network with representatives of the Italian and international worlds of business and culture.

To reflect on topics of interest to both the business world and the general public, and to rethink the future together.

A meeting place for developing and sharing ideas and identifying solutions, envisioning a path that generates value for businesses.

A dedicated website, rheathinktogether.com, available in both Italian and English, includes a series of dialogues on the themes of sustainability, innovation and culture applied to the business and social world, and it will be possible to participate freely in the debate via Rhea’s Linkedin, Facebook and YouTube channels.

The online dialogues are moderated by three Italian artists, the ‘Thinkers’ chosen by Rhea for their close association with the company’s values.

Like Rhea, each of them is a global ambassador of Italian excellence in their own specific field.

Opera and theatre director Davide Livermore has staged performances in the biggest national and international theatres, from Philadelphia to Tokyo, and also opened two consecutive seasons at La Scala in Milan with Attila in 2018 and Tosca in 2019. He is currently Artistic Director of the Teatro Nazionale of Genoa. Through his friendship with Carlo Doglioni Majer, he has been closely associated with the Rhea world for a number of years.

Known for his creativity and innovation, Davide Scabin, Michelin-starred chef of the Combal.Zero restaurant in Rivoli, is one of the most popular Italian chefs in Italy and abroad. In 2013 he designed a range of space food for astronauts.

Simona Ghizzoni is a photographer and women’s rights activist. Her work has won awards from World Press Photo, POYi, and the Aftermath project, and she has received the Burn Magazine Emerging Photographer Grant and the Sony World Photography Award.

“With Think Together Rhea has created a stimulating environment which isn’t as far removed from our normal world as it seems. It is designed to drive creativity for the benefit of both businesses and people’s quality of life. All those who participate in this digital lounge will have the chance to enrich their lives. Rhea’s goal is to develop a shared vision in an area where strength in numbers is more important than ever, which would then hopefully influence a tendency for change which the market can perceive but which hasn’t yet taken form”, remarks Andrea Pozzolini, CEO Rhea Vendors Group.

Kairos, the 60th anniversary machine whose name comes from the ancient Greek meaning “the right or opportune moment” 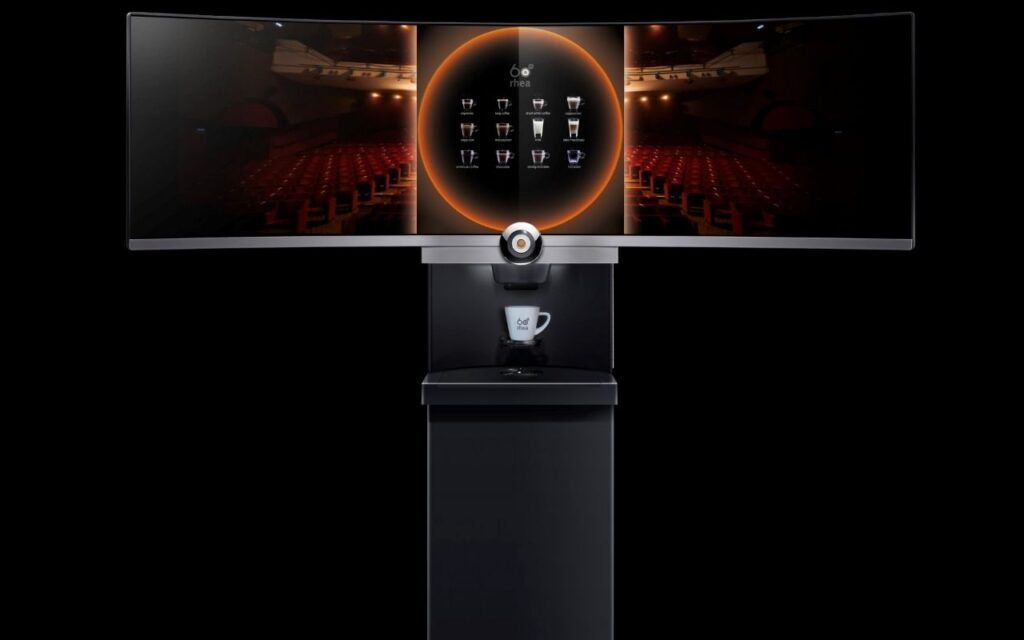 Kairos is the name of the futuristic coffee machine created by Rhea and Davide Livermore to mark the company’s 60th year in the business. A limited-edition machine which combines quality coffee with the value of time: a 32-second coffee break filled with beauty and culture. In fact, the 60th anniversary machine revolutionizes the traditional vending machine with a deliberately oversized screen which, thanks to an app, enables consumers to choose their drink using touchless technology and then go on a 32-second experiential journey.

“The machine we have designed with Davide Livermore to celebrate our 60th anniversary takes us on a 32-second journey filled with beautiful images, powerful sounds and the pleasures of flavor. Davide Livermore is well acquainted with Rhea because he was a great friend of Carlo Doglioni Majer, whose incredible legacy included teaching us to make culture and passion part of the company vision and the designs of our machines. Davide’s celebratory machine combines the quality of time with the quality of good coffee, adding a touch of culture to our coffee break to create a whole new experience”, explains Andrea Pozzolini.

“The theatre has the ability to take us back to our childhoods, enabling us to create magic. The journeys may only last a few seconds, but they can be extremely vivid. Time itself can stand still or speed up with theatre and art. Talking with Rhea, I envisaged preparing the best cup of coffee possible in 32 seconds. I believe that in this day and age, one of our biggest achievements is the possibility of taking some time for ourselves and forgetting about our anxieties. And so my aim was to bring all these factors together: the imaginative power of the theatre with a 32-second break in time which we can dedicate to ourselves. A chance to restore contact with ourselves through the medium of a multisensory journey”, explains Davide Livermore.

A celebratory video featuring Rhea’s 60th anniversary machine can be viewed on rheavendors.com

Think Together, the Rhea digital lounge, goes live on 21 October 2020 with the first part of the video debates and will be constantly updated with new content

Rhea Vendors Group, founded by Aldo Doglioni Majer in 1960, is one of the largest producers of customized vending machines in the world. For sixty years, Rhea has stood out for its wide international reach, high-level design, state-of-the-art technology, and ‘Made in Italy’ excellence. With headquarters and manufacturing based in the province of Varese and 12 foreign branches, Rhea is proud of having spread coffee culture to over 90 countries around the world.

In the last twenty years, under the leadership of Carlo Doglioni Majer, son of the founder and esteemed intellectual and artistic director of opera and theatre, Rhea has laid the foundations for an important transformation: from a global player in vending to a pioneer in the introduction of vending to the hospitality, micro-market, and out-of-home sectors, confirming its mission to interpret and often anticipate a constantly evolving market. Since Carlo Doglioni Majer’s passing in 2018, by his express wish, Rhea has been led by a team of four managers who have been with the company for many years. 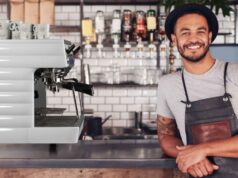 Carimali Bubble: a traditional and trendy espresso machine with an attractive design 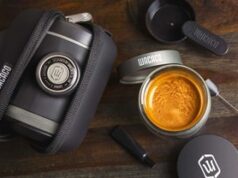