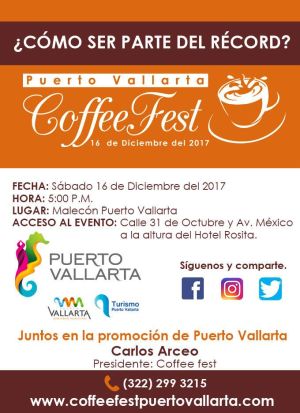 PUERTO VALLARTA, Mexico – Drinking coffee is a habit of millions of people around the world, but doing it in a public event simultaneously with other fans of that drink is the proposal of the first edition of the Coffee Fest Puerto Vallarta 2017, which will also try to break the Guinness World Record for the most people drinking coffee simultaneously in one place.

The fun starts at 4:30 pm on Saturday, December 16 by the Seahorse sculpture on the Malecón in downtown Puerto Vallarta (near the Hotel Rosita, Calle 31 de Octubre and Av. México), where coffee will be offered free of charge to all attendees.

At 5:30 pm, everyone will drink it at the same time as Puerto Vallarta attempts to break the current record, which was set in 2009 by the city of Cologne, Germany with 8,162 participants.

A member of the Guinness World Record team will be on site to verify the number of coffee drinkers at this historic event, which was organized by two local entrepreneurs with the support of the Tourism Trust; the City Council through the Municipal Tourism Directorate; the Vallarta Institute of Culture; the multinational coffee company, Nescafé; and many local businesses.

“Other attempts have been made in Mexico City and in Colombia, but in the first case the record was not broken; and in the second case, the record was broken, but it could not be validated by an international Guinness verifier,” said Carlos Arceo Real, one of the two organizers of this event, the other being hotelier Luis Angarita.

In addition to bringing coffee lovers together to achieve a new world record, this FREE and family-friendly event will feature live music by the La Auténtica Sonora Santanera group, Ahí Ná Má, and other bands, along with coffee exhibition and tasting stands where attendees will be able to learn more about this popular beverage.

The Coffee Fest Puerto Vallarta 2017 also has the support of the Fire, Civil Protection and Public Safety Department for logistics. There will be two main accesses, in front of the Municipal Presidency and on the northern entrance of the Malecón, where participants will receive numbered bracelets.

“Vallartenses and tourists alike are invited to come drink coffee and help us beat the world record, in what will be a great party in one of the most beautiful places on the Mexican Pacific,” added the event organizer.

Breaking this record will result in the world-wide promotion of Puerto Vallarta, as the Guinness Book of World Records is the second most popular book on the planet, (after the Bible), with more than 3 million books in 22 languages sold in 100 countries.

If you love coffee, make plans now to be on the Puerto Vallarta Malecón at 4:30 pm on December 16, 2017 for this fun and free event that is sure to be ‘one for the books.’