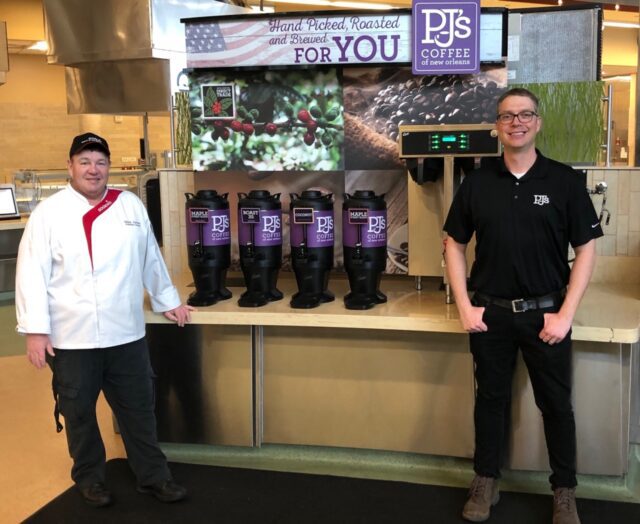 NEW ORLEANS, U.S. — PJ’s Coffee of New Orleans  has some big news brewing for our men and women in uniform. The brand recently launched a partnership with Sodexo, the world’s leading provider of food services, to feature its coffee in select United States Marine Corps bases across the country, spanning from California to South Carolina.

Military personnel can enjoy an array of coffee blends in 51 mess halls and 62 “brew stations,” within nine bases. PJ’s Coffee currently operates over 100 stores in 13 states in the U.S., and Vietnam and Kuwait. The company expects to open 35 to 40 new stores this year.

Continuing its support of our nation’s active duty and veteran military members, PJ’s Coffee is also launching a new blend: Sunrise Salute. The medium roast coffee blend will be available for purchase on www.pjscoffee.com. To show gratitude to active duty and veteran military members, PJ’s Coffee has made a donation to Fisher House Foundation, a non-profit organization building comfort homes where military and veterans families can stay free of charge while a loved one is in the hospital. The donation will directly benefit the new Fisher House location that is currently being constructed in New Orleans, Louisiana.

“The PJ’s family includes many U.S. veterans which makes this partnership with the Marine Corps that much more exciting for us,” says Peter Boylan, President of PJ’s Coffee and U.S. Army veteran. “We have a passion for supporting our military community and are thrilled that we can give a taste of our coffee to our brave men and women in uniform in conjunction with Sodexo’s expertise in serving our troops in bases across the country.”

“PJ’s Coffee of New Orleans serves an outstanding product and we’re proud to have them as our coffee partner in nine Marine Corps base camps,” says Brett Ladd, CEO of Sodexo Government Services Division.

PJ’s Coffee is an International Franchise Association VetFran member, proudly offering qualified veterans a 20 percent discount on the initial franchise fee. In 2017, PJ’s Coffee launched an annual Veteran Franchise License Giveaway where one veteran is awarded a free franchise license. In its first year, PJ’s Coffee received 117 applications from veterans around the country. The program has been so successful, the brand has continued to award one veteran franchise license each year since inception.

Nestlé reports organic growth of 2.8% in 1H despite slowdown as coffee...