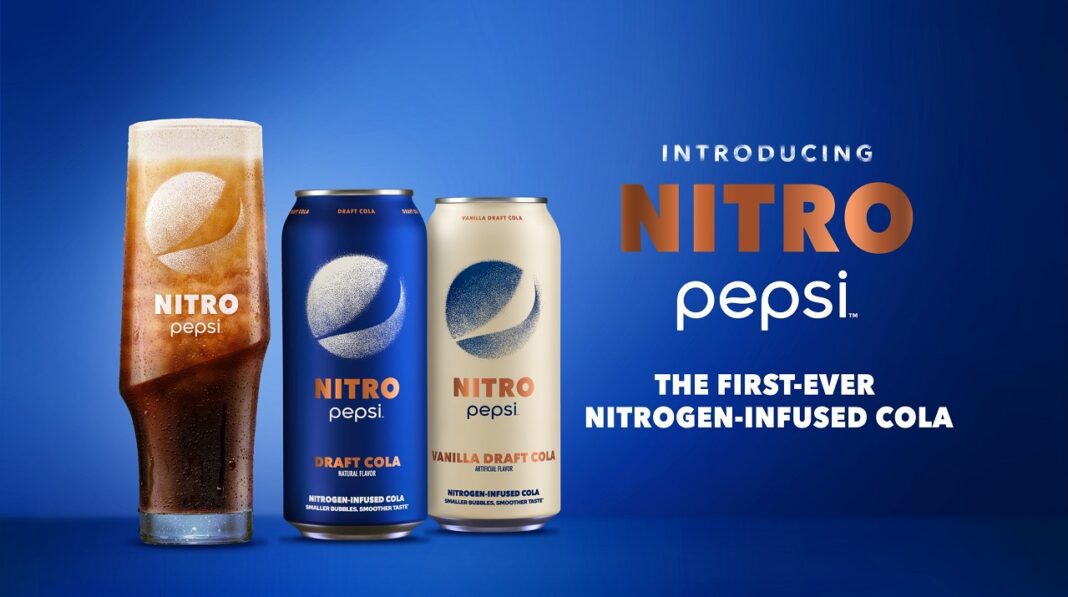 PURCHASE, N.Y., USA – The cola category has been around for over a century. While it’s had its share of flavor and packaging innovation, one thing has remained the same since the category’s inception – the bubbles. Pepsi is taking on its most ambitious feat yet, reimagining the cola experience with a massive innovation – Nitro Pepsi. Here is what Pepsi states in a press release.

Nitro Pepsi is the first-ever nitrogen-infused cola that’s actually softer than a soft drink – it’s creamy, smooth and has a mesmerizing cascade of tiny bubbles topped off by a frothy foam head

Nitro Pepsi will have you reconsider what you know about cola. Smaller bubbles, also infused with nitrogen, create an unbelievably smooth, creamy texture made possible by a unique widget placed at the bottom of every can. This is the first time this type of widget technology, often seen in beer and coffee products, is being applied to the cola category and creates the frothy, foamy, smooth texture unique to the beverage. It does not look and taste like a traditional cola or soda, and in fact, it’s best consumed differently as well.

While Nitro Pepsi is enjoyed from the can, there are a few steps you can take for optimal consumption. The new beverage is:

The new beverage will be available in two delicious flavors, Draft Cola and Vanilla Draft Cola, in newly designed cans in both single serve and 4-pack varieties.

“While soda has been a beverage of choice for so many consumers over the past century, some people still cite heavy carbonation as a barrier to enjoying an ice-cold cola. With this in mind, we wanted to come up with a new way for people to enjoy delicious Pepsi cola, but with a new experience around the bubbles,” said Todd Kaplan, VP of Marketing – Pepsi. “Nitro Pepsi is a first-of-its-kind innovation that creates a smooth, creamy, delicious taste experience for fans everywhere. Much like how nitrogen has transformed the beer and coffee categories, we believe Nitro Pepsi is a huge leap forward for the cola category and will redefine cola for years to come.”

Pepsi announced its intent to use this nitro technology in 2019 and has been working tirelessly to build out this innovation ever since. Finally, the beverage will be available nationwide on March 28. Accompanying the roll-out will be a fully integrated marketing campaign including a new national television commercial (LINK) that reinforces the uniquely smooth and creamy experience of the beverage. In addition, fans will be able to try Nitro Pepsi ‘on tap’ for the first time beginning March 25 in the Sky Lounge at The High Roller Observation Wheel at THE LINQ Promenade on the Las Vegas Strip.