Orbit Coffee: the new energy and functional drink that comes as a powdered mix-in 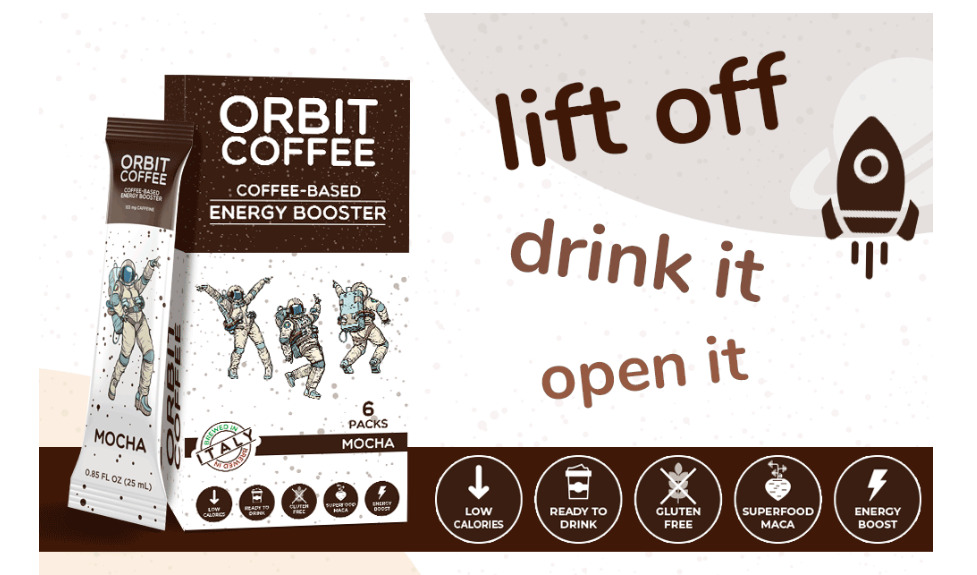 FORT LAUDERDALE, Fla., U.S. – Orbit Coffee, a subsidiary of Italian company, EthicSport, is gearing up for the release of their flagship product. Orbit has been innovating the energy drink industry by creating a  nutrition-packed, long-lasting beverage that comes as a powdered mix-in. Orbit is gaining recognition with their small, portable packets because it means that customers can take the product anywhere when they need a quick pick me up.

Orbit Coffee offers a distinctive coffee flavor as it is made with real coffee, selected and roasted in Italy. Orbit takes its high-quality powdered coffee and adds sequential carbohydrates, and maca, with 133mg of caffeine per serving, creating a unique type of focused energy.

Some carbohydrates burn quickly, like fructose and dextrose, and others burn at a slower rate, like maltodextrin and isomaltulose. Because their product has both fast-releasing and slow-releasing carbohydrates, Orbit Coffee does not cause a sudden drop in energy when the caffeine begins to wear off, instead the slow-acting carbs maintain even, sustained energy levels.

Orbit Coffee prioritizes not just a large initial burst of energy, but lasting effects of focused energy. One of the primary ingredients that makes Orbit so special is the addition of Maca. Maca powder comes from the Maca plant, a superfood native to Peru. Maca can only be grown at a high altitude of more than 12 thousand feet. Maca is mainly used for its root, which is made into powders and extracts that are shipped all over the world. While maca has become more popular within the world of health and wellness, it is still a unique ingredient for a product such as Orbit Coffee.

Orbit’s coffee-flavored energy supplement is designed to produce a sustained wakeful feeling that is unmatched by either traditional energy drinks or a regular cup of coffee. Another reason why Orbit does not cause the same type of sudden “crash” is because their product does not rely on sugar as its main energy booster. On average, energy drinks contain around 29 grams of sugar per serving, and even Americans who opt for a sweetened cup of coffee instead are drinking around 14.5 grams of sugar. Orbit Coffee only contains 9 grams of sugar in total, even with its delicious mocha flavor.

Orbit Coffee’s goal is to present an appealing new alternative for supplemental energy, and they are excited to introduce their product to the U.S. market. Though Orbit is produced in Italy, they have a home base in Brooklyn, New York, and hope to expand the reach of their products to all 50 states.

Orbit Coffee will be available online and in stores in the United States as early as 2020, with a wider variety of retail partners coming in 2021. Follow them online at https://www.orbitcoffee.us/our-coffee