For Q4 2015, Operational Profit After Tax and Minority Interest (“Operational PATMI”), which excludes exceptional items, was S$88.2 million or 16.2% lower year-on-year due to higher depreciation, amortisation and net finance costs.

The results for Q4 2015 and 12M 2015 include a change in the presentation of fair value gain / loss of the Company’s equity investment in PureCircle Limited (“PCL”). The investment in PCL was previously fair valued at the end of each reporting period, based on its prevailing share price, and any resultant non-cash fair value gain or loss was recorded under Other Comprehensive Income (“OCI”), in accordance with SFRS 39. As a result of the change, the cumulative non-cash fair value changes of the PCL investment were re-classified to the profit and loss statement from OCI in Q4 2015 resulting in an increase of S$192.6 million in OCI and a corresponding reduction in the profit and loss statement, which can be seen on page 2 of the financial statements in the SGXNET. However, there is no change to the Company’s total equity (including reserves) or cash flow position. Please refer to pages 5-6 of the Management Discussion and Analysis statement for further details.

Other net exceptional losses of S$103.5 million resulted from specific actions taken to optimise the portfolio including the restructuring of Dairy operations in Uruguay, transaction expenses for the acquisition of ADM Cocoa and the buyback of convertible bonds, which were partly offset by the gain on the sale-and-leaseback of palm plantations in Gabon.

Sales volumes and revenues were up 9.5% and 11.7% respectively as growth continued in the prioritised platforms, including Cocoa where the results of ADM Cocoa were consolidated.

Sales volumes and revenue were lower year-on-year by 10.8% and 3.6% respectively as Olam continued to execute on its business strategy to grow in prioritised platforms while reducing volumes or exiting lower-margin businesses.

Net finance costs were down from S$474.5 million a year ago to S$448.9 million as the Group continued with its debt optimisation initiatives despite a significant increase in invested capital.

The Group generated positive net operating cash flow of S$154.9 million for 12M 2015. However, it generated negative Free Cash Flow to Firm (“FCFF”) of S$2.1 billion, primarily on account of the acquisition of ADM Cocoa and McCleskey Mills (“MMI”) for S$1.9 billion.

The Board of Directors has recommended a final ordinary dividend of 3.5 cents per share, bringing total dividends for the 18-month financial year ended December 31, 2015 to 6.0 cents per share.

Olam’s Co-Founder & Group CEO Sunny Verghese said: “We continued to deliver strong operational performance in 2015 despite significant volatility in global commodity and currency markets. Reported performance was impacted by our decision to change the basis of presentation of our equity investment in PureCircle, although this had no impact on our total equity or cash flow position. We continue to believe in the strategic position, operating performance and growth prospects of PureCircle.

“We took significant actions in 2015 to execute on our strategy including the acquisition of ADM Cocoa and McCleskey Mills, and more recently, the wheat milling and pasta manufacturing assets of the BUA Group in Nigeria. Another key milestone was the strategic partnership with Mitsubishi Corporation, which is an integral part of re-aligning our shareholder base with more long-term shareholders.”

Olam’s Executive Director and Group COO, A. Shekhar said: “We are pleased with the continued broad-based growth in operational earnings during the year. Our debt optimisation programme has reduced our effective cost of borrowing. We continue to be disciplined in executing our strategic plan to generate positive free cash flow as we grow our earnings.” 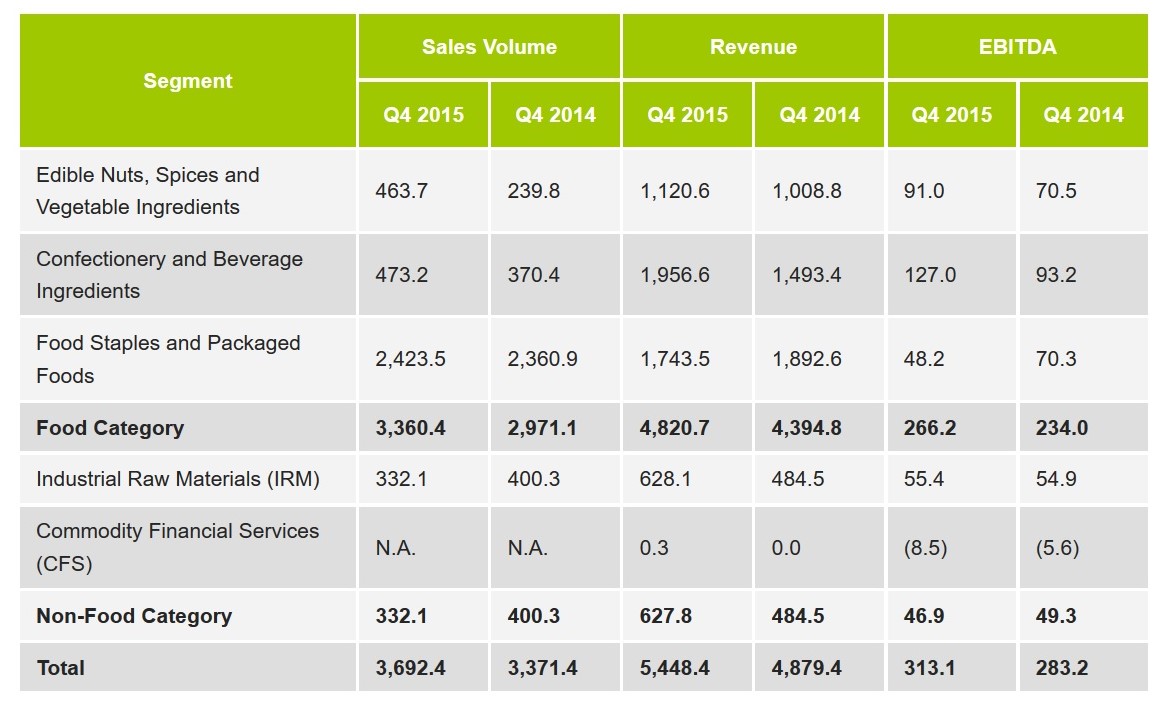 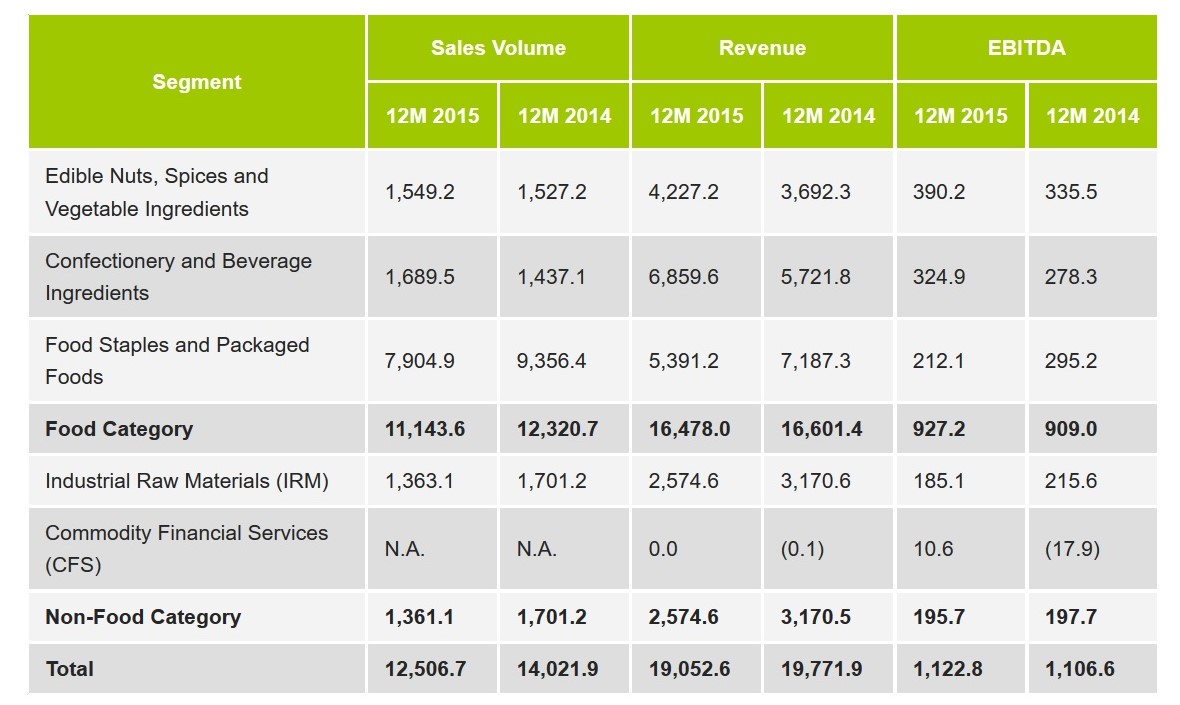 The Edible Nuts, Spices & Vegetable Ingredients segment registered a 1.4% year-on-year volume increase on higher peanut volumes resulting from its MMI acquisition. Revenue grew 14.5% on the elevated prices of almonds and cashews. EBITDA grew 16.3% as the almonds business continued its strong performance as did the hazelnut, cashew and the US Spices & Vegetable Ingredients businesses. MMI also contributed to EBITDA growth, although this was partially offset by the underperformance of the Argentinean peanuts business.

The Confectionery & Beverage Ingredients segment recorded a 17.6% increase in volumes for 12M 2015, driven by higher Cocoa and Coffee sales. Segment revenues grew by 19.9% as a result of higher volumes and cocoa prices. EBITDA grew by 16.7% with increased contribution from the Coffee platform that was partly offset by a lower contribution from Cocoa supply chain operations. The segment’s results included earnings from ADM Cocoa which were consolidated from October 2015.

Food Staples & Packaged Foods volumes fell 15.5% mainly due to lower traded volumes in Grains, Sugar, Palm and Rice. Revenue decreased by 25.0% due to lower volumes as well as lower prices of all commodities in this segment. Although the Grains and Rice businesses performed better at the EBITDA level, overall segment EBITDA declined by 28.2% due to continued underperformance of the Dairy farming operations in Uruguay and the adverse impact of currency devaluation on Palm refining operations in Mozambique and the Packaged Foods business, as well as lower contribution from Sugar and Palm trading.

Commodity Financial Services registered an improved EBITDA of S$10.6 million in 12M 2015 versus a loss of S$17.9 million a year ago.

The long-term trends in the agri-commodity sector remain attractive, and Olam is well positioned to benefit from this as a core global supply chain business with selective integration into higher value upstream and mid/downstream segments. Olam believes its diversified and well-balanced portfolio with leadership positions in many segments provides a resilient platform to navigate current uncertainties in global markets. 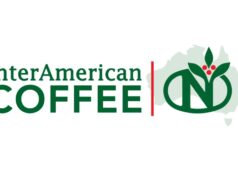 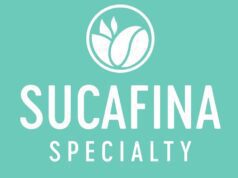