Olam International reports 26.6% growth in PATMI for first quarter of 2017

This was primarily due to improved operational performance, which offset higher depreciation and amortisation and finance costs resulting from strategic acquisitions and capital investments made in 2016. Operational PATMI, which excludes exceptional items, rose 14.1% to S$143.9 million.

Sales revenues were up 21.9% while sales volumes were up 50.5% largely on opportunistic trading volumes in Grains during Q1 2017.

Olam’s Co-Founder & Group CEO Sunny Verghese said: “We are pleased to have started the year with a strong set of results despite continued global uncertainty.

“Our results for this quarter reflect continued progress in pursuing growth in our priority clusters, while constantly rebalancing our portfolio to ensure a good mix of gestating and contributing assets. We remain focused on continuing to deliver long-term, sustainable value for our shareholders.”

Olam’s Executive Director and Group COO, A. Shekhar said: “Despite price volatility in some commodities in our portfolio, we achieved strong EBITDA growth in Q1 2017, reflecting the strength and diversity of our business, select investments and decisive actions to address any areas of underperformance.” 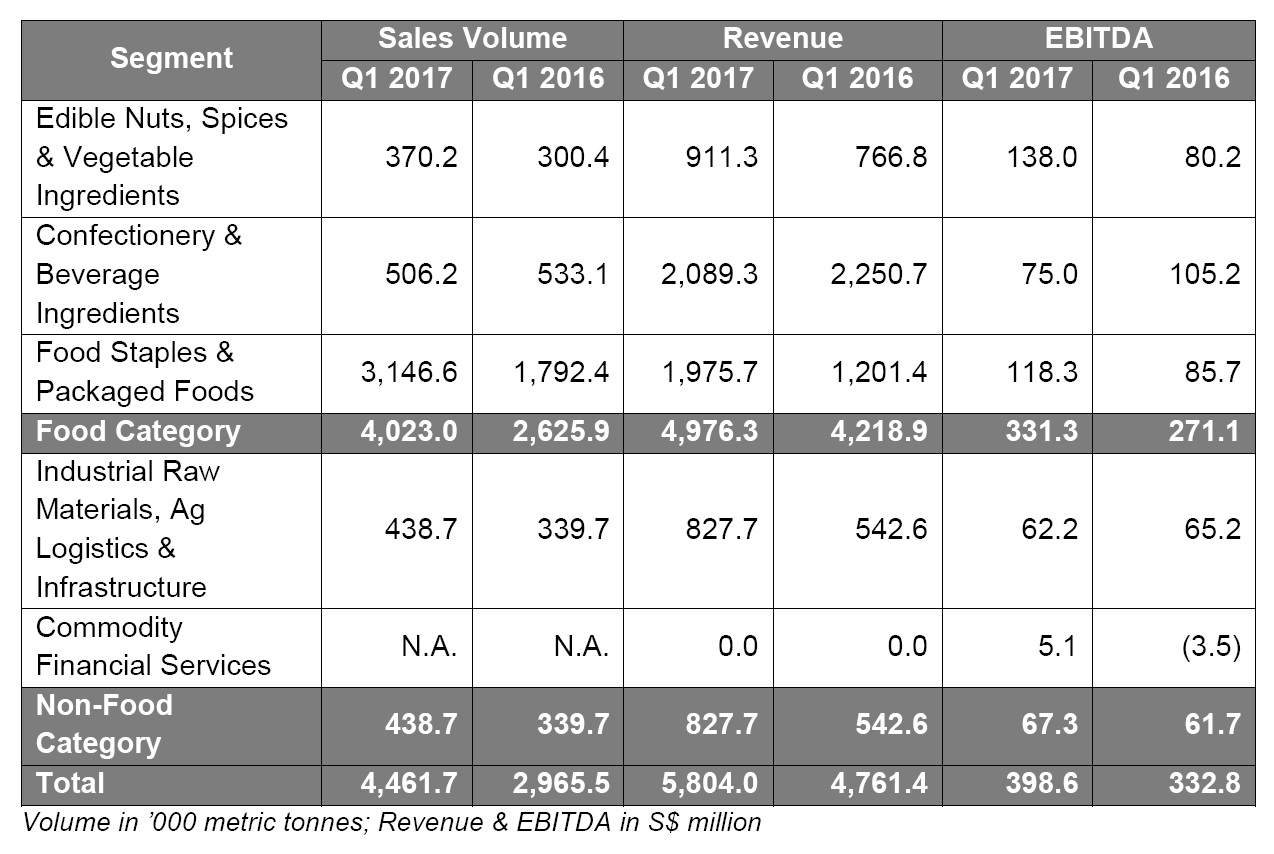 Revenue for the Edible Nuts, Spices & Vegetable Ingredients segment grew 18.8% on higher volumes during the quarter, as well as higher prices for cashews and almonds compared with Q1 2016. EBITDA grew 72.1% on improved contribution from the Edible Nuts platform, particularly peanuts, cashew and almonds.

The Confectionery & Beverage Ingredients segment recorded a 7.2% decrease in revenue on lower volumes and lower cocoa prices, partly offset by higher coffee prices. EBITDA declined 28.7% as improved contribution from Coffee was offset by lower contribution from Cocoa – a result of margin pressure on its supply chain and trading caused by sharp market movements in late 2016 and early 2017.

The Food Staples & Packaged Foods segment saw a 64.4% increase in revenue mainly on opportunistic trading volumes in Grains. EBITDA rose 38.0% as all platforms within the segment recorded improved performance over Q1 2016. Grains was a key growth driver as its origination and trading business, as well as its wheat milling operations in West Africa, continued to perform well.

Revenue for the Industrial Raw Materials, Ag Logistics & Infrastructure segment increased by 52.5% on higher volumes and higher cotton prices. However, EBITDA declined by 4.6% as underperformance from Wood Products offset growth from Cotton.

Despite macro-economic uncertainties likely to continue into 2017, Olam believes its diversified and well-balanced portfolio with leadership positions in many segments provides a resilient platform to navigate current challenges in the commodity markets.

While Olam continues to execute on its 2016-2018 Strategic Plan and pursue growth in its priority clusters, it remains focused on turning around underperforming businesses, ensuring gestating businesses reach full potential and achieving positive free cash flow.