NUOVA SIMONELLI – After WBC, a big party with the best technology

BELFORTE DEL CHIENTI, Italy – The World Barista Championship (WBC) was held this year in Rimini and will be remembered for being the first to be won by an Asian champion.

Nuova Simonelli, however, will remember it because the winner, Hidenori Izaki from Japan, as well as several other competitors were not content with using just the official coffee machine for the competition, the Aurelia II Competition with T3 technology, but wanted to ensure a superb performance with the latest generation grinder from Nuova Simonelli, the Mythos one has Clima Pro Technology.

Izaki used two of these grinders. With his excellent knowledge of the coffee he chose for the competition and his perfect craftsmanship, he found a valuable ally in the Mythos One when climbing to the top of the podium.

The victory of the young two-time Japanese champion was greeted by a standing ovation from the large international audience at the World Barista Championship, who followed the entries of all 54 national champions and the exciting final on Thursday 12 June with great interest.

For Hidenori Izaki, however, the party was not over in Rimini. For a champion like him, who relies on technologies that Nuova Simonelli puts at the service of professional baristas every day, winning the World barista Championship could only be properly celebrated at Simonelli & Friends.

This meeting was organized so baristas and coffee operators could get to know better the manufacturer of the official coffee machine for the WBC, the Mythos One and many other advanced machines for coffee and cappuccino.

Izaki was among the guests of honor, along with other champions from the 2014 WBC tournament and many people in the industry. One hundred and fifty guests from all over the world visited the headquarters of Nuova Simonelli in Belforte del Chienti.

They could see up close how the machines are made and the testing process. 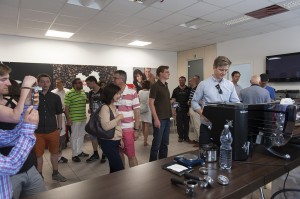 The experts explained the “secrets” of the innovative technologies that the company offers through its extensive range of products, from the revolutionary T3 and the new Gravimetric to EasyCream, the new system for particularly creamy cappuccinos, which aroused great interest in visitors to the Nuova Simonelli stand at the World of Coffee, the event that accompanied the WBC at the Rimini Expo Centre. Simonelli & Friends had two particular moments of warmth and joy. The first was when all participants signed the first stone of Nuova Simonelli’s new building which will house offices, a showroom and a company museum.

The second was a convivial gathering to revive the bonds of friendship between the company and its many loyal baristas and customers from 117 countries. This final part of Simonelli & Friends was at Castello della Rancia di Tolentino, a XIV century castle famous for being the center of a battle in 1815 between the Austrian army and the King of Naples, Gioacchino Murat.

During the fun evening some guests wanted to wear gorgeous vintage clothes, from the tourist association in Mogliano. Guests could relive moments of Italian tradition and history, as well as get to know Nuova Simonelli’s roots, from where it looked afar to be closer to the vast world of coffee.