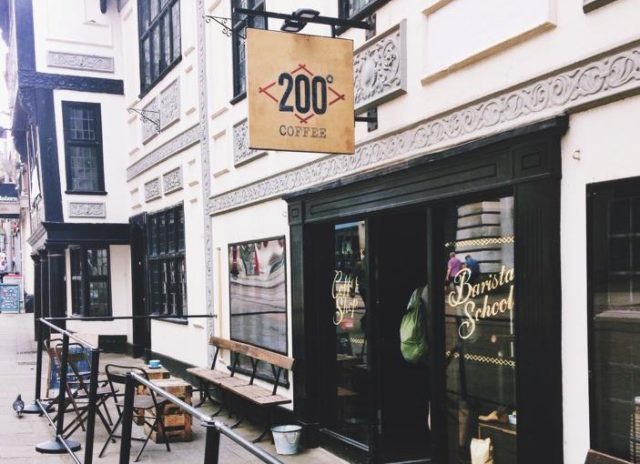 NOTTINGHAM, UK – Nottingham’s 200 Degrees cafe brand is expanding further across the UK with the opening of six new shops.

The Nottingham-based coffee company currently has four coffee shops, two in Nottingham and one each in Leeds and Birmingham.

Two of the new shops will be in Leicester and Cardiff, but the remaining four venues are yet to be decided by the company.

Tim Moss, who runs the company’s roastery on Meadow Lane, said: “We wanted to get the atmosphere and coffee right before we expanded and that’s why we waited with our initial expansion from our cafe on Flying Horse Walk.

“We had to ask ourselves if expanding was the right decision, because we did not want lose the local aspect of our cafes but we made the decision because we feel we can still keep every store local by connecting to the community they are in,” Moss added.

Coffee beans for the business are currently roasted at Heston House on Meadow Lane and despite the growth the coffee beans will continue to be roasted there and then transported to the outlet across the UK.

Rob Darby, director at 200 Degrees, said: “Coffee shops are experiencing a renaissance at the moment, with a desire from both shoppers and professionals for high quality, fresh beverages and inspired menus.

“We look to double the number of our coffee shops and add more barista schools with them”.

200 Degrees opened the first shop on Flying Horse Walk in 2014 and has since expanded in the city to another shop on Carrington Street.

Moss hopes the new shops will have the same ‘family feel’ present as their current shops, saying: “Our brand follows a certain model but we hope that each expansion bring its own local influence.

“The new expansions that have a barista school will have events to bring the community and cafe closer together.”

Darby and business partner Tom Vincent founded 200 Degrees as a coffee roaster but later expanded it to coffee shops.

Nestlé Philippines increases purchase of local coffee through the Nesc...