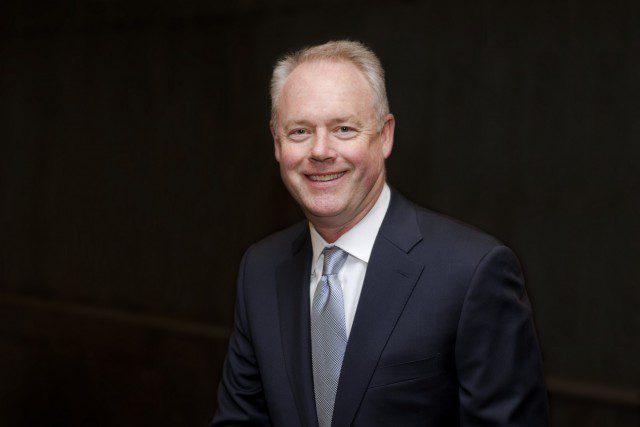 SEATTLE, U.S. – On Monday, Kevin Johnson becomes the CEO of Starbucks — the first time in nine years Howard Schultz has not been at the helm of the coffee empire he began building 30 years ago.

Tall and polished, with a ready smile and a hearty handshake, Johnson brings to the role a deep knowledge of the company, having served on the company’s board for eight years and as president and chief operating officer for the past two.

He also brings tech leadership experience, having been CEO of Juniper Networks and president of the Platforms and Services division at Microsoft.

Johnson takes over at a time when Starbucks is facing some challenges: Its sales growth at stores open at least a year has slowed recently, and investors seem skeptical about its growth strategies.

Starbucks shares, which had outpaced the Nasdaq index for five- and 10-year periods, have been down over the past year, lagging the Nasdaq by 20-plus percent.

In an interview last week in Johnson’s office at the Starbucks headquarters in Sodo — an office with a side door leading to Schultz’s office — the 56-year-old executive talked about those and other issues, including whether he’s worried Schultz will hover over his shoulder, the company’s social agenda, and his favorite coffees.

Here is an edited version of the interview published by The Seattle Times.

Q: Howard Schultz has said that you are more equipped to be CEO going forward than he is. You’ve served on Starbucks’ board and as president and COO. What are some additional things you did to prepare for the CEO role?

A:In the last year, I changed the way I was doing store visits. When I visit a store, I’d allocate an hour and a half, and I’d get five to seven partners, and we’d sit down and each of us would share what brought us to Starbucks and what Starbucks means to each person, and their hopes and aspirations. In doing that, I developed a deeper understanding of the company.

Q: Howard Schultz is known for his charismatic, entrepreneurial, intuitive approach to leading the company. How would you characterize your style of leadership?

A: There are many things that Howard and I have in common but there also things we do in different ways. For example, Howard and I both believe in innovation. Howard approaches it from the perspective of an entrepreneur merchant. I approach it oftentimes from the perspective of the technology leader that operates a global business at scale. We both are connected by our love for the mission, the values and the guiding principles of the company

Q:Are you worried he’ll be looking over your shoulder?

A: No, not at all. He’s my partner in all of this. We’ve tried to be very thoughtful about how to orchestrate this transition. Part of that has to do with being clear about roles. Howard has a role in the company. He is driving the innovation of our Starbucks Reserve brand, the Roasteries, the Reserve stores. Howard appreciates and respects the fact that I need to establish my own leadership agenda, which means I need some space to do that. And at the same time, I get great comfort by knowing he’s right there in the next office.

Q:Howard’s story is one of building the company into a global empire, and returning to get it back on track. How do you see your story?

A:My long-term aspiration is that when Starbucks is 100 years old, it will be one of the few Fortune 500 that has been in existence for that long because we were able to build the institutional capability for generation after generation of leaders who showed their love for the brand in a way that is true to core principles of the company.

That said, we’re operating at scale — 26,000 stores around the world. And over the next five years, our strategic plan has us building another 12,000 stores. Our ability to deal with that scale and complexity — and yet still create a unique customer experience — is what I hope to continue to bring to the table.

Q: How did and will your tech experiences inform your decisions at Starbucks?

A:I joined Microsoft in the early 1990s, at a point in time when the company was having to scale global operations. I led both our global technical support and worldwide sales and marketing. In that experience, I had the opportunity to figure out how do you build a multinational organization that has to operate in many, many different countries. Similarly at Juniper Networks.

Q: Does the experience of having worked at Microsoft and Juniper translate into a better understanding of what technological innovations Starbucks needs to make, and the pace and culture that need to be in place to do that?

A: I don’t know if it does. Being aware of technology innovation is a good thing. That comes from a variety of sources. Sometimes it comes from just having kids, and a grandson now, and watching what they use.

The one thing that being in the tech industry has taught me that’s applicable is that you have to constantly be innovating in a way that’s relevant to your customers. That is true at Starbucks, whether that’s food and beverage, digital or store innovation.

Q: Comparable sales have been slowing a bit in the past quarters. What’s driving that? It can’t just be congestion from mobile order-and-pay.

A: I think it’s three things. No. 1: The prior year comp-store sales were very high. No. 2: If you look at the restaurant industry, I think they’ve seen comp-store sales decline, and we’re performing well above the restaurant industry in general. And the third: When you look at the volume of customer occasions that we’re serving in our stores, there’s work we’re doing to help give us a bit more throughput in our stores.

Q: Can you talk about the actions you’re taking to deal with the mobile order-and-pay congestion?

A: At high-volume stores, we’ve added staffing at peak with some new roles specifically to connect with customers who order using mobile order-and-pay. We’ve added some staff on the beverage-production side. We’re piloting some technologies, such as when you order with the mobile app, you’ll get a message [notifying you when] your order is ready.

Q: During Investors Day in December, you and Howard shared a five-year plan including growth in the number of stores, expansion in China, and increasing sales at lunch. Are there other sources of new growth?

A: We see growth in our channels business at groceries and mass merchants mainly because we’ve been taking market share of at-home coffee, whether it’s roast and ground or K-Cups. … We’re launching a new food offering in Chicago called Mercato — a fresh lunch set of offerings — sandwiches and salads [created by Starbucks chefs].

Q: Starbucks has huge expansion plans in China and is growing in India. Are you concerned that Starbucks will need to expand into new markets to keep its high growth rate?

A: There’s so many more places we can build stores where there’s customer demand for Starbucks. That’s why we think we can confidently say: building 12,000 stores in the next five years — there’s demand to support that. Half of those [will be] in the U.S. and China.

Q: Are you concerned that President Donald Trump’s “America first” stance on trade and dealings with other countries will hurt Starbucks?

A: We’ve got a presence in 75 countries around the world. I think we’ve got a strong connection in every market we work in. We’re certainly interested in seeing what the new administration comes up with in terms of trade policy and tax policy. But I don’t think there’s anything necessarily concerning at this point.

Q: Under Howard, the company got involved in various social issues. Do you think the company will continue to do that?

A: The social-impact agenda we have is one that we believe is good for Starbucks and for our partners.

A few examples: The sustainability agenda that we have is about the research we’re doing in agronomy to create coffee trees that are rust resistant and then donating those trees to farmers around the world.

Around opportunity, in November 2013, we made a commitment to hire 10,000 veterans or spouses of the military in five years. We’ve just fulfilled that and we upped that to hire 25,000. Those people we’ve hired are wonderful; they bring so much to the company.

Recently, our announcement to hire 10,000 refugees globally is the first time we’ve stated a global goal. It’s in recognition that in many countries we do business in, their governments have made decisions to bring refugees into the country. So we feel we can play a role in helping those refugees create an onramp to their new lives. …

Q: Are there social issues that you feel strongly about that you’d like to see the company take a stance on?

A: The ones that I feel strongly about, we have been taking a stance on. Finding opportunities for people to have a better life, finding ways to do more about sustainability. There are certain things locally I’ve been personally involved in. One of them is related to homelessness [raising money for the No Child Sleeps Outside campaign].

Q: What is your usual coffee and how do you prepare it? What’s your favorite Starbucks drink?

Jab’s CEO Olivier Goudet: «We look forward to the next phase of ...