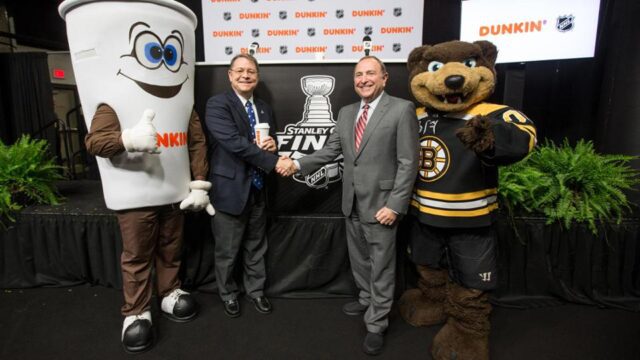 Dunkin’ will remain a significant presence across the NHL’s broadcast and digital platforms in the U.S., and will continue to be prominently featured at NHL jewel events – such as the NHL Winter Classic®, NHL® All-Star Weekend and NHL Stadium Series™ – through advertising, in-arena signage and Jumbotron displays, as well as on-site activations.

Dunkin’ also maintains a multimillion dollar partnership with NBC Sports for custom in-game features and dasherboard visibility, as well as advertising across broadcast, digital and social media channels throughout the NHL season.

“Hockey is an important part of Dunkin’s history and heritage, and we are proud to be the brand recognized for serving millions of NHL fans and keeping players, parents, coaches and teams across the country running with coffee, donuts and breakfast sandwiches all season long,” said Tom Manchester, senior vice president, Integrated Marketing, Dunkin’ U.S.

“We are honored to continue our partnership with the National Hockey League, playing a part in fueling the increasing popularity of the sport, and the passion of all those who live and love hockey as much as we do.”

“With the excitement of tonight’s Game 5 of the Stanley Cup Final coming on the eve of National Donut Day, it’s the perfect time to announce our partnership renewal with Dunkin’,” said Evin Dobson, NHL group vice president, Partnership Marketing.

“Dunkin’ is a powerful brand and a tremendous partner that is synonymous with hockey at all levels. NHL fans love Dunkin’s coffee, donuts and breakfast sandwiches and can’t get enough of the entertaining advertising campaigns starring NHL players. We’re thrilled to continue our partnership with Dunkin’ and look forward to collaborating on more opportunities for deeper engagement and emotional connections with hockey fans.”

To learn more about Dunkin’, visit www.DunkinDonuts.com or subscribe to the Dunkin’ blog to receive notifications at https://news.dunkindonuts.com/blog.