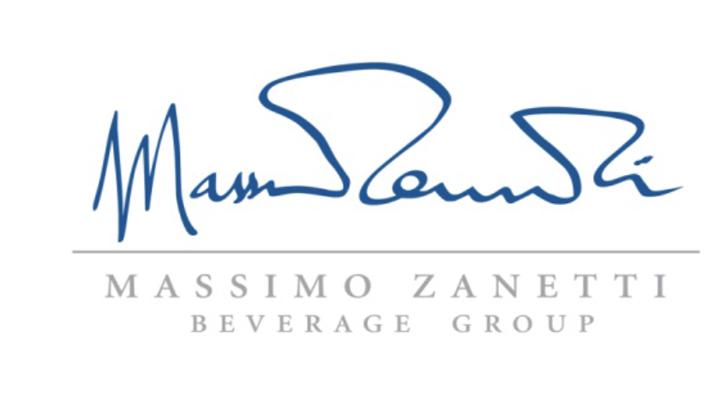 VILLORBA, Italy — The Board of Directors of Massimo Zanetti Beverage Group S.p.A. (Mzb Group), one of the leading brands worldwide in the production, processing and marketing of roasted coffee and other selected categories of colonial products, listed on the Milan Stock Exchange, approved yesterday the 2018 financial results.

“2018 ended with a slight decline in revenues, mainly due to the raw material price trend, but with a more profitable mix which allowed us to obtain an increase in net profit of 10%. It was also a year rich in initiatives aimed at laying the foundations for a new period of growth in all regions: notably in Asia, with the opening of the new branch in China, a stronger presence in Thailand and Indonesia, and the latest acquisition in Australia. New projects were launched also in other markets, to catch new trends, with increasing attention paid to the sustainability issue: compostable capsules, which have recently been awarded the title of product of the year in France, one of the most mature markets for the coffee sector; fairtrade, rainforest and organic products; and the important non-GMO certification obtained by our plantation in Kauai, Hawaii.

2019 will also be a year rich in projects, in which we expect to reap the rewards of the initiatives launched this year, in order to achieve profitable and lasting growth. Business performance and efficient management of working capital allowed the Group to generate cash flows of over 60 million, before investments equal to Euro 32 million. Based on the results obtained and the positive expectations for the current year, we propose to the next Shareholders’ Meeting the distribution of a gross dividend of Euro 0.19 per share, up by 12% compared to last year.”

The Group’s consolidated revenue amounts to Euro 891.2 million in 2018, compared to Euro 956.1 million of 2017, a decrease of 6.8% at current exchange rates, – 4.3% at constant exchange rates compared to 2017.
Revenue, on a comparable basis*, decreased -3.9% compared to the previous year, mainly due to:
• the decrease in roasted coffee sales volumes, as explained before (-1.6% compared to 2017);
• the decrease of roasted coffee sales price resulting from the decrease in the average purchase price of green coffee which was partially offset by the positive effects of a different mix in the sales channels in 2018 and 2017.

(*) on a comparable basis: at constant exchange rates and with the retrospective application of IFRS 15 on 2017 revenue. For additional
information, please refer to the annex of this press release.
(**) before non-recurring costs of Euro 2.5 million in 2018 and Euro 6.3 million in 2017.

Revenue from the Food Service channel, which accounts for 23.4% of the Group’s revenue, amount to Euro 208.8 million, stable on last year on a comparable basis, with volume growth recorded in Americas and Apac and a slight decrease in Europe.

Performance of the Mass Market channel and Private Label channels, equal to 36.7% and 33.1% respectively of the Group’s revenue, is due to the decline in volumes of the Americas and the slight decrease of roasted coffee sales price as a consequence of the reduction of the cost of green coffee, as explained before.

Revenue from the Americas amounts to Euro 396.8 million (44.5% of the Group’s revenue) a 6.5% reduction on last year on a comparable basis. This performance is explained by the decrease of the Mass Market and Private Label channels, as already explained.

Revenue from Europe are slightly negative mainly due to the reduction in sales prices as a consequence of the decrease in the purchase price of green coffee.
Revenue from Asia-Pacific, which also include those from the international network of cafés, amount to Euro 78.9 million, up by 4.2% on a like for like basis, compared to 2017.

On a reported basis gross profit decreased by Euro 8.6 million explained by the unfavorable effect of exchange rates (with an impact of Euro 8.5 million, compared to 2017) and by the effect of IFRS 15.

The increase in Gross Profit from the sale of roasted coffee is in turn mainly due to the positive impact of the trends in sales and purchase prices respectively of roasted and green coffee and to the positive effect of the different mix in the sales channels in 2018 and 2017 (+3.3% compared to 2017), partially offset by the decrease in roasted coffee volumes (-1.7% compared to 2017).

On a comparable basis operating costs increased by Euro 4.0 million mainly due to:

i) growth initiatives with investments in management and structures also for the start-up of new branches, as in China, Indonesia and Thailand

ii) strengthening of the sales and marketing structure, mainly in Northern Europe.

EBITDA adjusted amounts to Euro 73.7 million (8.3% on revenue) compared with 75.0 million of 2017 (7.8% on revenues) a decrease of 1.6% at current FX. Excluding the negative impact of exchange rate fluctuations for Euro 1.2 million, EBITDA adjusted was stable compared with 2017. In the third and fourth quarter, the Group launched different projects aimed at further streamlining of business operations in Europe, which generated non-recurring charges of Euro 2.5 million.

Notably, the Group implemented measures to reorganize the productive and logistics structure of the Portuguese subsidiary Massimo Zanetti Beverage Iberia, aimed at increasing the efficiency and productive capacity of roasting systems at the local plant, to meet the growing European demand, also in the capsule sector.

Operating income (EBIT) amounts to Euro 36.4 million, an increase of +14.6% compared to Euro 31.7 million of 2017. In addition, as previously described for EBITDA, this increase is attributable to the decrease in amortization and depreciation, amounting to Euro 2.1 million, positively impacted by foreign exchange fluctuations for Euro 0.6 million.

The net profit amounts to Euro 19.9 million, up 9.9% compared to 2017.
In addition to as previously described for operating income, the increase is also due to the combined effect of:

• the decrease in net finance costs of Euro 0.7 million (-9.2% compared with 2017), mainly due to lower interest charges, equal to Euro 0.5 million;
• the increase in income taxes of Euro 3.5 million (+72.1% compared to 2017), due mainly to higher deferred taxes. In this regard, it should be noted that, in 2017, the Group had benefited from the tax reforms introduced by the US government.

Financial Statement of the Parent Company and other Resolutions

The Board of Directors also approved the financial statements of the parent company, Massimo Zanetti Beverage Group S.p.A., the annual report on corporate governance and ownership structure and the 2018 Consolidated non-financial statement (pursuant to Italian d. Lgs. n. 245/2016).

Proposed Dividend and calling of the Shareholders’ Meeting

The Board of directors resolved to propose to shareholders the distribution of a gross dividend of Euro 0.19 per ordinary share, for a total of approximately Euro 6,517,000.

In view of the results achieved in 2018 and considering current developments, the expectations relating to the performance of the Group for 2019, assuming the absence of extraordinary transactions, are as follows:
• slight increase in revenues* driven by:
– the improvement in product and channel mix
– growth in volumes in line with market trends
• increase in EBITDA adjusted * of approximately 3%- 5%
• taking into account the extraordinary transactions already announced in the first quarter of 2019, net debt is expected to be around Euro 195 million (*) at constant exchange rates These forecasts exclude the impact of the application of IFRS 16. 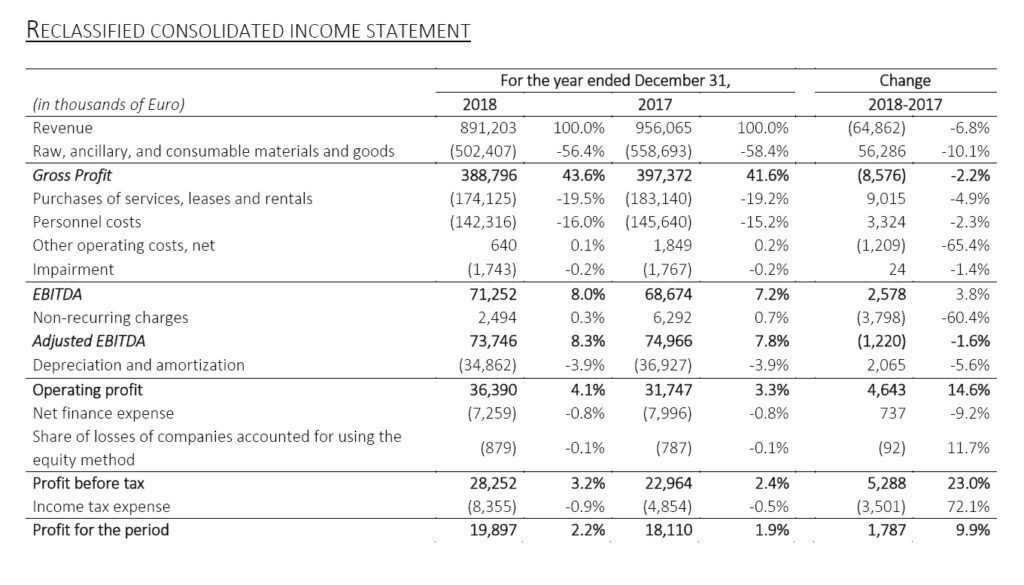 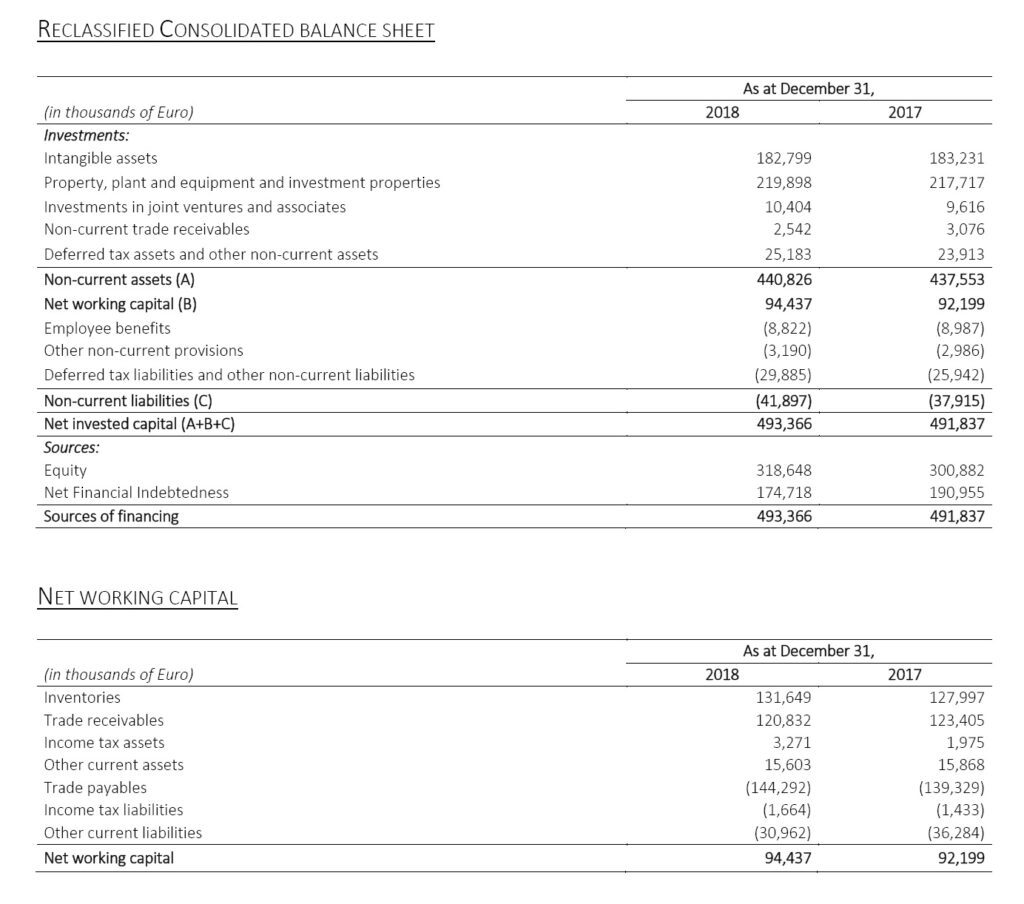 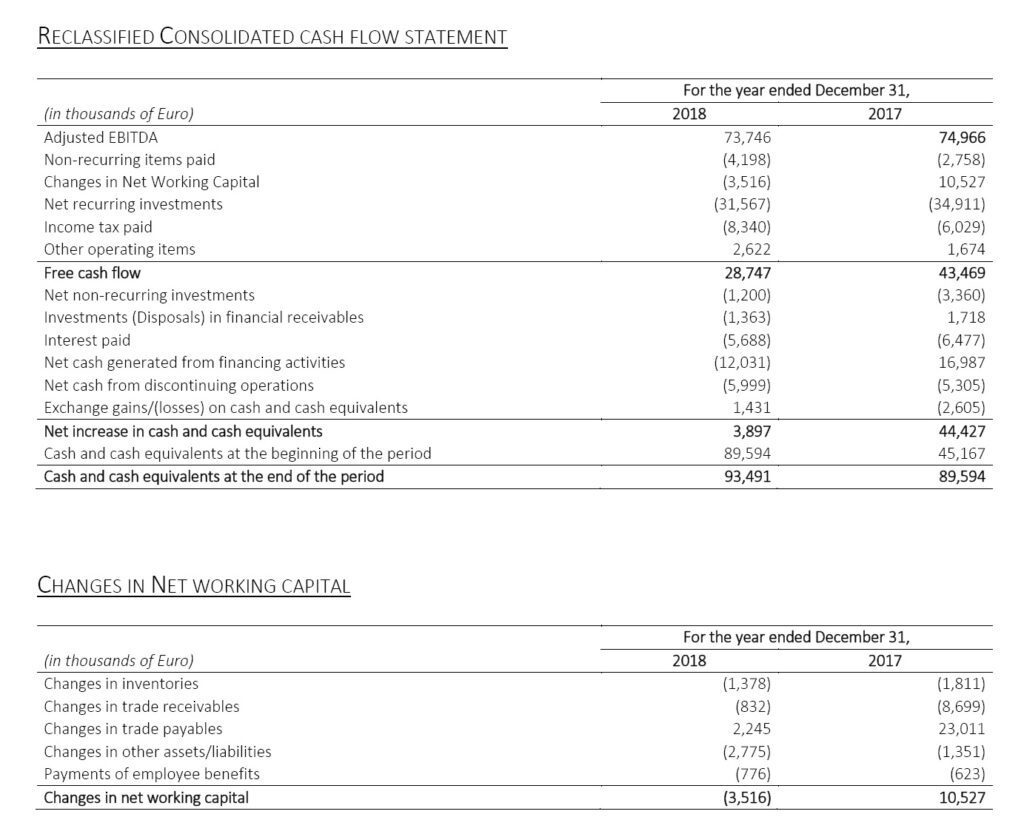 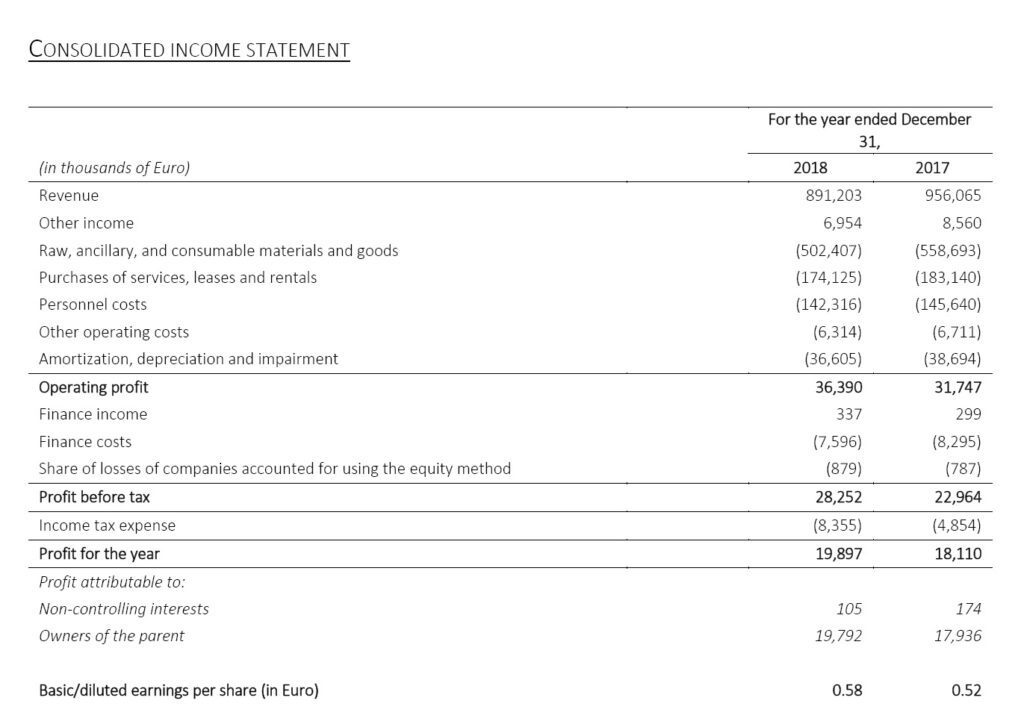 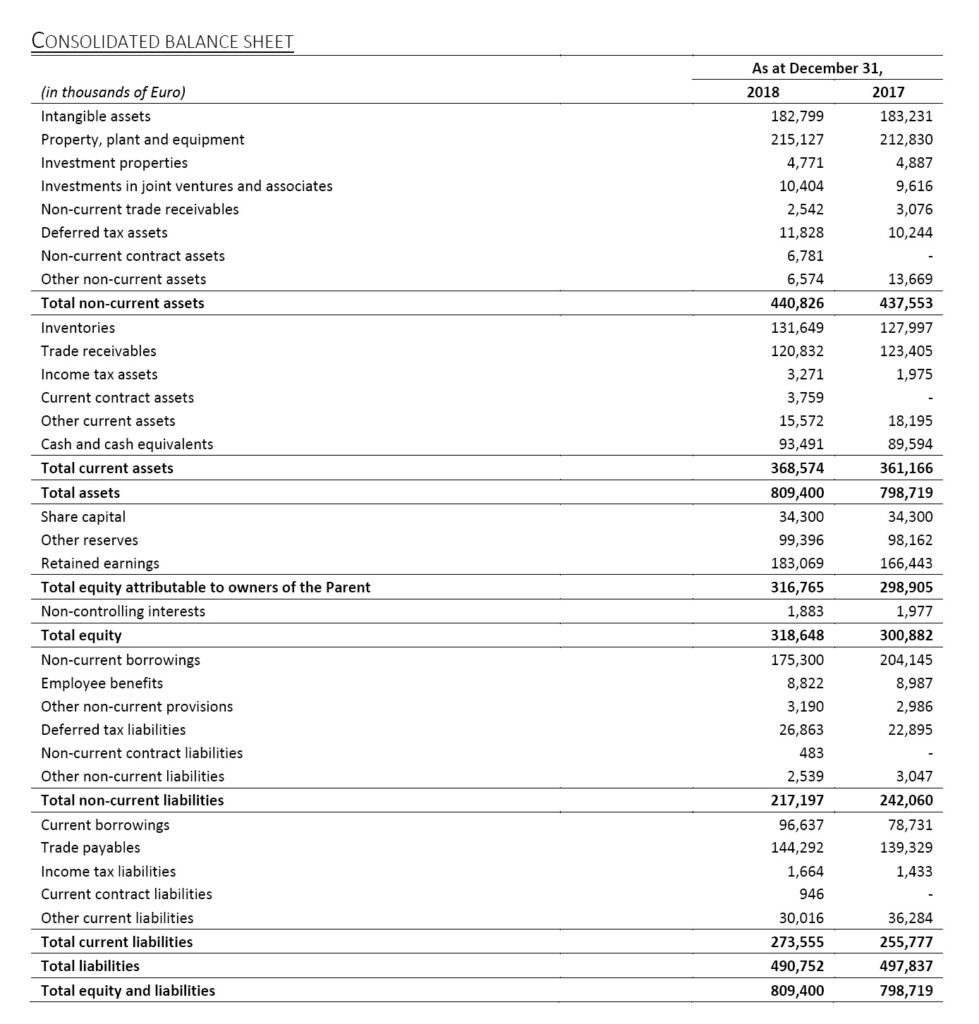 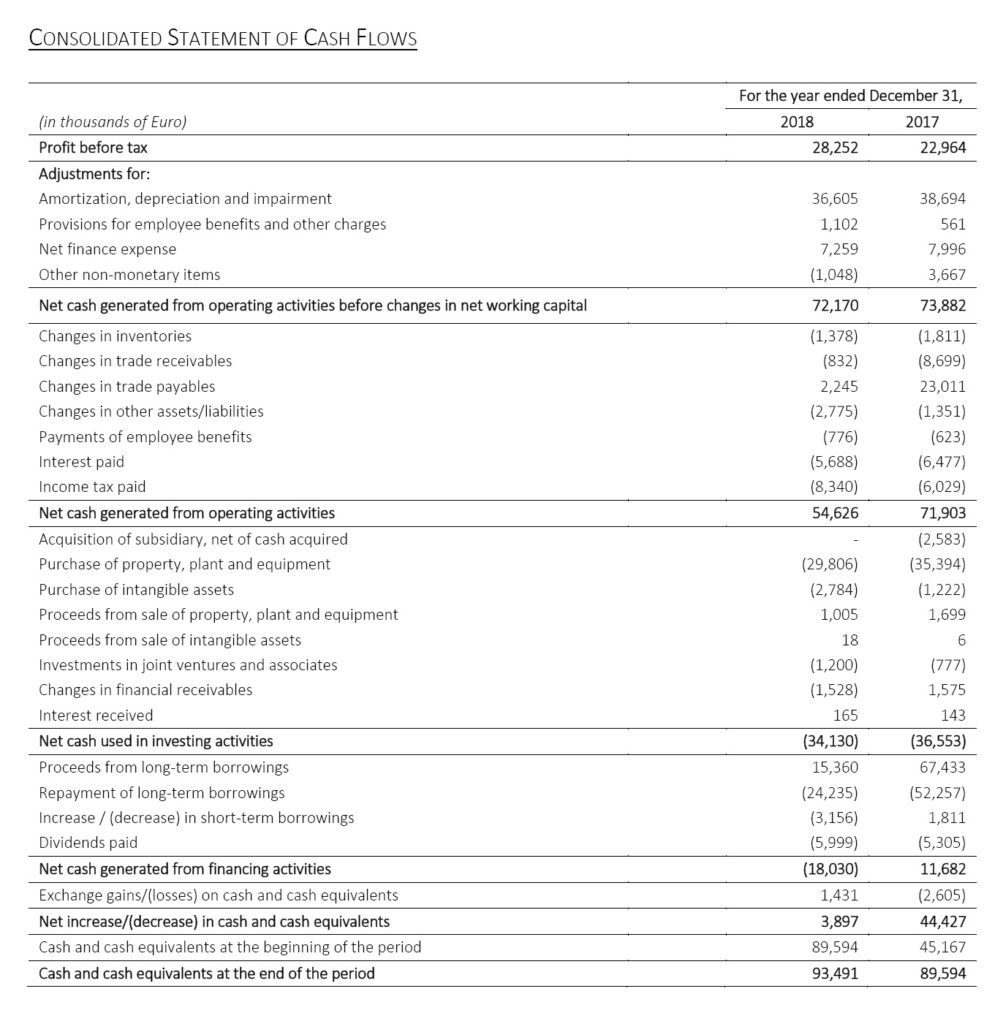 IFRS 15
Under IFRS 15, an entity shall account for consideration payable to a customer as a reduction of revenue unless the payment to the customer is in exchange for a distinct good or service received from the customer and measured at fair value. Therefore, as of January 1, 2018, the Group has reclassified this type of consideration from “purchases of services, leases and rentals” to a decrease in “revenue”. The application of IFRS 15 have implied in 2018 a reclassification from “Purchase of services, leases and rentals” to “Revenues” of Euro 4,624 thousand.

Tables below show the effect of the application of IFRS 15 on December 31, 2018 revenues:

IFRS 9
Under the new impairment model applicable to financial assets, the accruals to the allowance for impairment are based on expected losses rather than on the losses already incurred as set out in IAS 39.
The Group has applied the simplified approach envisaged by IFRS9 in order to asses the recoverability of its own trade receivables. The adjustment to the estimates done before, as shown in the following table with values as at January 1 2018, takes into account the default risk in trade receivables, through a differentiated “ expected default rate” which is applied to classes of trade receivables homogeneous in terms of risk profile and maturity or, for those in arrears, in terms of the actions taken to recover the credit. Please see also Note 3 “Management of Financial Risks”.
As mentioned above, when reporting the impact from the first adoption of IFRS 9, the Group has used the “modified retrospective method”. According to this method, the cumulated effects related to the implementation of the new standard are recorded in the “Retained Earnings” as at January 1 2018, without presenting the comparative amounts, as shown in the following table: