More grist to the mill for coffee waste: HuskeeCups are beautiful and durable 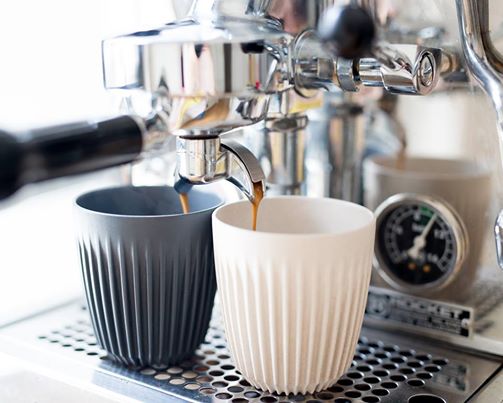 Coffee is one of the most widely consumed beverages in the world, and the industry has been really inventive when it comes to its waste. In London, Sydney and Paris for example, businesses are recovering coffee grounds to grow oyster mushrooms or produce organic fertilizer.

But another coffee waste is produced in abundance and is almost never recycled – the husks.

The thin film that surrounds the grain is organic waste – and vast quantities of the stuff can be found on coffee farms.

These husks represent around 3 kg of waste per year per coffee drinker, according to the collective behind the Huskee project in Australia. Hence the name! The project brings together coffee industry professionals who want to use this waste in a special product line. In other words how to repurpose the husks recovered when extracting coffee beans to make… coffee cups!

Combined with environmentally friendly additives and dyes, the husks become a new, unbreakable material that can be used to make coffee cups, along with universal saucers and even lids.

The founding members of Huskee Pty Ltd used the Kickstarter crowd-funding platform and a design studio to launch their project. A ristretto cup, the medium or long version HuskeeCups are beautiful, durable, reusable and dishwasher-friendly. In addition, they keep the coffee hotter for longer than traditional ceramic coffee cups and can be stacked without risk of breakage.

Their production should soon start in a unit in Yunnan, China – a region bordering Vietnam, Laos and Burma, which has now adopted coffee having already become a global tea capital. Why Yunnan? Because the director of the collective, Joshua Jagelman, is a coffee trader in the province and knows lots of coffee farmers.

The collective also includes Saxon Wright, a well-known figure in Sydney and founder of the hip Pablo & Rusty’s cafés and an ethical coffee roasting company that covers the whole of Australia. Adrian Chen, Michael Chin and Nicole Barnes – also involved in the project – are coffee sector specialists.

HuskeeCups can now be pre-ordered with delivery scheduled for April 2018 – the Australian start-up Huskee Pty Ltd is giving itself three years to collect feedback. Its sales representatives and ambassadors are now being deployed around the world with an ambitious goal: zero waste in the coffee sector, from the farm to the local café. A circular economy down to the very last grain!