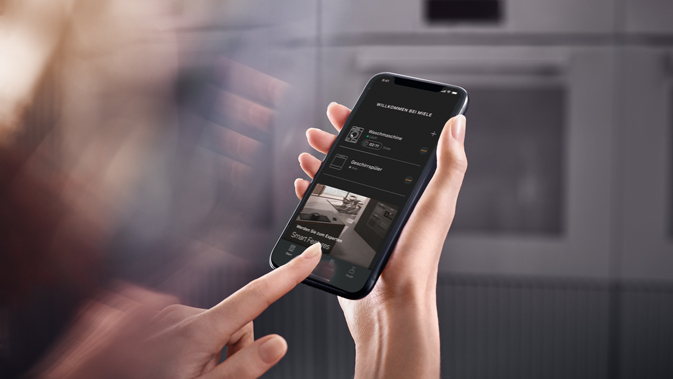 GÜTERSLOH, Germany – Miele is launching its new free-of-charge app to launch in 52 countries, spanning 26 product groups. ‘In this version, the app has a new name, a new design, improved performance, and is even easier to use’: What the release notes couch in the most reserved terms is once again a huge step forward for the 170,000 or so regular users of the Miele app.

which make operating smart domestic appliances, including the integration of service, even more concise and much more fun. In short, Miele is taking ‘user experience’ to the next level.

One challenge in redeveloping the Miele app was, for example, to integrate a more complex range of functions in a way which is still user-friendly. From the washing machine to the Dialog oven, this app covers 26 product groups and increases the number of machine-specific use cases several-fold. In the course of this, Miele has further simplified the registration process known as ‘pairing’.

The primary user interface is a dashboard in a low-key design with fast access to all machines. Navigation to further features, for instance an overview of all smart assistants, is intuitive and inspiring. The hygiene assistant is a new feature which prompts the user to run a higher-temperature programme after a series of low-temperature cycles in the interest of hygiene.

Familiar applications have been retained and have even been expanded, including CookAssist, step-by-step instructions to arrive at perfect frying results, and the BaristaAssistant which makes a series of coffees ‘tasting-style’ to arrive at the perfect espresso. The recipe feature in the Miele app is freely accessible to all users and includes a whole host of preparation suggestions which are tailored to special features of Miele appliances (e.g. functions such as Moisture Plus and combination cooking).

With Smart Food ID and Smart Browning Control, the new app for the first time includes pay-for applications for ovens which can be remotely uploaded (currently only for Denmark). This feature relies on an integrated camera inside the oven which recognises food. In the pipeline, too, is a new in-app shop: More than 1,000 consumables and accessories can later be ordered from Miele via the app (without having to switch to the Miele online shop, feature is currently only available in Great Britain).

Altogether, the app is available worldwide in no fewer than 52 countries. Its launch will be accompanied by a social media campaign on Instagram which is due to start from mid-July onwards. During the course of this year, further releases introducing improvements are planned, together with continued development of the range of recipes. New, too, is an independent area on the Miele website (miele.de/mieleathome) presenting the full range of domestic appliance connectivity options, including the integration of Miele appliances into external platforms such as Telekom Magenta or Conrad Connect as well as facilitating voice control.

Miele has taught its new RX 3 robotic vacuum cleaner how to communicate with Amazon’s Alexa voice assistant, and it even works for pre-defined areas: ‘Alexa, tell Miele to vacuum-clean the kitchen’. The new application for cooker hoods is even more illustrative. With the models Aura 4.0 and Pearl, Miele has two hoods with ambient room lighting in its range. Via Alexa, these can now be embedded into scenarios: The door-bell rings and the hood lights up as an additional optical indication. Naturally, a feature like this can also be used to conjure up a feel-good atmosphere: The ‘Alexa, relax’ command could, for example, put the blinds down, play your favourite music and switch on soothing ambient lighting on the Aura canopy. Fantasy knows no bounds.