ABIDJAN, Côte d’Ivoire – This review of the cocoa market situation provides a brief on the September-2020 (SEP-20) and December-2020 (DEC-20) futures contracts prices listed on ICE Futures Europe (London) and ICE Futures U.S. (New York) during the month of September 2020. It aims to highlight key insights on expected market developments and the effect of the exchange rate on the US-denominated prices of the said contracts.

Hence, by monitoring the evolution of the US dollar index in September, one can extricate the impact of the US dollar exchange rate on the development of the futures prices – denominated in US dollar – during the period under review.

Finally, Figure 3 presents monthly averages of cocoa butter and powder prices in Europe and the United States during the 2019/20 crop year. 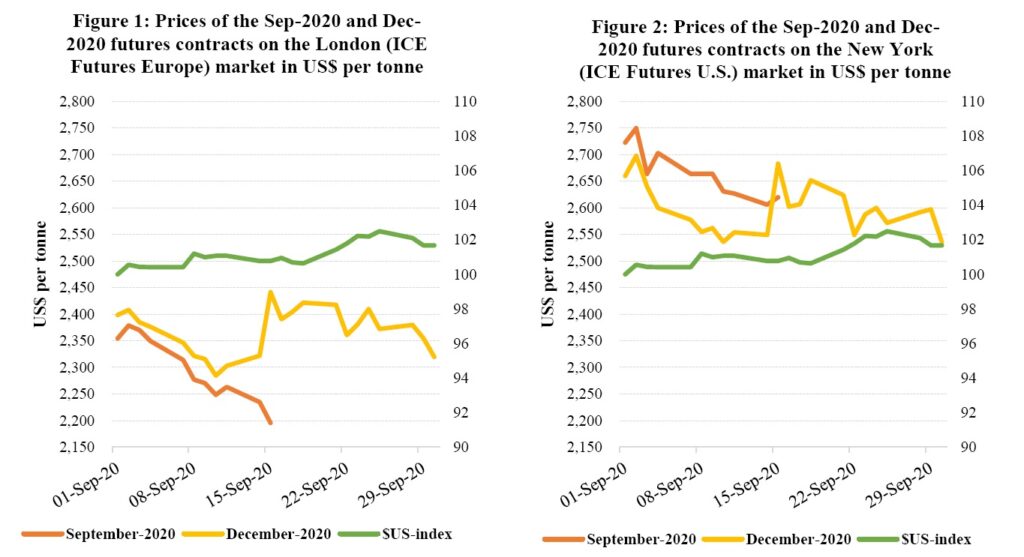 The contango price configuration observed in London during August continued in September. Indeed, as outlined in Figure 1, the front-month cocoa futures contract (SEP-20) priced with an average discount of US$59 per tonne over the DEC-20 futures contract.

At the time, the share of Bulk Delivery Units – which are mainly made of inferior quality cocoa in certified stocks increased from 41% or 47,727 tonnes to 45% or 50,955 tonnes in the ICE Europe licensed warehouses. In New York, the market remained in backwardation (Figure 2).

Compared to the DEC-20 futures contract, the SEP-20 contract traded with an average premium of US$64 per tonne. Over there, the volumes of certified stocks sharply declined year-on-year by 52% moving from 29,935 tonnes to 14,284 tonnes as Ivorian certified stocks of cocoa beans in the USA were depleted – by 63% to 7,592 tonnes compared to 20,312 tonnes seen a year earlier.

This bearish stance resulted from the appreciation of the U.S. dollar combined with reports that robust cocoa supplies were recorded from Côte d’Ivoire.

Thereafter, the DEC-20 contract prices climbed to a 1-week high on 15 September on both the London and New York markets in reaction to the dry weather that prevailed in West Africa and the likelihood that potential political disputes could disrupt cocoa supplies from Côte d’Ivoire.

However, the observed price hike was brief, and over 16-30 September, prices halted their increase and tumbled by 3% on both markets. In London, prices plunged from US$2,390 to US$2,320 per tonne while in New York, they shrank from US$2,602 to US$2,536 per tonne as the U.S. dollar further appreciated.

Movements of cocoa futures and cocoa butter prices are positively correlated, whereas the inverse occurs with cocoa powder prices. 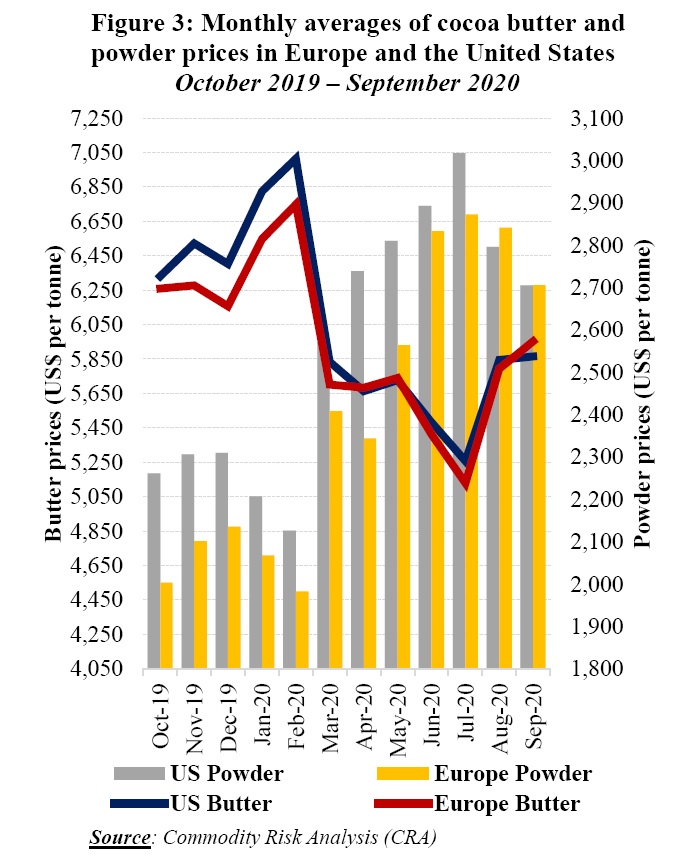 Figure 3 shows that compared with the average prices recorded at the start of the 2019/20 cocoa year, prices for cocoa butter were down during September in both Europe and the United States.

In addition, compared to their average values recorded at the start of the 2019/20 cocoa year, the front-month cocoa futures contract prices contracted by 3% from US$2,423 to US$2,339 in London at the end of September 2020. Conversely in New York, prices of the first position cocoa contract increased by 7% from US$2,467 to US$2,629 per tonne over the same period.

At the end of the 2019/20 cocoa season, cumulative arrivals of cocoa beans in Côte d’Ivoire were reported to have reached 2.074 million tonnes, down by 4.8% from the 2.179 million tonnes recorded at the same period last season.

Over the same period, exports of cocoa semi-finished products from Côte d’Ivoire attained 404,646 tonnes, down by 2% from 412,577 tonnes recorded a year earlier.

At the start of the 2020/21 cocoa season, Côte d’Ivoire and Ghana opened the marketing season by announcing substantial increases in their farm gate prices. In Côte d’Ivoire, the farm gate price of cocoa beans was established at XOF1,000 (US$1,802) per tonne, up by 21% from XOF825 (US$1,487) per tonne paid last season.

Icco revises its estimates of world production, grindings, and stocks for 2019/20 cocoa year