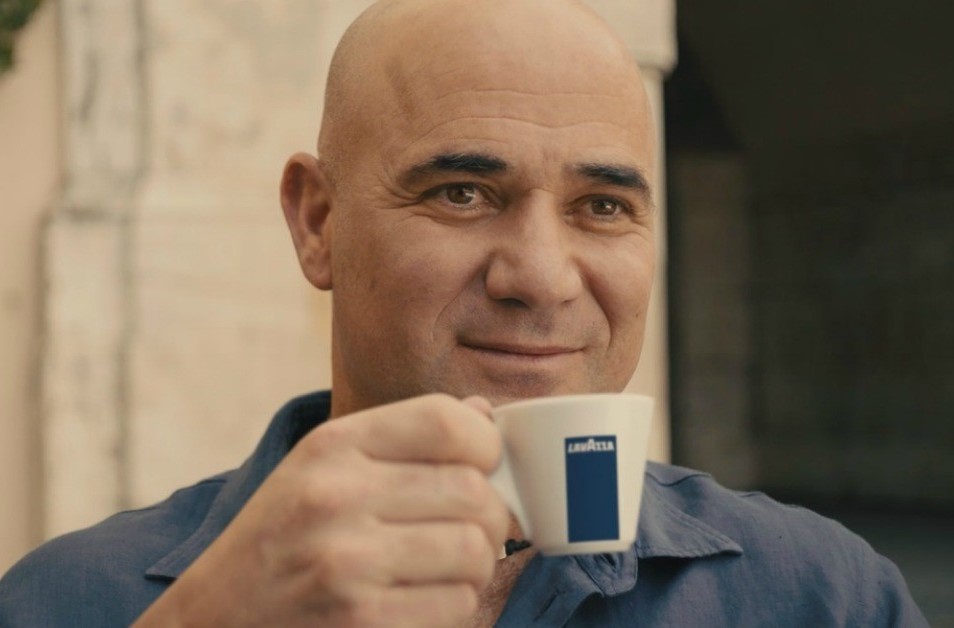 NEW YORK CITY, USA – Lavazza has announced details of a new global collaboration featuring tennis legend, Andre Agassi. The partnership positions Agassi as Lavazza’s spokesperson for the world of tennis, and officially kicks off this evening at the US Open with a special event and promotion for spectators, along with teasers taking place in the morning around New York City.

The 120-year-old authentic Italian family company based in Turin has been active in the world of tennis for many years, and in 2015 became the only food and beverage brand to partner with all four Grand Slams around the world.

An innovative coffee company, Lavazza searched for a partner that shared its pursuit of excellence in everything it does, and found just that in Andre Agassi.

Agassi is undoubtedly one of the greatest champions of all time, with an impressive track record of winning 60 ATP titles, 8 Grand Slam tournaments, and having the honor of being world number one six times, an Olympic gold medal and is one of the only athletes to have a Golden Slam (four Grand Slams and a Gold medal).

Vice Chairman, Marco Lavazza, states, “Lavazza is proud to unveil our new global partnership with one of history’s greatest athletes, Andre Agassi, and kicking it off with the ‘I’m Back’ campaign at the US Open.”

He added, “We began communicating the company’s passion for tennis over six years ago at Wimbledon, and tournaments quickly became one of our core strategic platforms from which to communicate our heritage, values and products.

Indeed, investing in the sport makes strategic sense for Lavazza: our target customer profile fits perfectly with that of a tennis fan, and beyond that, presence at key tournaments and the four Grand Slams gives us an opportunity to further showcase our quality products in key countries for the company.”

Andre Agassi commented, “In my autobiography I write about my life-long love for coffee, so it is a natural fit for me to be partnering with Lavazza, a company that has been at the forefront of the industry from day one.

Lavazza not only invented the coffee blend more than 120 years ago, but also works with passion to make the best quality and authentic Italian coffee I have known and loved for decades.”

With the new partnership, tennis fans around the world will be engaged via onsite events, promotions and personal appearances at the Grand Slams: the Australian Open (Melbourne), Roland Garros (Paris), Wimbledon (London) and US Open (New York), and at other select regional tournaments where Lavazza is present including the BNP Paribas Open (Indian Wells), the Mercedes Cup (Stuttgart), and the Rogers Cup (Toronto).

The I’m Back Campaign and Event

For the launch of the partnership, Lavazza took an innovative creative approach for the “I’m Back” campaign. The campaign is a build up to the official announcement that Andre Agassi is back at the US Open with Lavazza to “give back.”

To create buzz, the company began with a series of teasers posted on social media. Then, Lavazza amplified its message in New York City with a series of out-of-home ads strategically placed in key points, featuring a silhouette of Andre Agassi’s iconic 1980s look, complete with a neon pink headband.

Then, this morning, 150, 1980’s Agassi clones are being dispatched to run around New York City to interact with tennis fans in town for the US Open, helping to create anticipation for Agassi’s ultimate unveil at the US Open later this evening.

Between the first and second evening match, the clones will come together for a spectacular performance at the Arthur Ashe Stadium where a new advertising video spot will be unveiled (available on tennis.lavazza.com), officially welcoming Andre Agassi back to the US Open after more than 10 years.

Andre Agassi notes, “It has been such a wonderful experience working with the innovative brand from filming the ‘I’m back’ video in Italy, to conceptualizing a fun and engaging activation that is kicking off our partnership.

I look forward to seeing what the years ahead have in store for us.” He added, “I am very proud to be partnering with Lavazza, a company that shares not only my passion for tennis, but also an ethical commitment to children and education.”

Ten years ago, Andre Agassi said goodbye to the game of tennis — the game he changed forever. The same way Luigi Lavazza revolutionized the coffee industry by inventing the blend more than 120 years ago.

Now, the two brands with the same exciting, innovative spirits are teaming up to change the lives of underserved youth, starting at the US Open.

This year, for every coffee drink sold at the two on site Lavazza cafés, the company will donate $1 to the USTA Foundation to benefit the Andre Agassi Foundation for Education, which is dedicated to transforming public education and creating opportunities for children.

Funds raised will be specifically assigned to the foundation’s college readiness program “Summer of a Lifetime” at the Andre Agassi College Preparatory Academy school in Nevada (with more than 1,200 students) as well as financial assistance for college tuition.

Undoubtedly, Lavazza is bringing a boost of energy to the US Open this year with authentic Italian coffee.

Consumers at the stadium can enjoy Lavazza coffee at two Lavazza cafés and other points, where the aptly named “I’m Back” frappe drink will be available to be served in special edition glasses available for purchase.

This coffee drink was developed specifically for the US Open by Lavazza Training Center coffee specialists.