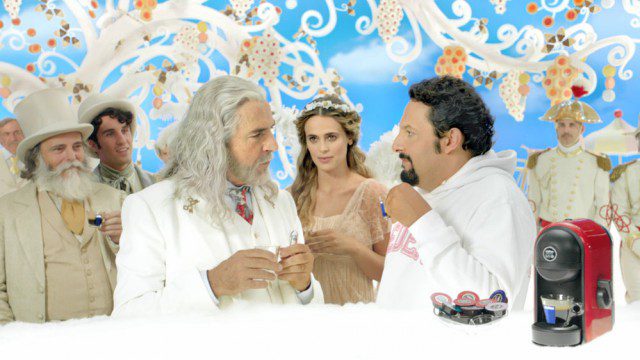 The new ad in the Lavazza Paradise campaign, dedicated to the A Modo Mio capsule system, and created by the Armando Testa agency made its debut on Sunday 23rd November.

In this new adventure the hero, Enrico Brignano is asked to take the A Modo Mio machine to the Garden of Eden, where there isn’t a coffee bar.

The Paradise ads continue and are confirmed as one of the best loved campaigns in Italy and they represent a unique example of success in Italy, for their longevity and high appreciation. The values that inspire the stories, the simplicity of the narrative, along with the steady adspend over the years, mean that Italians can identify emotionally with Lavazza Paradise.

In this ad Saint Peter is played by Tullio Solenghi, a welcome return for the first tenant of “Paradise”. Today Tullio Solenghi is the ideal character to take on the important role of Saint Peter, thanks to his wide-ranging experience in the theatre and on TV, his irony and his elegance and of course, to his previous appearances in “Paradise”.

There is no one better than him to make the most of his experience in Lavazza’s Paradise to reinterpret such an important and authoritative character as Saint Peter, who is often at the centre of the stories which have not only been fun but have also made people think about the themes of goodness, altruism, sharing, love and respect for people.

where the excellent stars have always been close to each other on the set. As well as the change from Garrone, to Solenghi with the current star, Enrico Brignano, this advertising series has featured numerous famous names and stars such as the duo

Lavazza offers their sincere thanks to Riccardo Garrone, who was splendid in his interpretation of Saint Peter for his professionalism and the passion with which he contributed to the success of the Paradise campaign.

The new spot was created by the Armando Testa agency with creative direction from Mauro Mortaroli, copy by Leonardo Manzini, directed by Alessandro

D’Alatri, production company Filmmaster Productions. It will air on all TV networks and on the web.

Lavazza presents the Brand Ambassadors for its new advertising campaig...