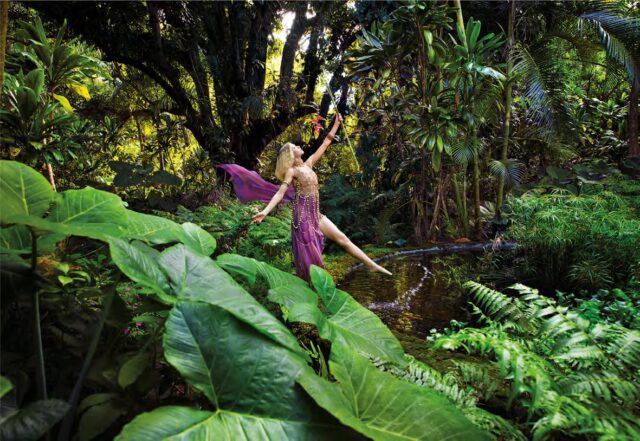 VENICE – The Lavazza 2020 calendar, with photos by American photographer David LaChapelle is a testament to poetry and the search for beauty as the way to reconnect us with the environment and give the planet a future. LaChapelle presented the project on Thursday in Venice together with Francesca Lavazza, a member of the board of the Lavazza Group, as well as Michele Mariani, creative director of the Armando Testa agency, and Denis Curti, director of La Casa dei Tre Oci.

The project encompasses the willingness to celebrate the power of beauty together with the idea of action, the belief that a human can personally take action to defend the environment.

This is the third time that Lavazza has chosen LaChapelle as the vehicle for the meaning of its brand, the first time being in 1993 for the first edition of its calendar.

The calendar, titled “Earth CelebrAction”, is the latest stop on the brand’s road to environmental sustainability, which Lavazza inaugurated in 2015 with the trilogy dedicated to the Earth Defenders, shot by the photographers Steve Curry, Joey Lawrence, and Denis Rouvre.

Through their views filled with humanity and empathy, they unforgettably represented the faces of those who protect the earth every day.

The search for positive stories that can portray a fragile ecosystem that is still full of powerful vital energy was followed up with the British photographer Platon, who in 2018 created the project “2030: What Are You Doing?” dedicated to the 17 UN Sustainable Development Goals.

The photos were taken in Hawaii, where LaChapelle has lived for several years on a sustainable farm.

LaChapelle, the “pop enfant terrible” discovered by Andy Warhol, experienced an existential change that increased his interest in landscape photography with a special focus on the environment.

Francesca Lavazza called his a “current vision that marries with that of the brand and that invites us to look at the earth as a place to guard and protect, safeguarding its beauty”.

Nature can still be beauty, a return to the source, a place in which to celebrate the joyous meaning of life, according to David LaChapelle.

The twelve images immortalise women divinities immersed in the powerful nature of the Hawaiian islands, with mythological visions and pop colours, oceans that suggest an uncontaminated world.

This is LaChapelle’s third experience with Lavazza, and in it he used the Hawaiian islands as a green curtain for the 12 photographs, to showcase a symbolic tale where the primary elements of fire, water, earth, and air mix in the presence of man.

The natural scenes of the calendar celebrate the beauty of life and the awareness of the reciprocity of all living things.

“Earth CelebrAction” brings with it the idea of opening oneself to the earth, in an ideal optimistic reconnection, one that is idyllic and able to look beyond the environmental emergency.

“I tried to show the magic of nature with fantasy images to create a sort of storybook, an ideal and spiritual way where the problems of climate change and exploitation of resources don’t loom,” LaChapelle said.

The message focuses on the positive invitation to reconnect oneself with nature, listening to its needs and saving it from savage exploitation.

She said the focus is ideally on “embracing, protecting, hosting”.

“Just as the earth is place and mother, in the same way we also must protect this planet and take care of this human society that lives there,” she said.

“Collaborating on Earth CelebrAction was an opportunity to continue on my imaginary journey, set in an idyllic paradise in which man and nature live together in harmony,” La Chapelle said.

“I am grateful for the total freedom of expression that was given to me by a company that I respect and that respects the planet,” he said.