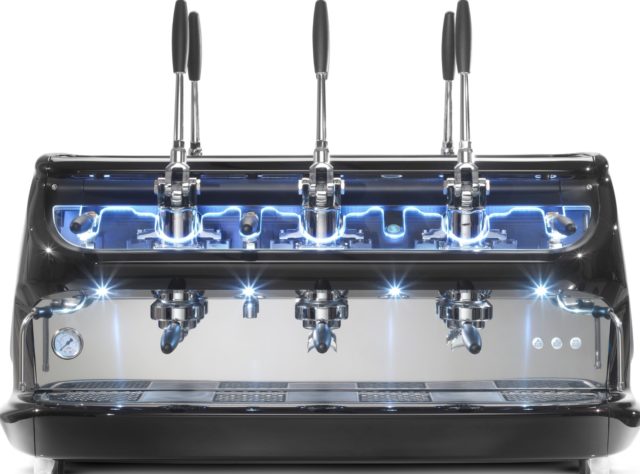 TRIESTE, Italy – Leva Class® V6, making its global debut at TriestEspresso Expo, is the jewel in La San Marco’s crown. A professional lever model with a dual-side work area: a one-of-a-kind machine which shakes up the concept of a café, encouraging a new coffee-drinking experience, one that is more social, interactive and personal.

The exclusive design, patented in partnership with Bonetto Design, takes its inspiration from the automotive world, shining the spotlight on elaborate internal components and the design of the bodywork.

The end result is in itself a tribute to the Italian coffee industry and above all, to that of traditional lever machines.

These are the figures behind the new V6, the latest lever machine by La San Marco, a historic Italian company located in Gradisca d’Isonzo (Gorizia).

Since 1920, it has manufactured some of the best-known espresso coffee machines and professional equipment in the world. The V6 made its world première on October 25, during the TriestEspresso Expo.

It represents a true revolution for the world of Italian espresso coffee. Its V-shaped structure (hence the name) forms a double-sided machine which shakes up the idea of a contemporary café and places the work of the barista, or in this case baristas, centre stage. 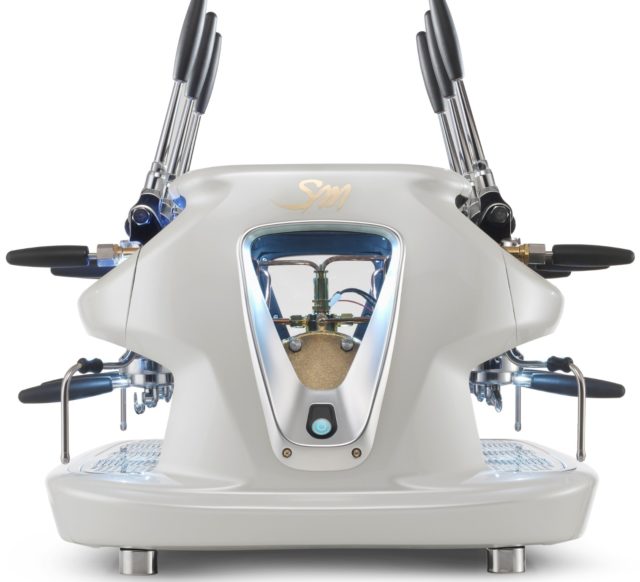 “With the V 6 we want to go one step further, towards the future of coffee machines, not just in terms of technology, design and safety, but also from the point of view of a genuine consumer experience” – states Roberto Nocera, CEO of La San Marco – “The V6 puts the art of coffee-making back in the spotlight and is an invitation to rediscover the café as a place in which to socialise, meet with friends and exchange ideas.”

The extraordinary, one-of-a-kind design is inspired by the lines of the motor sports world in the 1960s and 70s, designed by the prestigious Bonetto Design. 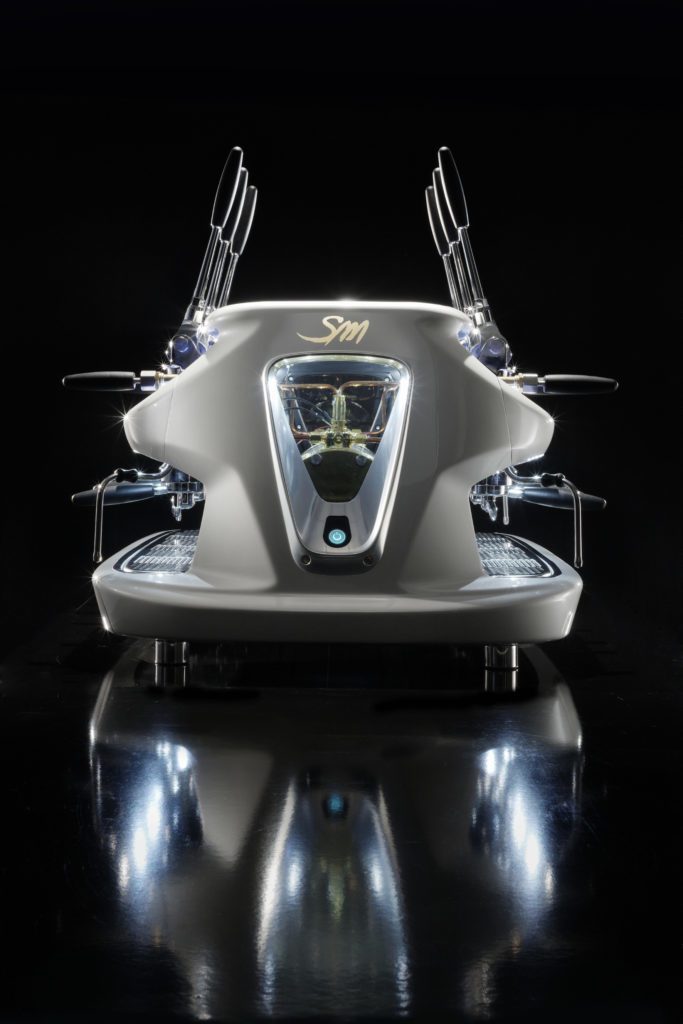 “Our work concentrates on combining the concepts of elegance, purity and precision with mechanical and automotive tradition.” – tells Marco Bonetto – “The lines are sculpted and dominant, but at the same time, they maintain a certain lightness thanks to the various transparent windows, in a perfect balance of weight”. 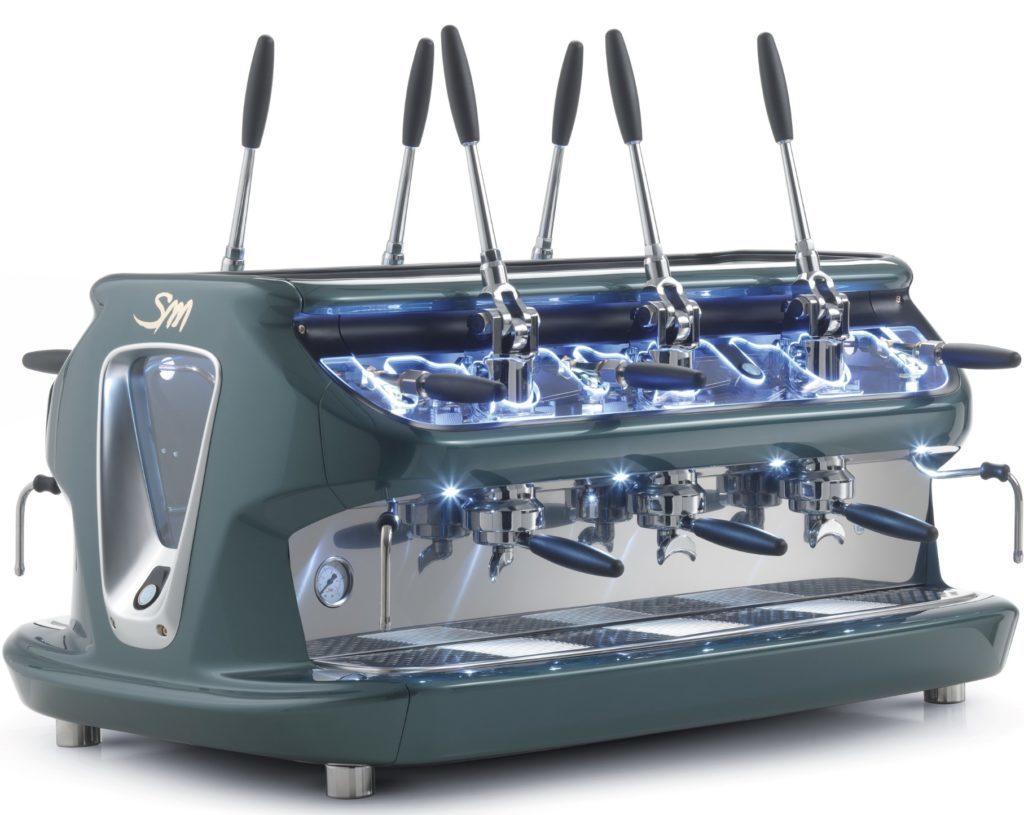 Sculpted yet sturdy, the V6 conveys all the power of its pulsing motor. The hydro-formed steel bodywork with painted finish and tempered glass, highlights the depth of the technical expertise of La San Marco in working materials and focuses on the sophistication of the components and meticulous precision of the inner workings. 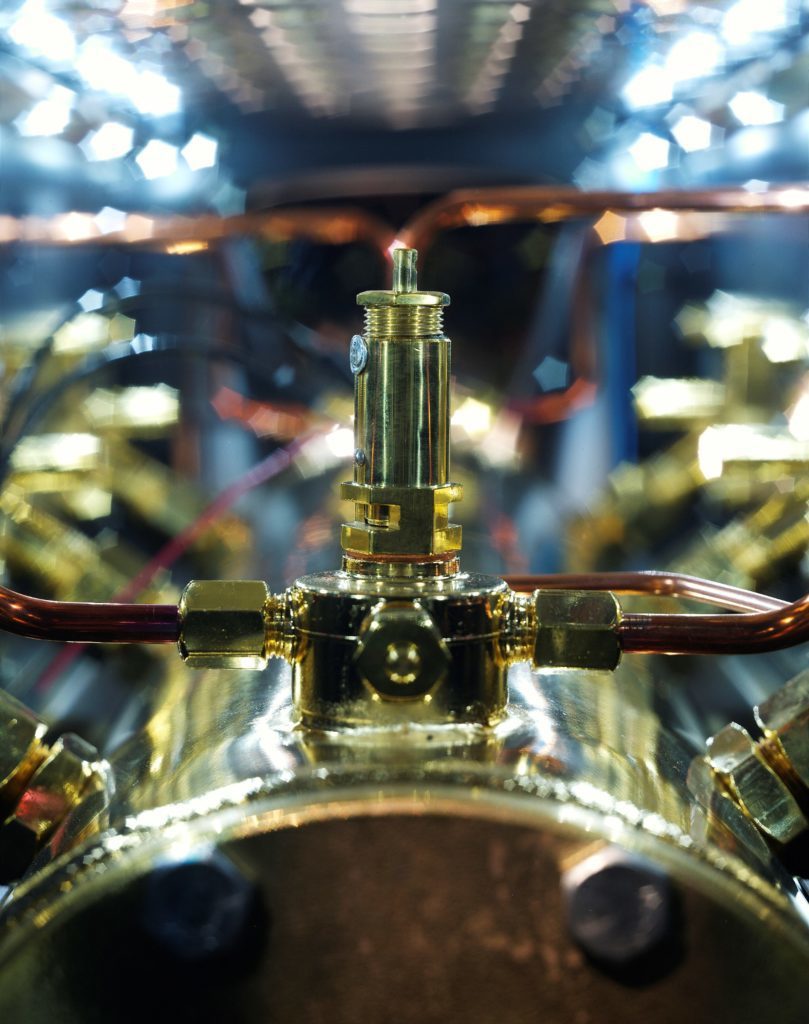 The model is available in the six-group version with three different finishes: pearl white Classic, black lava Avantgarde and Trieste pale blue Elegance. The boiler comes in two different versions, with a choice of mirror-finish stainless steel or gold-plated copper, while the hydraulic components are made of polished brass and copper. On a technological level, the V6 has an exclusive LEVA CLASS ® ( Controlled Lever Anti-Shock System) patent and PID system to control and electronically adjust the water temperature in the boiler. 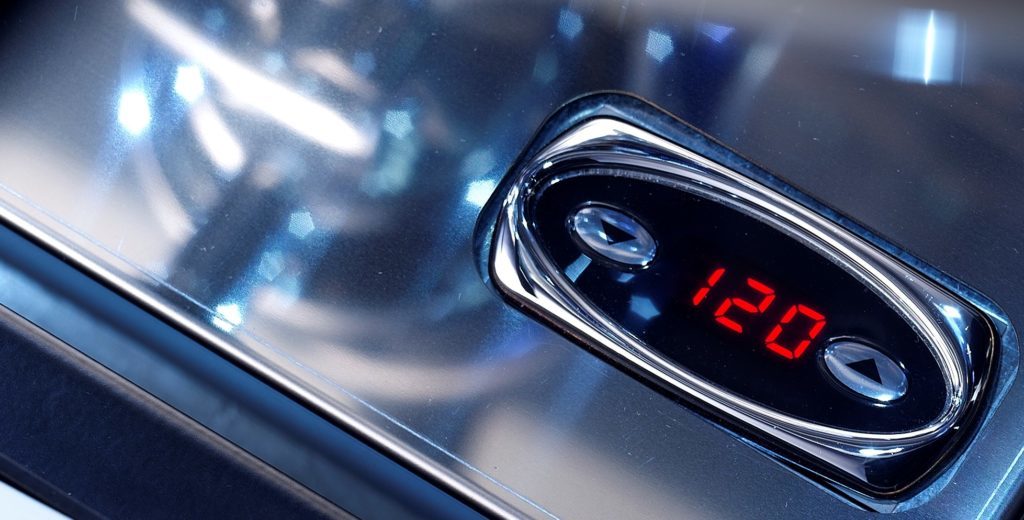 With the V6, La San Marco once again confirms its position as a leading innovator in the professional coffee machine industry and especially, the world of traditional lever machines. It has presented the world of coffee with a true gem, the result of a prestigious made in Italy manufacturing tradition, dating back almost a century.

The second edition to the Roma family, Roma Space is the new high-powered electronic coffee machine with an outstanding performance, despite its compact size (just 570 mm wide).

As a tribute to one of the most iconic and best-loved models in the world, La San Marco presents Top 80 Gold Preziosa, the first goldplated electronic coffee machine. Top 80 Gold Preziosa is the upgraded, visually stunning version of the previous New 80 Preziosa, featuring gleaming gold-plated bodywork, state-of-the-art electronics, revamped keypads and a display through which the operator can control and program the machine’s operating parameters. The same display also provides the operator with information about correct coffee brewing. The bodywork, made entirely of brass and stainless steel, is surmounted by the unmistakeable brass dome, which is, in turn, gold-plated. The highly skilled workmanship and top-quality finishes highlight the outstanding artisan expertise of La San Marco, while the interior of the machine showcases sophisticated, modern components. The result is the perfect combination of classic elegance and cutting-edge technology. Top 80 Gold Preziosa is available in the automatic two- and three-group electronic version with electronic coffee dosing, storing up to four different doses for each group. It is featured in the standard version with flow variator or in the version with DTC system.

The new Remote Control App by La San Marco is now available for remotely monitoring coffee machines. Currently available for the automatic models New 105 MB ACT and 100 Touch, the new system uses a handy app which allows users not only to connect to their machine via Bluetooth to monitor statistics and reset operating parameters, if necessary, but also to share them with other authorised users and receive technical support in real time, even from a distance. So, users, whether they are the owner, manager or barista, can use this application, made available by La San Marco, to email all the machine’s operating parameters in a single file to authorised recipients. The latter (support centres, dealers, distributors, coffee roasting stores, parent companies or agents) will, therefore, be able to check the data received and, if necessary, modify the file by inputting new operating parameters.

The modified file is then sent back to the user who can transfer it to the machine via Bluetooth and automatically activate the new configuration.

The new monitoring functions offered by the La San Marco app also include maintenance scheduling, checks on consumption, alarms and usage cycles. The new Remote Control App allows users to acquire and save the best operating configuration for their machine, so it can be replicated for new settings or used to configure other similar machines without have to set up a new program.

The La San Marco Remote Control App is easy to use with intuitive icons and can be downloaded free on any mobile Android device (smartphones and tablets) directly from the new website www.lasanmarco.com.

La San Marco, the undisputed global leader in the design and production of traditional lever coffee machines, introduces for the first time the innovative electronic water regulation system (PID) in two lever models, respectively the new V6 and the exclusive Luxury Leva. The PID system (acronym for Proportional-Integral-Derivative) not only allows you to control the water in the boiler, but also to easily adjust it. It acts by electronically modulating the energy supplied to the heating element, so the temperature remains constant, effectively replacing the current pressure switch. There are many advantages inherent in this system, not just in terms of energy and cost savings, but also from a practical point of view. In fact, thanks to the PID system, adjusting the boiler water temperature is easy, fast and intuitive and can be performed without the intervention of a technician. The system also makes it possible to produce an espresso coffee based on the desired taste and specific characteristics of the blend used. Lastly, the overall design of the machine from a purely aesthetic standpoint is greatly enhanced by eliminating the pressure switch and all its components.

La San Marco Spa is an Italian company, founded back in 1920, which has made a major contribution in successfully exporting the great Italian tradition of espresso coffee all over the world.

The company is now a leader among global manufacturers of coffee machines. By combining almost a century of tradition and techniques with cutting-edge, modern technology, the company, based in Gradisca d’Isonzo (Gorizia) in the north west of Italy, has contributed to the evolution of the entire sector, by proposing increasingly revolutionary and technologically advanced solutions.

These include the exclusive LEVA CLASS© (Controlled Lever Anti-Shock System) patent, specifically designed for traditional lever coffee machines, for which La San Marco is acknowledged as a global industry leader. La San Marco now manufactures a wide range of professional coffee machines, which are widely acknowledged for their excellent reliability, sophisticated design and the quality of the coffee produced.

The company also manufactures coffee capsule machines, dosing grinders and other equipment for cafés, restaurants and hotels situated in over 120 countries worldwide.

The latest innovations include ACT, SMART and the prestigious Leva Luxury coffee machine.